How do you spell dominant? I-G-A.

With the departure of Ash Barty from the WTA Tour, a door opened wide and Iga Swiatek stepped through. Since then she has not looked back. Iga has scored seven singles titles in 2022. She strung together a 37-match winning streak, two Grand Slams and a Slam semifinal appearance. After her decisive 6-0, 6-3 quarterfinal romp over Coco Gauff Friday at the San Diego Open WTA 500 at the Barnes Tennis Center, an eighth title is about as likely as a shock Padre win over the Dodgers in the playoffs.

While both Swiatek and Gauff are 5′ 9,” there are many differences. Coco is on her own path and at age 18 she’s come a long way from the girl standing on court in tears with Naomi Osaka following a third-round loss at the 2019 US Open when she was just 15. At 21, Iga is at a level beyond her peers in athleticism, consistency, movement, tactical decision making and ruthless focus. Equally significant, she’s successfully navigating the gauntlet of stardom’s demands. Her team does much of the heavy lifting concerning off-court matters so that her focus remains between the white lines.

Iga reminded us she’s only been on tour for a few years. Yet, her ability to handle pressure already seems the stuff of which legends are made. While she’s yet to prove herself on Wimbledon’s grass, that achievement seems inevitable. And, of course, she’s not flawless – who is? The Pole suffered recent losses in Warsaw and Ostrava – oh, well. Swiatek, a three-time Slam champ, thrives on big stages.

In the semis, Iga will face Coco’s doubles partner, Jesse Pegula, who is having a break-out year. The best WTA player Buffalo has ever produced has now reached No. 5, just like the best ATP player Buffalo has ever produced – Jimmy Arias. But Pegula , who handled Madison Keys this afternoon, will need to find some special keys tomorrow and push beyond her comfort zone to down Iga. Swiatek has dismissed Pegula this year in Miami, Paris and New York – ouch!

On the other side of the draw, Danielle Collins or a resurgent Donna Vekic await.

Returning from surgery, Croatian Vekic entered San Diego as a qualifier. Five matches later she’s taken out No. 7 Maria Sakkari, No. 22 Karolina Pliskova and No. 5 Aryna Sabalenka. As impressive as that sounds, standing in the way of Iga is like being in the path of a hurricane.

Tonight the Pole walked away feeling more comfortable than after her opening match. Her rhythm, efficiency and control of the battle produced a good day at the office. Iga dismissed Gauff in the French Open final and this time was even worse. She’s now confident that she has the ability to win matches even when she’s not playing her best. That’s what Serena always used to say. Confident and ascendent, Iga says she “feels like a world No. 1.”

Danielle Collins, who defeated Paula Badosa in straight sets in the evening’s final match, scored a huge win against the No. 1. She knocked Iga out of the Australian Open in the semifinals, 6-4, 6-1. And the 28-year-old Floridian beat Vekic in their only meeting. But that was four years ago in Miami. 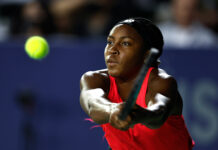