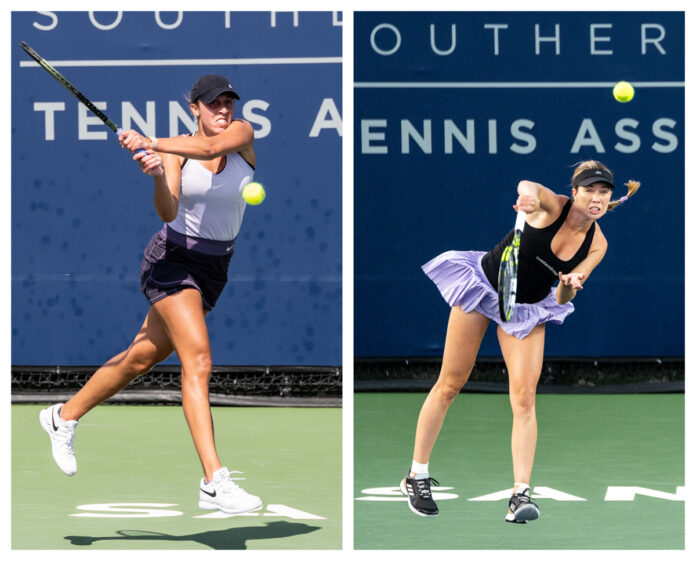 Already there have been many a twist and turn.

Post loss, a very candid Sakkari refused to make excuses and engaged in a heartfelt conversation about struggles, expectations and pressure. Yet, she sits at No. 7 in the WTA rankings. Many would envy that lofty achievement. The appealing Greek shared that she had overcome many tough situations.

Logically, Maria knows she’s a world-class athlete. Yet, finding the extra level day in and day out to win titles remains a heavyweight issue that has less to do with physicality, but rather gray matter. While she is not ready to discuss changes for 2023, she clearly has the desire to solve this paradoxical opportunity. Qualifier Vekic had a successful 2019 season. She faces former No. 1 Karolina Pliskova next.

On paper this was a rankings upset. However, the level between the No. 10 and No. 19 player this season is not huge. Given Danielle’s hardcourt strengths and her win over Garcia on the big stage in Melbourne en route to the Australian final, this was as a dead-heat match.

Collins took immediate control of the first set. She was by far the more aggressive player, attacking serves and stepping well inside the baseline on second serves. Her message was clear. I’m all about the pressure. She took risks with her serve and they paid off as she won 76% of her first-serve points. Garcia appeared flat in the first set. She struggled to return serve and handle the pace delivered by Danielle.

Caroline reset well in the second forcing a breaker with creative shots and serve placement. In the breaker Collins quickly grabbed the lead 2-0. While Garcia raised her level, Collins did not yield.

Post-match the Floridian spoke of her absolute love of competing. Competition is at the heart of everything she does – card games, trivia, you name it. She has the gene and uses it well. She will face No. 31, Martina Trevisan next. Danielle knows the Italian loves to compete as much as she does. She will take nothing for granted. We can expect to hear lots of spirited “C’mon” anthems from the pair.

Keys was pleased with her straight forward start in San Diego. She revealed the she jumped at the chance to compete here. Monday was her first meeting with Perez.

Post-match a relaxed Keys spoke about her love of tennis and travel which began at age 11. She recalled the days without cell phones and how the real challenge was finding a way to do homework and calling mom from the road. These days Madison has well-honed travel skills along with her powerful game.

One of her rituals is to seek out the best coffee establishments. Off court, she dedicates time heading up her Kindness Wins charity that combat on-line bullying. One role she won’t own is restructuring the WTA schedule. Keys, Pegula and Gauff acknowledged that changes are needed to avoid injury, minimize jet lag and to allow players to participate in team events such as the Billie Jean King Cup. Citing this reason, Iga Swiatek has elected not to play which is a loss for everyone. Madison stated, finding a viable solution is, “above her pay grade.”

If matches were given titles, this one would read, “It’s complicated!” There were flashes of the 2019 US Open when she won the title and moments of extreme frustration. The player personalities and game styles were like Jekyll and Hyde.

Assuming her signature warrior stance, Bianca demonstrated her ability to change pace, direction and the strike zone of her opponent. Employing a steady hand Liudmila found the lines forcing the Canadian to play one more ball with success. Despite going toe-to-toe in the first set, Andreescu owned the tie-break, 7-1. Her familiar lobs on the run, slides, and emotional celebrations engaged fans on the late night.

Post-match, Bianca spoke to really feeling her body and of a date night with an ice bath. She was seen shaking out her arms and checking her knee after a brief stumble.

No. 23 ranked Liudmila Samsonova has had a late season surge winning the Tokyo, Washington DC, and Cleveland hardcourt events. She reached a career high of No. 23 and produced a fourth round finish at the US Open. Just when the Canadian seemed to have control, Samsonova painted the lines or served up an ace.

Bianca reflected on the tight battle stating, “The match was very tight and it could have gone either way, I felt towards the end I felt I was putting a little bit more pressure than she was and I was a little bit more consistent.”

While Andresscu is ranked No. 57, she has not forgotten how to win. I am reminded at 22-years-old, she is one of an elite group who has two title wins over Serena Williams, at the 2019 US Open and Canadian Open. Even when her body does not cooperate, she seems to master mind over matter. Due to health concerns, she has played only 10 events this season. San Diego was her first match following the US Open. She took a much-needed wellness break as the tour schedule struck again.

Put simply, Daria was firing on all cylinders Tuesday, just as she did in August when she swept to the title in San Jose. In contrast, Leylah struggled to control unforced errors. Daria “I can’t miss” Kasatkina stepped on court and there was no stopping her. The Russian, who announced her gay relationship earlier this year, moved well, created pace, and was effective in her shot selection. She was steady and calm.

Daria’s anticipation was flawless. She kept Leylah off balance giving the Canadian few chances to turn things around. Despite her disappointment, Leylah reflected on the support she receives from tour players and that support eases the adjustments to tour life. Iga, Coco Gauff, Sloane Stephens and comedian Frances Tiafoe have been particularly supportive.

Daria circumnavigated the globe to reach San Diego. If her form continues, she is a threat to anyone in the draw. Rain drops spilled during her presser perhaps bringing winds of change? Tonight, she’ll retreat to her hotel, order PF Chang’s and try not to think about her next opponent, Madison Keys, or staying on course to secure a spot in the WTA Year-End Finals.

Following two rain delay breaks, the night session was postponed. The second night match pitted the rising 18-year-old qualifier Robin Montgomery, who is another product of Maryland’s JTCC, versus Coco Gauff and remains a cliff hanger with Coco taking the first set 6-3 and leading 3-2 in the second to be resumed on Wednesday. It’s the first time Coco has played in a main draw match against a foe who is younger than she.

Iga is bigger than ever

Tuesday brought the French Open and US Open and world No. 1 Iga Swiatek to the Barnes Tennis Center.

Coming off a final loss in Ostrava, Iga is not over analyzing everything the way she used to. In doing so, she has found a key to keeping her nerves in check. She is surprised to feel fresh and not jet lagged. She remains motivated after a long successful season. Her mood was sharp and playful in her opening presser as she joked around with her team.

Today is her first visit to San Diego. At home it is chilly and she got sick so she’s happy to be in sunny California. Perhaps the joke is on her? Tennis is not her whole life. She enjoys music, reading, and watching television. Iga fondly recalled attending an Eagles concert last year. She is pleased to be able to participate in activities that make an impact for Ukraine as she learning about being a high-profile person. However, she stated, “She does not want to be the face of everything.”

How the heavens chose this week to bring rain to an arid beach town is a mystery? Like a good thriller, the plot thickens Wednesday with Jesse Pegula, Bianca Andreescu, Karolina Pliskova, Danielle Collins and Coco Gauff or Robin Montgomery in play. Thursday avid reader Iga Swiatek will pick up her racquet to write her final chapter of 2022.