Has sports ever served up two back-to-back retirement circuses as dramatic as Serena’s and Roger’s departures?

Their retirements have not exactly been quiet strolls into the sunset. And they shouldn’t be. Along with Rafa, aren’t they the game’s two splashiest stars?

After a dazzling appearance on the cover of Vogue, along with a long essay about her retirement, Serena dominated the first week of a Slam like no other player had ever done. Millions celebrated, with lavish, loud, unharnessed, neon zeal. Excess was not a problem.

The US Open turned into a “C’mon down!” love-in, complete with an homage from Oprah, a poem from Queen Latifah, tweets from celebs LeBron and Michelle Obama and a curious twist from Serena herself: she said she was evolving from, not retiring from, tennis. The 40-year-old diva left the door just slightly ajar – a perfect “Don’t forget about me” tease.

Just 13 days after Serena had left the stage, the world was again stunned. Federer announced his retirement.

Remember, Eleanor Preston once quipped, “Is it possible that Federer is the most perfect tennis player, the most most perfect man – in the history of everything? Ever?” Not surprisingly, Roger’s farewell had an air of perfection.

He and his team had known for months that he’d be stepping down, but there were no leaks. Roger wasn’t on the cover of a fashion magazine, but, like Serena, he offered a thoughtful reflection on his career in a tweet. Federer then indicated that he’d end his career playing doubles with Rafa Nadal in a must-watch Laver Cup match on Friday. And he shared many thoughts in a series of interviews and press conferences.

He reviewed his long-standing struggles with his right knee and said that at 41 he could have “risked it all” to try to make a singles comeback, but a devastating medical scan, the counsel of his family and advisors, and the unflinching realities of Father Time informed him that the moment had come to draw his glorious 24-year career to a close.

Federer’s journey had four eras. Early on, he was a star in the making, whose raw talent and temper were clear. The boy wonder, who’d taken down the reigning Wimbledon king, Pete Sampras, in 2001, would then blast his way into a period of astonishing dominance. He won 11 of 16 Slams from 2004 to 2007, and when he broke Sampras’s record of 14 majors, tennis anointed him as the obvious and prevailing GOAT.

But then a muscular Spanish conquistador and a Serbian warrior had other ideas. Roger, whose mindset shifted when he became the father of twins, went through a kind of underdog era in which he was playing catch up. Then, at the 2017 Australian Open, he scored what he calls his most surprising win.

Finally, his career, which had been notably free of major injuries, would be dominated by his effort to recover from a right knee injury that started when he was bathing his twin daughters.

This week in London, Federer has been bathing the media in insights, and exciting fans with the prospect of bowing out while playing doubles beside his greatest rival – Rafa Nadal.

In three languages, Roger recalled the balanced role of his caring parents, how unhinged all the young tennis players he grew up with were, and just how thrilling competition is: “I love tying my shoes, getting ready, putting the bandanna on. I look in the mirror: Are we ready for this? Yeah, okay, let’s go.’ As much as I love it, I’m happy I don’t have to go through it again. Having those knots in my tummy, waiting all day, eating breakfast, thinking, ‘Tonight, I’ve got another big match.’”

Few have loved the circuit more than Federer. This is the man who recently told us, “When you do something best in life, you really don’t want to give it up…I need the fire, the excitement, the whole roller coaster.”

Still, he made it clear that tennis is a relentless grind of long practices, long waits and long trips. But more than anything, Roger feels, it is the fans who make it all worthwhile: “I know these people came from a faraway place, spent a lot of money, took time off from their vacation or from work and came to watch me play. I’ll miss that.”

Federer emphasized that he relied on his solid team. He admitted that during his recent rehab he’d gotten very pessimistic. “[But] at some point you sit down and go: ‘OK, we are at an intersection here, at a crossroad, and you have to take a turn. Which way is it?’ I was not willing to go into the direction of, ‘Let’s risk it all.’”

So this week the press asked him about his most important wins. Roger replied, “First Wimbledon, the match with Sampras at Wimbledon, the 2017 comeback, winning Australia, ’09 French Open.”

When asked about what he wanted to be remembered for, he responded, “[My] longevity. I was famous for being quite erratic at the beginning of my career…then to become one of the most consistent players ever is quite a shock to me…I always looked to the Michael Schumachers, Tiger Woods, all the other guys that stayed for so long at the top…I didn’t understand how they did it. Next thing you know, you’re part of that group.”

Federer offered a nuanced view of the GOAT debate. He told the AP’s Howard Fendrich that people like to compare things, but “I am my own career, my own player, [and I] needed those challenges. [Rafa and Novak] needed a challenger like myself. We made each other better. So at the end of the day, we’ll all shake hands and be like, ‘That was awesome.’ Now is somebody going to be happier than the other? In moments, maybe…I’m definitely very proud and happy where I sit. One of my big moments…was winning my fifteenth slam at Wimbledon, when Pete was sitting there. Anything after that was a bonus. That was the record and, of course, other records came along the way…[Now] it will only increase, players will want to chase records…I probably did, as well…[when] I got closer to Pete’s record.

“For me, it was [more] about how did I manage my schedule, was I happy? Did I like my life on the tour? And I did. I think I had the best of times…I was able to win another five Slams from ‘15 on…It was incredible. Then I made it to over 100 titles, and all that stuff has been fantastic…I don’t need all the records to be happy.”

Federer also recalled how many people were certain that tennis would be doomed after Sampras and Andre Agassi left. But the game obviously has prospered, and Roger feels that tennis is now in the good hands of an array of speedy, athletic talents, and the sport’s future is bright.

In addition to his longevity, Federer said he was also pleased with the beauty he brought to the game. He seemed especially proud of his resilience and grit. He observed that, “You need everything, especially grit and fight and all that toughness, to come through and stay at the top for as long as I did…It’s not gifted or handed to you…I had to go and find it…I was more lucky…with racquet head speed or that stuff…[But] I was criticized a lot, fairly or unfairly…Why wouldn’t I fight more when losing? Because they thought…I didn’t give it all I had…Do I have to grunt, do I have to sweat more, shout more, be more aggressive towards my opponents? What is it? It’s not me…That’s not my personality.

“A lot of people told me, ‘You have to be tougher and not so nice.’ I tried, but that was all an act. And I said, ‘Well, I will try it the nice way. Let’s see where it takes me. Let me just try to be normal and be myself.’ I’m very happy I was able to stay authentic and be myself for this long…I’m very happy I was able to have a good relationship with players, tournament directors, press, and that’s why I think I had as much fun at the tour as I had.”

Federer admits that he is in part famous for his losses. “I do believe things happen for a reason,” he said. He notes that his losses were what made him grow, but he’s “happy I don’t have flashbacks to tough moments…I see more the happiness, me with a trophy, me winning, my winning moments. I’m happy my brain allows me to think this way, because I know it’s not easy to push defeats away.”

Roger said he wants to go on vacation after the Laver Cup, and then, “I want to read a lot of what you have written, and a lot of TV stuff.” He added that he loves tennis so much that he could not imagine being away from it and shocked himself when he realized that he might even consider doing some TV commentary.

In the end, Roger admits there’s a “bitterness” in retiring: “ You always want to play forever. I love being out on court, I love playing against the guys, I love traveling…[and] winning, and learning from losing. It was all perfect. I love my career from every angle. That’s the bitter part. The sweet part is that I know everybody has to do it at one point. Everybody has to leave the game. It’s been a great, great journey. For that, I’m really grateful.” 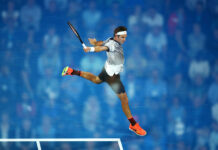