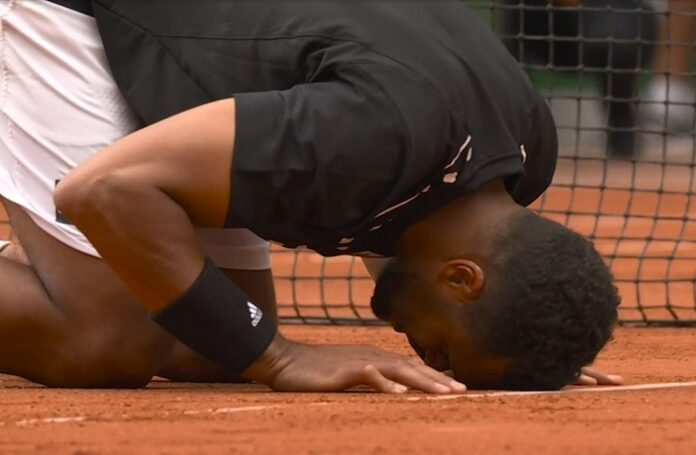 When Andre Agassi retired in 2006, he gave a riveting speech that touched the hearts of many in a packed Arthur Ashe Stadium. It was the most poignant farewell ever by a hero in his home Grand Slam venue. Today, in another vast stadium, the farewell tribute to Jo-Wilfried Tsonga tapped a deep well of emotions. At this problematic time of sorrow, confusion and polarization in our great sport, the French crowd and the tennis family gathered to share something we crave these days – gratitude. Here in Paris tears flowed as freely as burgundy.

After Tsonga’s shoulder gave way, he lost in four sets to the No. 8 seed Casper Ruud. In tears, he bent low to kiss the court. He rose with clay smeared on his forehead. “It’s been an indelible mark he has put on the sport – and now the court has left a mark on him,” noted Markus Buckland. Then came a vast outpouring of appreciation. First, each of Jo’s coaches, wearing “Merci Jo” t-shirts, joined him. Then came a cadre of French players, his parents, his wife and his two adorable children. The Big Four – Murray, Djokovic, Nadal and Federer – offered glowing video tributes.

The man himself said he was happy to fulfill his dream and he hoped the children of the Earth would have that possibility. He offered his thanks, and admitted he was now without his best friend – his racket. Then again, Tsonga’s racket has given so much to so many for so long.

Joi de vivre is one of the great phrases the French language has given us. And over the years few players have shown us more joi de vivre than Jo-Willie Tsonga. He jumped, he smiled – he so delighted in the game he loved. His joy was infectious. The barrel-chested free spirit who inspired hearts said, “The court is where I can express something I have…I was made to play in big matches on the biggest stages.” His victory celebrations, with their high leaps, swirling twirls and ecstatic fist pumps, were rituals that will never be forgotten.

Sadly, today was Tsonga’s swan song. After 18 years on the circuit and troubling recent battles with a calcified back, the 37-year-old French star stepped away amidst high emotion.

His odyssey brings to mind Yannick Noah. The 1983 French champion, whose father was African and whose mother was French, came from the Cameroons to Paris en route to stardom. Tsonga’s father, a handball star, came from the Congo and lived with his wife in the small French village of Sarthe that traces its history to the Roman empire. Like many others in tennis, his son, who has won $22.5 million on court and whose net worth is $10 million, gave us a rags to riches story.

The boy who looked like Muhammad Ali became the man who resembles a young Nelson Mandela. And when he closed his eyes to reflect during changeovers, we envisioned meditative images of Arthur Ashe.

Jo didn’t have the backhand of his fellow Frenchman, Richard Gasquet. His game wasn’t as subtle as Gilles Simon’s and he couldn’t leap quite as high as Gael Monfils. But he was the spiritual leader of France’s Golden Generation, and the leading French player of the Open era.

As the world No. 2 junior, he won the 2003 US Open junior title and then beat Andy Murray and Rafa Nadal on his way to the finals of the 2008 Australian Open. His star was rising, but he’s been called an underachiever. He never broke through to the very top, but he was long in the conversation. He is one of the best players to have never won a Slam. And, for all but one week, from 2008 to 2018, he was in the top 20. He reached five Grand Slam semis and nine quarterfinals and won 18 titles. At the French Open, he twice got to the semis, but has won only one match in the past five years.

He did lead France to the 2017 Davis Cup Championship and won an Olympic doubles silver medal.

Of course, there were some bumps in the road. Margaret Thatcher’s daughter Carol lost her BBC job when she used a racial epithet to refer to Tsonga. And Jo didn’t draw any favor when, after a loss in Shanghai, he said he’d “lost a bit of energy because the ballboys didn’t bring me the towel.”

Far more than this, Jo had three big problems. His backhand was below par. The timing of his career was wretched, and his luck with injuries was worse. He emerged just as the Big Four did.

His record against the them is 18-53. But Jo was upbeat about his fate, saying, “I was fortunate to play with them. It was an honor…They will be the best players ever…Of course it was not easy…In all tournaments, I had to play one in one round, and another one the day after…and maybe another one in the finals! It was difficult…When I won Toronto [in 2014], I beat Andy, Novak and Roger in a row. At the end I was completely sick, completely tired.”

Throughout his career he played with a trademark physicality. He beautifully blasted his way through matches and he had fine touch. But his body (back, shoulder, abdomen, sickle cell disease – you name it) continually interrupted his career. Between January 2020 and this March, calcified ligaments sidelined him. At times he couldn’t even run.

His retirement is part of a trend. While the game’s greatest elders – Serena, Venus and Federer – still hold on, other beloved players, like Juan Martin del Potro, Ash Barty, the Bryan brothers and Carla Suarez Navarro, have stepped aside.

To many, Tsonga was an inspiration. Felix Auger-Aliassime, whose father is from Togo, said ,“I liked his charisma. His game was very explosive, and he was fun to watch. And, also, I can’t deny the fact that since we both have the same background, skin color…I just felt like as a kid, when you have representation on your TV, you feel like you can relate. It really felt like, ‘Oh, this could be me.’…That’s why I idolized him.” Felix said that while “American or European players felt a bit distant…it felt like, ‘Okay, this is for them, this is not attainable for me.’ But seeing Jo…felt like, ‘Okay, maybe we do have a similar story,’…and it felt like he was a big brother.”

In the end Tsonga said he left everything out on the court. “It was pure madness today…The crowd gave me power to fight…I couldn’t have asked for anything better.” To Jo, the best part of his career was “to live this with people.”

When Inside Tennis asked him what, in the end, he ultimately could express on a tennis court, the great Frenchman replied: “In real life it’s sometimes difficult to be intense. You don’t want to shock, you don’t want to be too rude, you don’t want to hurt somebody. You always try to act nice…But on the court you can express everything about you, and it’s freeing.”