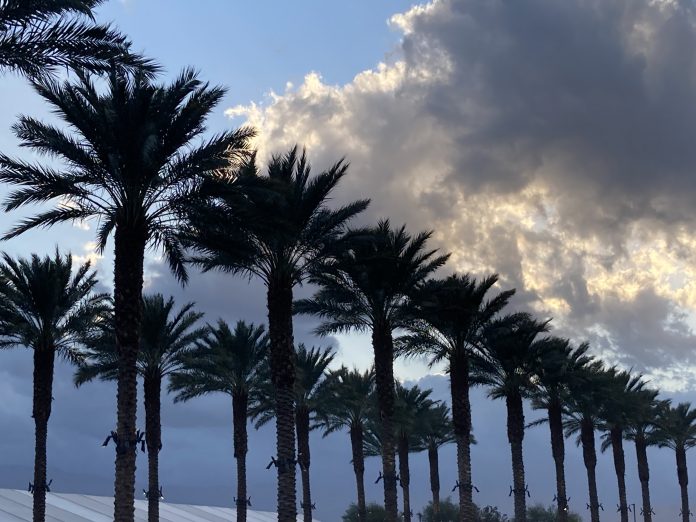 “Storms draw something out of us that calm seas don’t.” – Bill Hybels

Forget the inviting mix of peach and pink that’s the signature of late afternoon skies in America’s gorgeous desert. Fierce gusts transformed the Coachella Valley landscape into a daunting dystopia.

Out on the freeway, an oil tanker flipped over and burst into bright flames. An ominous cloud billowed.

Tennis’ brightest new meteor, Emma Raducanu, had already flamed out without much of a fuss. And many of the usual secondary lights – Simona Halep, Karolina Pliskova and John Isner – were already gone.

Even rising star Andrey Rublev had been taken out by Planet Paul: American Tommy Paul, No. 60, dramatically dismissed the Russian and world No. 5 on an outer court late last night, 7-5 in the third.

Not one of the ATP’s Big Three and neither of Indian Wells’ defending champions – the injured Dominic Thiem and Bianca Andreescu, who fell to Anett Kontaveit – will gain desert glory this year.

This week the tennis turbulence that has been simmering for seasons gathered into a perfect storm, unleashed by absences, upsets and withdrawals. Few would proclaim that a new day has actually arrived – it just seems that way.

The song contends, “It never rains in Southern California,” but it rained here last night. Things are different now. A champion we’ve grown to love, Venus Williams, is now ranked No. 147. Rafa Nadal is dealing with a rare malady, Muller-Weiss syndrome. Roger Federer is hobbling around on crutches at his Swiss villa. And when she’s not making action-packed TV ads, Serena is focusing on mothering her daughter.

Here in the desert, Brazilian lucky loser Beatriz Haddad Maia, No. 115, beat top seed Karolina Pliskova. An English tennis knight with just one real hip, Sir Andy Murray, found his shoes, his wedding ring and his form as he beat the young Spaniard Carlos Alcaraz in 4:28. But then, for the first time in his career, he lost to Alexander Zverev, 6-4, 7-6(5).

All the while fans tracked a cadre of emerging stars: a chess-loving Russian with a shiny new trophy that he won in New York and a 6’ 6” body that moves like an octopus (Daniil Medvedev); a gifted and powerful German Olympic champ hoping that a simmering scandal won’t explode (Alexander Zverev); a fleet Greek whose appealing reputation took a hit New York due to his belief in gamesmanship and his disbelief in vaccines (Stefanos Tsitsipas).

Ultimately, the raging storm cleared the air in the desert. And many a tennis sunset may be ahead of us as storied careers dip below the horizon.

Yes, Nole will probably win more Slams, and Rafa may once again reign at Roland Garros. But the inevitable change we’ve been expecting is a gathering storm of young, vastly talented players who should soon rise and own the stage.

As one of the west’s great cowgirls, Dale Evans, once told us, “If we never had any storms, we couldn’t appreciate the sunshine.”

“This is the first tournament that brought us the shock of COVID, now I’m glad we are all here.” – Coco Gauff

“You guys have been what we have been missing for a couple of years.” – A radiant Shelby Rogers to fans after her third-set tiebreak victory

“Mental health is something that is invisible. I think it is as strong, as powerful as any physical health. Hopefully there will be a lot more tools out there how to cope with this, how to deal with this. Awareness is really, really important.” – Victoria Azarenka

“It seems like I’m calm but sometimes I’m freaking out and I don’t want to let you know or let my opponent know.” – Coco Gauff

“The funny thing is when we went back home to practice the serve [after the US Open] and my dad just said, We’re going to play soccer. We did not hit a serve for, like, three days. We threw the football…[and] that really helped me to calm myself and just have fun.” – Leylah Fernandez

GO FIGURE: After Bianca Andreescu and Karolina Pliskova crashed out of the BNP Paribas Open, local broadcaster Blake Arthur said, “So that’s it for two of the biggest names in the tournament and two names I won’t have to pronounce again.”…Danielle Collins double faulted six times in her first service game against Ons Jabeur….John Isner withdrew from Indian Wells due to the pending birth of his third child.