Today, tennis’ greatest clutch player, its most savvy problem solver, its toughest street-fighting man and its prime philosopher in residence, who for two weeks spoke about how pressure is a privilege, about breathing and staying in the moment, faced his greatest foe: history.

In sports, just as in mountain climbing, you have to summit. If you want a title or a record, you gotta grab it by the throat. You can’t kick that last second field goal wide left, like the Bills. You can’t let a dribbler through your legs, like the Red Sox’s Bill Buckner. And you can’t let your dream slip away, like Jana Novotna at the 1993 Wimbledon. Thirteen times Serena has sought to equal Margaret Court’s record of 24 Slams. The 39-year old may never get there. Both she and Martina Navratilova had chances to win the Grand Slam but faltered.

Today the sinewy Serb was seeking to achieve a triumph like no other. If he won the US Open, he’d surge ahead of Roger and Rafa with their 20 Slams. He hoped to do what no man – not Borg, Connors, McEnroe, Sampras, Agassi, Roger or Rafa – had done what Rod Laver had done 52 years ago.

And with that, Nole would certainly, at least for a while, put a lid on the GOAT debate. Most predicted he’d win. After all, the Serb is a gluten-free, oxygen-tank-loving meditator and master craftsman who has the best return of serve the game has ever seen, one of the more effective backhands in the known tennis universe, a sinewy frame that bends like rubber and an resilient mind that amazes.

More than this, the passionate warrior relishes challenges.

If there’s a record, he wants to smash it. If there are a couple of dreamy heartthrobs on the scene (think Roger and Rafa), he wants a chunk of the love. Nole likes to take it to the doubters and mute the haters.

Oh, well – Novak had dropped the opening set in his last four matches. In other words, we thought, Novak had Medvedev just where he wanted him. But John McEnroe sensed the moment: “Now you see how difficult it is to win Grand Slams. Nerves get in the way – even for a champion.”

Medvedev, a chess fancier who loves movies, was following his own script. Cool under pressure, he served big to his spots, battled at a breakneck pace and held one service game in 47 seconds.

The man who moves like an octopus and whose name means bear took it to the Serbian who loves wolves and won the first set 6-4 in just 36 minutes.

Daniil is the real deal. The slim, 6’ 6” 25-year-old, who had never won a Slam, played strategically. Defending adeptly, the fastest, most agile big player in tennis history patiently waited, then hit out. His second serve was wicked and he absorbed whatever pace the surprisingly flat Serb could generate.

But Nole’s raucous fans didn’t seem to worry. Nole losing the first set almost seemed to be a tactic. Italian Matteo Berrettini had commented that Novak took energy from losing the first set in their quarterfinal. Plus, it’s said that no one navigates a match better than Nole. Mid-course corrections are his thing. Beating him in five sets was said to be the hardest thing to do in tennis.

In the second set, Nole quickly gained three break points. The crowd, who turned Ashe Stadium into the Roman Colosseum, chanted, “Nole! Nole! Nole! Nole!” But his foe played as if he had a plane to catch. At this definitive moment, he kept his mid-career cool and won six points in a row. Djokovic could only flail his arms in frustration.

The towering Russian, who moves like a point guard and is No. 2 in the world, has won more hard-court titles over the past three years than anyone else. He was on a 14-1 victory run and he had two career wins over Novak. His confidence was soaring. He was on the cusp of greatness.

Clearly, Djokovic was feeling more pressure than any tennis player since Billie Jean King at the Battle of the Sexes in 1973. After one key break opportunity vanished, the furious Djokovic pounded his racket four times on the court. One flashed back to when he got booted out of last year’s US Open. The crowd booed for 10 seconds and then, incredibly, switched to hearty cheers.

But Nole just couldn’t break through the Russian’s fortifications. In the fifth game of the second set a Djokovic volley flew far beyond the baseline. His hopes for glory dipped. Ashe Stadium was stunned. Clearly the Russian was stepping up to deny what had seemed to be Novak’s destiny.

Djokovic had lost six sets at the Open and been on court for well over 17 hours. On this humid afternoon there was little evidence of the most efficient craftsman the game has ever seen. The Serb, who’d won seven of the last 12 Slams, is said to be the greatest ever. Novak had said he would put his body, heart, soul and mind into the match, and play as if it were the last match of his career. Time and again at the Open we’d seen his resilience, and he’d told us his quest was all about being in the moment. This “is all about ourselves, and the inner battle.”

But this was a battle he was destined to lose. He muffed a makable pass and lost the second set 6-4. His Russian foe, an on-court chess master, moved in for a checkmate. His pressure was unrelenting. This year Djokovic had won 27 Slam matches, but his 28th match, the one that would give him a 21st Slam and propel him past his two greatest rivals, give tennis its first Grand Slam in 52 years and put an end (for a while) to the GOAT debate, was not to be.

Novak, who is said to first take his foe’s legs and then their souls, was pummeled. Medvedev, who returns from 15 feet behind the baseline, was never really behind today. Yes, there were some late-match dramatics, when Medvedev double-faulted on championship point and Djokovic rallied to score his first break of the match. The Russian bear wobbled – but, on a third championship point, as the crowd howled, he hit a 129 mph serve to score a 6-4, 6-4, 6-4 triumph. The so-called “skinny villain” scored a massive win for the ages and became the first “Next Generation” player to beat one of the Big 3 in a Slam final. 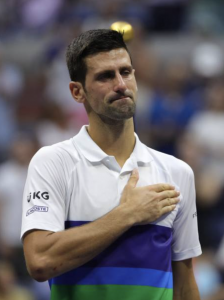 Nole later confided, “I was just below par with my game. My legs were not there. I was trying – I did my best. I made a lot of unforced errors…[and had] no serve, really…I was below par with everything…So just one of these days where unfortunately, it wasn’t meant to be.”

Ironically, sometimes, in tennis, champions like Martina Navratilova, Andy Roddick and Andy Murray gain more love in defeat than in victory. Afterward, Medvedev (like Naomi Osaka in 2018) told the fans he was sorry he won. Then he turned to Novak: “I’ve never said this before…but for me, you are the greatest tennis player in history.”

For his part, Djokovic turned his press conference into a poignant reflection on the impact of sports. The man who finally gained what he most wanted, our love, shared his feelings. “I felt something I never felt in my life here in New York. The crowd made me [feel] very special…The amount of support and energy and love I got was something that I’ll remember forever…That’s the reason on the changeover I just teared up. The emotion, the energy, was so strong. I mean, it’s as strong as winning 21 Grand Slams…They touched my heart.”

The Open was the first time there would be two first time winners, Daniil and Emma Raducanu, since the 2004 French Open. As for the future of tennis, Novak said, “The older guys are still hanging on. We’re still trying to shine the light…But the new generation is…going to take over. I think tennis is in good hands…At the end of the day, that’s what counts, and that’s what keeps our sport alive…Emotionally this has been a very demanding period for me in the last five, six months. Slams and Olympics and playing at home in Belgrade. Everything was…accumulating, all the emotions I’ve been through.”

Nole wept after the match, and described his feelings: “Relief. I was glad it was over because the buildup for this tournament and everything mentally and emotionally I had to deal with…in the last couple of weeks…was a lot to handle.

“I was just glad that finally the run is over. At the same time I felt sadness, disappointment, and also gratitude for the crowd and for that special moment they created.”

Novak Djokovic created a very special year, and today he showed that, even more than the GOAT, he is a very insightful and appreciative human being.