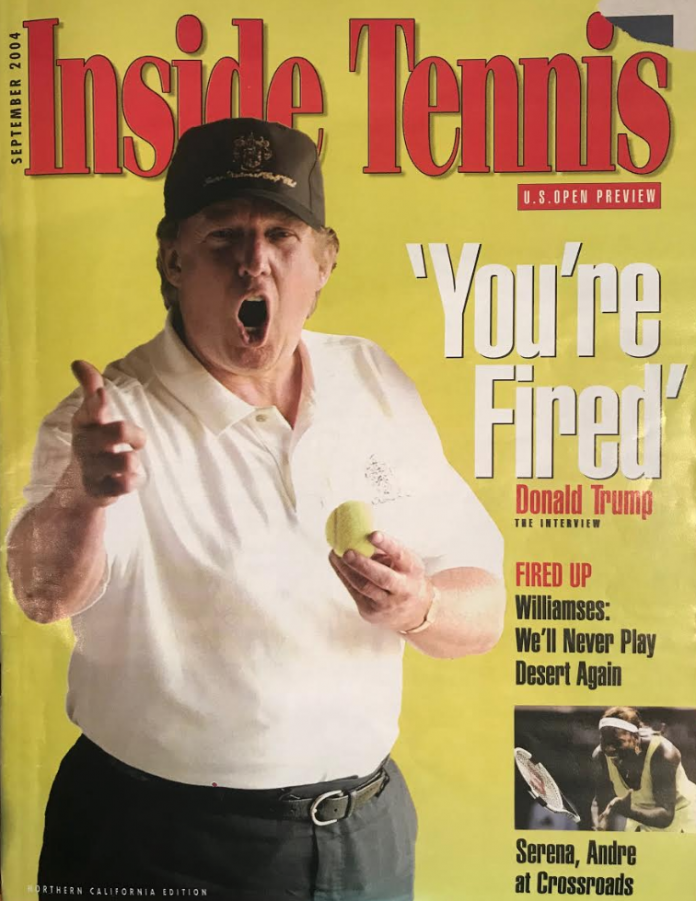 There’s little doubt about it, President Trump draws controversy. And there’s no doubt that publicity is his tonic.

Love him or loathe him, whether on Twitter, on the White House lawn or on stage at a raucous rally, time and again he dominates the daily news cycle like no other figure in American history. And, goodness, if you’re creative, you could claim the President is a small part of the story of the US Open draw. Let us explain.

People love to imagine. That’s why there are weeks of deep-dive speculation before the start of the NFL and baseball seasons. That’s why, in March, basketball fans love to break down their NCAA Championship brackets. Horse racing bettors consider every nuance before putting down their wagers, and tennis aficionados, on the eve of each of the Grand Slams, love to deconstruct every little detail.

When could Roger and Rafa face each other? Who of the Big Three has a cakewalk? Who has to navigate a monster draw? Is there a quarter of death? When will Venus and Serena face each other and where in the draw did the game’s most “dangerous floaters” land?

Sometimes these mind games are as much fun as the matches.

But this year’s US Open is different. Just one storyline developed. The two it girls of modern tennis would meet in the opening round. It’s not Ali vs. Frazier or Roger vs. Rafa, but Serena vs. Sharapova has been the most intriguing WTA match-up of our era. In one corner there will be Masha, the tall, lean Sugarpova-creating icon who has a penchant for long backstrokes, long absences from the tour and little black Audrey Hepburn dresses. Never mind that repeated shoulder surgeries, iffy serves and a drug suspension have set her back. Maria has won more Slams (five) than any other active WTA player not named Williams. But now she’s only ranked No. 87 and is no longer Russia’s No. 1 player. Still, she’s our culture’s foremost Russian-American crossover star, is big in Moscow and Manhattan and reportedly has a net worth of $134 million. That’s nice.

In the other corner is a supermom and a superwoman. This year’s Wimbledon finalist Serena Williams has a penchant for magazine covers, royal weddings and social justice causes ranging from prisoners’ rights to maternal empowerment. Worth $180 million and the winner of 23 Slams, she rocked the house at last year’s final. That tumultuous epic now begs a question. Has a single player (Serena), ever had two back-to-back matches at a single Grand Slam (last year’s final and her upcoming opener vs. Maria) that will draw more attention?

The Serena vs. Sharapova face-off will be an opening-round popcorn match like few others. What other players have such charisma or, for that matter, more sense of entitlement? Their feuds have not been pretty. Just ask Patrick Mouratoglou. Yes, their matchup has far more sizzle than steak. Serena has a commanding 19-3 lead and hasn’t lost an on-court match to Masha since 2004. It’s the most lopsided big rivalry in WTA history.

When they were scheduled to play at last year’s French Open, the Times of London called it “The Epic Grudge Match.” The Telegraph noted that since Serena had beaten Maria 18 straight times their match-up should be dubbed the great tennis unrivalry. Still the world was watching. Reporters flew in from Iceland. But then Serena suffered a pec muscle injury and withdrew.

All the while, their rivalry brings to mind one of the most curious match analyses of all time. Just after the then 17-year-old Sharapova shocked the world with her 2004 Wimbledon final victory over Serena, I did a lengthy interview with Donald Trump at his Los Angeles Country Club.

He conceded, “I didn’t get to watch [the Wimbledon final] because I was at a big business meeting.” But that didn’t stop him from offering quite a commentary. He said, “I’ll tell you, Sharapova to me is very beautiful, her gait is magnificent and those shoulders. You don’t often say, ‘Gee, she has beautiful shoulders,’ but her shoulders are…She’s beautiful. I would say that maybe [Gabriela] Sabatini was the most beautiful.”

He then asked me, “Do you think Sharapova’s beauty had something to do with the misses [by Serena]? Serena is used to going out there and [kicking ass]. She’s also used to looking like the star. Now, all of a sudden, she’s facing this girl who’s a supermodel beauty…Do you think her beauty intimidated Serena? I think she looked across the court and said, ‘I’m playing against a supermodel.’ I think it had an impact…Aura is the whole thing. Perception is an amazing word. If the perception is there, then…But, it doesn’t always work. The perception was that Serena couldn’t be beaten, but she got her ass kicked. So, you never know. You still have to produce the goods, but perception and aura are very important.”