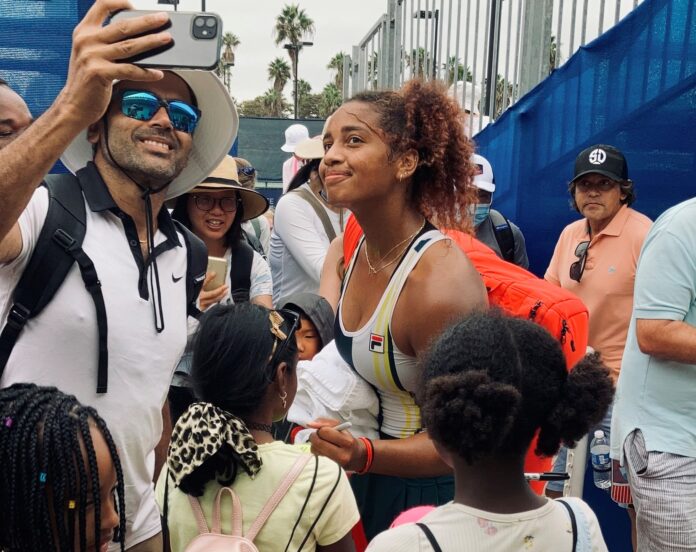 After a period of drought, the WTA Tour made a triumphant return to San Diego with the competition of two rounds of qualifying this weekend. San Diego has a long history of supporting women’s tennis that reaches back to the 1970s and the formation of the Virginia Slims tour by the Original 9. That milestone is the foundation of the modern era WTA tour.

In 2022, the WTA sought new partners when their leadership team made a decision to pull events out of China. The move was prompted by abuse statements voiced by Chinese player, Peng Shuai. Her serious accusations reportedly involved a high-ranking Chinese government official. What followed was a period where she seemed to disappear from public view. Concerns about her welfare grew throughout the tennis community. Despite occasional public imagery, concerns remain.

An important tour partner, Hologic, stepped up supporting the WTA decision. Their sponsorship sent the message, doing the right thing can pay dividends. The WTA had an urgent need to reconstruct the 2022 schedule. With a highly successful ATP Tour event on his resume, Barnes Tennis Center General Manager, Ryan Redondo, was in a prime position to host the tour. Bringing women’s professional tennis back to San Diego in a few short months is a herculean achievement by the Barnes Center team.

The inaugural WTA San Diego Open has an exceptional draw. World No. 1 and three-time Grand Slam champion, Iga Swiatek is the headliner. While Iga is a favorite, US Open semi-finalist Caroline Garcia and quarterfinalist Coco Gauff, Australian Open finalist Danielle Collins and former US Open finalist, Leylah Fernandez will not hand her anything. In August, Garcia found her singles stride winning the Western & Southern Open hardcourt title.

Main draw play begins Monday with the finals taking place Sunday. The 32-singles and 16-doubles draws begin with a bang. Garcia will face a tough first-round opponent in Collins, the former two-time NCAA singles champion. Collins joined the tour following an impressive college career at Virginia. Her feisty character and attacking style of play has earned her a career high ranking of No. 7. Danielle identifies on Instagram as @danimalcollins. Enough said.

Former Wimbledon champion Garbine Muguruza faces reigning Wimbledon champion, Elena Rybakina. With her SW19 win, Elena put Kazakhstan on the tennis map. The winner of this pairing will be rewarded with a second-round match against Swiatek.

Fernandez, comes up against a resurgent Daria Kasatkina. Daria occupies the No. 11 spot in the rankings after several strong 2022 finishes. At Roland Garros, her winning streak ended with a loss to Swiatek in the semifinals. Kasatkina captured attention back in 2018 when she entered the top 10 for the first time as a finalist at the BNP Paribas Open. Since 2020, she has climbed from No. 66 back to the No. 9 spot.

The San Diego event carries additional weight for several players who seek a top-8 finish to qualify for the WTA Finals in Fort Worth. Iga and Ons Jabeur have already secured a spot while Gauff, Garcia, Kasatkina, Jesse Pegula, Veronika Kudermetova and Aryna Sabalenka are in position for a photo finish.

Following a slow start and dropping the first set 6-1 to fellow American, Bernarda Pera, Montgomery found her focus, movement and power. After splitting sets 6-1, 1-6, they battled on with blistering ground strokes. While Pera showed greater shot variety, Montgomery had the answers defending the slice and volley skills of Pera. The third set kept the full stands on their toes as a breaker seemed evident. Despite first serve wobbles, Robin served closing the match, 6-4, in the third set.

The intimate home of Youth Tennis San Diego is a fitting setting for a reunion. The 500-level event has a top-20 singles draw and compelling doubles pairings. As such, thrilling outcomes are in the cards.