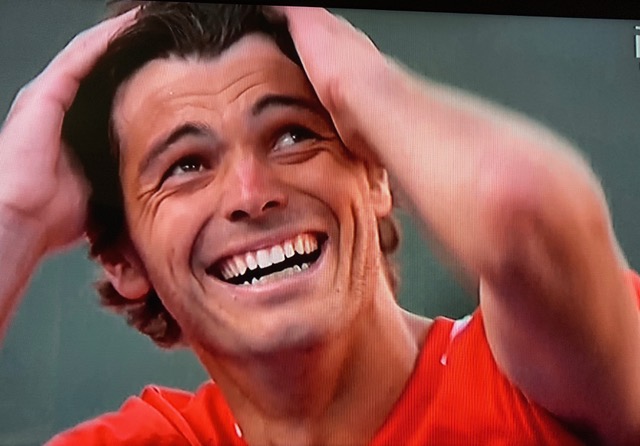 Taylor Fritz is an LA guy. He lives just 36 miles south of Hollywood. In Tinseltown, you “Get script, read script, follow script.” And today the Indian Wells script was clear. Rafa Nadal, the beloved icon with 21 Slams, would get his 21st straight win to claim his record-tying 37th Masters title and fourth title of a truly magical year, right? The man who, over the past three months, had beaten the Russian bear Daniil Medvedev, subdued the 147-mph serves of Reilly Opelka, brushed aside the power and antics of Nick Kyrgios and dismissed a fellow Spaniard bound for glory was likely to prevail today.

Today, Taylor cut his practice short due to the ankle he rolled in the semis. Questions swirled. Would he even play? Would the fact that his ankle was sore take a certain pressure off? Maybe.

He later explained that he’d tweaked his ankle in the semis and didn’t think much of it. Then, on his first push-off in his morning practice, he felt “the worst pain imaginable. I was really upset, basically almost crying because I thought I was going to have to pull out.”

But Fritz is a medical wonder. After a knee procedure last June after the French Open, he returned to play Wimbledon just three weeks later. He told Inside Tennis, “I’m an extremely stubborn person..[and] I have a very high pain tolerance and not a lot of regard for potentially damaging myself worse if I think there’s a chance I can play…I was thinking what I was going to have to say to the crowd if I pulled out.”

Fritz worked with a doctor, got numbed up and his ankle became a non-factor. “I started hitting. I realized, like, ‘Wow, maybe I can actually play.'”

Rafa’s footwork was suspect, his serve was slow. Had yesterday’s epic 3:15 marathon win over Alcaraz in a mean-spirited sandstorm tired the 35-year-old? Was his foot hurting again? Little did we know how painful the chest injury he suffered last night was. He later confided that he felt like there was a needle in his chest – he had trouble breathing. There had been no time to get it checked out. At his academy in Spain there’s a sign that reads, “Excuses never won a match.” Rafa didn’t make any, but he conceded he was not able to compete.

Fritz, who will be No. 13 Monday, did. The No. 1 American, who last year at Indian Wells beat Alexander Zverev and this year downed No. 7 Andrey Rublev in the semis, unleashed 141-mph serves and 93-mph forehands. His underrated backhand, both down the line and cross-court, was a weapon. He attacked Rafa’s second serve and broke out to a stunning 4-0 lead.

“This is strange, but fascinating,” said Jason Goodall. “Taylor couldn’t have dreamed of a better start.” After scoring three breaks of serve, Taylor claimed the first set 6-3.

But Nadal, who has scored a mind-boggling 19 straight wins over Americans since 2017, is the most resilient player on Planet Tennis. After a lengthy medical break, his movement improved and he scored a key second-set break. Here, we sensed, was just the kind of momentum shift we’ve seen Rafa impose so many times this year – are you listening, Daniil Medvedev, Denis Shapovalov, Seb Korda, etc.?

But Taylor, an increasingly confident veteran playing on his home turf, seemed to be reaching new elite levels right before our eyes. He broke back and prevailed on a brilliant tic-tac-toe scramble sequence, saved four breakpoints and blasted a jaw-dropping forehand to go up 3-2.

Rafa again needed medical attention, but continued to battle. “Someday, someday,” Jim Courier suggested, “Rafa will put down his racket. But, until then, let’s savor every moment.”

Up 5-4, Fritz gained a championship point. But Rafa unleashed a brilliant forehand, and the second set went to a tiebreak.

Here the Californian, who was playing just his first Masters final and who had a dispiriting 0-8 record against the Big 3, went down early. But he maintained his belief, he stayed aggressive. Never mind that “Rafa is Rafa” and that the season so far could be called the Year of the Bull. “I just kept trying to self-talk myself, like this is my time, this is my match, I’m going to win it, this is it. There’s no reason why it can’t be me.”

With fire in his belly, the Rancho Santa Fe kid with tennis in his blood gained a second championship point. He blasted a 118-mph serve and a forehand to the corner. Here was the Taylor-made moment of his career. The first American to win a Masters since John Isner in Miami in 2018 prevailed 6-3, 7-6 (5). Fritz was overwhelmed with giddy relief. He grasped his head and patted his heart. He was in shock.

Last September, Daniil Medvedev derailed Novak Djokovic’s effort to gain a 21st Slam. Today, Taylor denied Rafa his 21st straight win. The Southern California stadium shook with delight. After all, these days, American men just don’t win many truly big titles. But the kid with the wavy hair had refused to waver. His dad had once told him he’d win Indian Wells. Taylor didn’t believe he could do it before he actually did. He became the first American to win Indian Wells since 2001, when Andre Agassi prevailed.

At 24, Taylor Fritz is the youngest Indian Wells winner since Novak a decade ago, and the youngest American winner here since Michael Chang.

On this day of sublime California athletic success, reporters spotted Taylor’s tennis-happy mama and papa courtside. And fans might be forgiven if they changed the classic Mamas and Papas lyric to “California dreamin’ on such a sunny day.” Recalling what went through his head just after he won, Taylor laughed, “I kept saying…no f’ing way, no f’ing way, I can’t believe it’s real. I signed the camera…question marks…I couldn’t believe it…This is a childhood dream come true – a wild dream.”