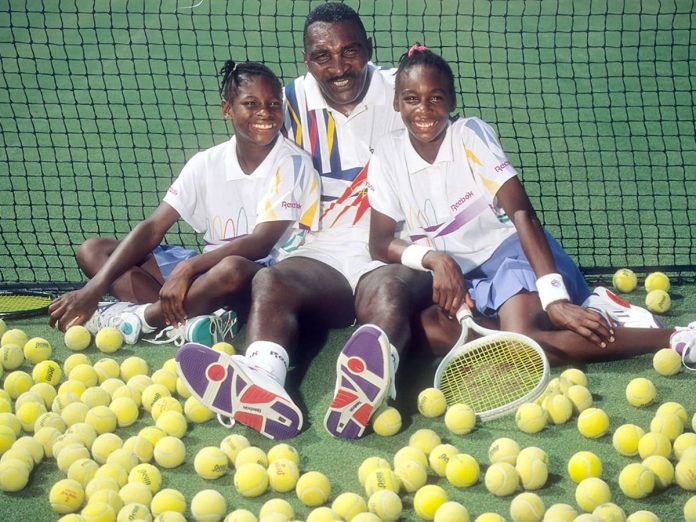 Is it the best story in sports history?

You decide. The upcoming movie “King Richard,” to be released on November 19, tells the rollicking tale of the zaniest, most impactful brainstorm that ever revolutionized a sport.

In 1977, Richard Williams, the son of a sharecropper who was making $52,000 a year, saw Romanian Virginia Ruzici win $40,000 for one week of work at a tournament. Richard had an idea. He told his wife Brandi that they needed to make two babies and turn them into money-making champs. He promptly wrote a 78-page plan for the yet unborn Venus and Serena to learn languages, play music, get all A’s and change the world.

With a glint in his eye and an in-your-face  bravado, Richard fills the screen as a kind of Muhammad Ali in tennis shorts. “I am in the championship-raising business,” he proclaims.

He told his daughters, “This world had no respect for Richard Williams, but they are going to respect you all…[You] are going to shake up this world.” While his five daughters live in one room in a no-frills Compton house, he informs Venus, “Someday someone is going to hand you a check for a million dollars and you can buy as many beds as you want.” Famously, he announces his daughters will be No. 1 and No. 2 in the world.

The third major Hollywood tennis movie in 17 years (the frivolous 2004 film “Wimbledon” was an unforced errors; the 2017 “Battle of the Sexes” inspired) King Richard features the tennis-loving Will Smith along side a brilliant, well-chosen cast, and gives us surprisingly good tennis action and a bucket of insights.

A straight set winner, the film takes us on board Richard’s funky, VW bus as the family sets off on the rollicking, bound-for-glory romp of five girls who giggle, sing, and persevere amidst all the challenges of fierce inner city life and drive-by shootings. Never mind their “crazy-ass neighbor” who calls the cops and social workers on them. Giddy young Venus and Serena buy into their daddy’s singular ambitions as they dare to enter (and dominate) the very competitive, very white and very starchy world of tennis.

As Richard’s not-to-be-messed-with master plan unfolds, we see his inventive teaching methods. They toss footballs and fling rackets over the fence to develop their service motion. The fearless girls, who adore their dad, use threadbare balls and practice on a gritty court, night and day, rain or shine. While local bullies rough Richard up (and then grow to respect the patriarch), the white tennis world has its doubts: Enter our domain at your own risk. You’re off the wall.

The benign broadcaster Bud Collins gently dismisses their chances. Experts scoff at the girls’ ground-breaking open-stance groundies. Tennis sage Vic Braden insists that tennis takes “expert instruction” and that Williams’ dream is a mere fantasy – “like asking someone to believe you have the next two Mozarts in your house. The chance is very unlikely.” Coach Paul Cohen tells Richard, “You are the most stubborn man I’ve ever met. And I coached John McEnroe.”

But tennis begins to see the light. Cohen realizes Venus is “a killing machine” and informs her, “Tennis is a chess match of 228 shots, which you will perfect.”

Then Rick Macci, the coaching whiz who gave us Jennifer Capriati, tells Richard, “You might have the next Michael Jordan on your hands.” “No,” responds bold Richard, “I gots me the next two.”

Watching “King Richard” is like watching fire burn – anything can happen as Venus and Serena set off on their perilous rise. The movie uses their journey to explore issues of race and microagressions, sexism, manhood, greed and family dysfunction, with all its loyalty and love, scrapes and scraps.

When Venus enters the daunting, all-white universe of junior tennis, a few are welcoming. Mostly we see a snarky, fiercely competitive world filled with tightly wound kids who offer side-eye glances, smash their rackets and beat up on themselves. One tells herself, “You’re so stupid, so bad!” And the cadre of smug helicopter parents, some of whom encourage their kids to cheat, are worse.

When Richard ventures into tennis’ leafy havens he’s strong, aware and unsparing. He unleashes a zinger: “We appreciate everyone taking off their hoods before we came here.” But as Venus and Serena begin to relish the affluent ease and free food around them, he bristles: “Nothing’s for free. Someone is paying. You are sitting with your legs crossed at a country club like the Queen of Sheba. Don’t you take anything from anyone for free. Everything in this place has hooks in it.”

The irrepressible genius pushes his hard-serving kids to be the best in the world and get all A’s, but all the while he insists they be normal, thave fun, unshakable belief and self-love.

But, after a year of junior tennis, Richard has had it with the toxicity of the scene. “This junior section,” he contends, “is worse than the ghetto.” Venus goes undefeated in 17 tourneys. Still, he does the unthinkable: he pulls both of his girls out of junior tennis and heads off to Florida.

A sports father like no other, Richard is fierce, fun-loving and full of both provocative ideas and contradictions. He’s endearing, controlling and unflinchingly protective.

When he was a kid, as “whiteboys” battered him, his frightened dad fled. The trauma remains, and Richard tells Venus she soon “will be representing every little black girl on Earth and…I never want to have you look up and see your daddy running away.”

It’s us against the world. So he steps in when an overzealous reporter goes too far in an interview: “You are dealing with a little black kid. Leave that alone.”

All the while his master plan works brilliantly – until it doesn’t. Venus, her coach Rick Macci, and most importantly Richard’s wife Brandi, all rebel. Venus wants to play in the pros, but Richard, who worries about burnout, insists, “Venus is not going to be cracked out in some alley.” But “V” won’t have it. She blasts balls at him. Coach Macci tells Richard, “Screw your frickin’ plan. You don’t know what you’re doing.” Richard is befuddled. He has a mutiny on his hands. “I put this whole thing together. Now everyone seems to know better than me.”

In the film’s poignant, worth-the-price-of-admission scene, the loyal but livid Brandi unloads on the lovable, flawed and vulnerable patriarch. She reminds him that she carried the family’s aspirations inside her and on her back.

“Richard, do you think you did this by yourself?” she asks indignantly. “I worked two shifts so I could put food on your table. That open stance [technique], you got that from me. And I fixed Serena’s serve because you messed that up…I’ve been here dreaming and believing, just like you. You just don’t want to see me…Unlike you, I don’t need the world to tell me I’m great.”

In the heat of battle, Brandi reminds him of past failures – his ill-fated cleaning and cement companies and an earlier family that fell apart.

She barks, “See how you do?…How you walk away when something’s not finished?…Another woman would have left, but I stay…You are the one that leaves. I’m going to stay right here until the job is done…I stay here because of my girls. I stay here because I answer to something higher than Richard Williams. Because if I was staying here for you, I would have been gone a long time ago.”

On the ropes, Richard jabs back, “Where would you be without me?” Brandi replies, “That’s your ego and your bragging…You’re just scared you will fail – that the world will look at you and see another dumb n—er. And you know what? You think they might be right. I’ve never, never thought that about you.

“You’ve done your job…But this is Venus’ life. You gotta let her decide. Because if you don’t trust her to do that, she’s gonna be the one leaving you.”

In this moment of reckoning, Richard understands and relents. The uplifting Hollywood soundtrack rises as the bold but nervous Venus gathers herself for her big moment. On the eve of a pro debut like no other in tennis history, she has the guts to reject a “take-it-or-leave-it” $3 million Nike offer from a pushy, obnoxious executive. Soon after she’d sign with Reebok for $12 million.

Williams, reported one writer, “stands 6 feet 1. Though she’s built like a spider, she runs like a deer.” But Venus doesn’t freeze in the spotlight – she embraces it. Never mind that no other 14-year-old athlete had been under such pressure. At her debut, Inside Tennis reported that “Calculating agents, suspicious peers and cynical journalists” were all on hand. Truth be told, much of the world had come to Oakland to see her fail. But, chest out, power walk in place, Williams bravely proved that all the hype was real. Gleeful fans soon chanted “Venus! Venus! Venus!”

“King Richard” does suffer some inconsequential unforced errors. There are curious product placements, and Venus’ Oakland debut is depicted at an outdoor venue lined by palm trees rather than at a gritty indoor arena.

The film, directed by Reinaldo Marcus Green, which features Saniyya Sidney as Venus, Aunjanue Ellis as Brandi, and Demi Singleton as Serena, brilliantly takes us up to Venus’ 1994 a-star-is-born emergence. But we don’t see that much of Serena (that’s another movie). What we do see is an only-in-America saga of a stunningly audacious risk-taker, a gifted visionary with a brainstorm and determination who rose above racism and confining definitions of manhood to pull off the most outlandish game plan sports has ever seen.

In doing so, Williams gave us two powerful women heroes who transformed tennis, inspired millions and re-shaped our world. No wonder that, to this day, the imperfect but fun-loving and so spectacularly successful King Richard still wears a crown that shines so bright.