In 2018 a little known American, Sofia Kenin, powered through the draw at the Berkeley Tennis Club Challenge and used her success as a springboard to stardom, winning the Australian Open just over 18 months later. Now the tourney is in its third year, and has continued to draw world class tennis to a historic facility, the Berkeley Tennis Club. 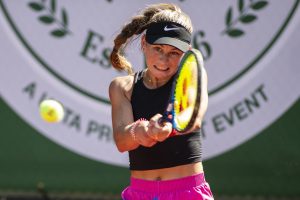 This year five of the top six seeds fell in the first round, including Walnut Creek’s Katie Volynets, 2017 NCAA doubles champ Francesca Di Lorenzo and top seed, China’s Zheng Saisai. Argentinian native Usue Maitane Arconada, who lives in Puerto Rico and plays for the US, went on a stunning run, scoring  upsets over Sascha Vickory, No. 8 seed Liang En-shuo and No. 7 seed Mayo Hibi to reach the finals. Arconada, 22, who won the Wimbledon girl’s doubles title with Thousand Oaks’ Claire Liu in 2016, showed her deft touch from all parts of the court as she faced off against Mexico’s Marcela Zacarias.

Zacarias, the far more experienced player with 16 ITF titles, also had to battle in the Berkeley heat to reach the final. In the opening round, she downed Katie Volynets in three sets, and followed up with a win over 16-year-old wildcard Reese Brantmeier. The up-and-comer from Wisconsin pushed Zacarias and took the opening set, but the savvy veteran steadied to advance in three. In the semis she dropped the first set to No. 4 seed Kurumi Nara, but, up 3-0 in the second, her Japanese opponent retired. 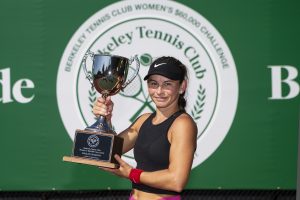 In the final on Sunday, a crowd gathered at the historic Berkeley venue. Arconada survived a flurry of breakpoints to open the match and used her momentum to break early and often, taking the first set 6-1. In the second set, Zacarias won a marathon service game to hold for one-all, but the younger Arconada soon broke and used her serve and groundstrokes to dictate play. Zacarias kept the battle close, nailing her backhand down the line to surprise the agile Arconada, and put the match back on serve. But the Argentine remained steely, broke right back and won 6-1, 6-3.

‘King Richard’ – The Man Who Revolutionized Sports. Our Movie Review

Tennis Camp to Help Kids Get into College