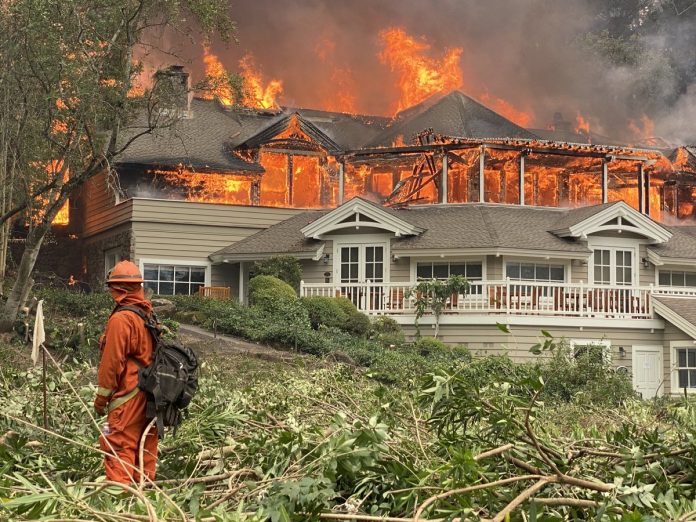 I always laughed. In the brassy London neighborhood of Southfields, not far from serene Wimbledon, the liquor shop always has a big sign that brags loud: “Napa Valley Wines Here.”

“How great is that?” I chuckle. “I’ve come 5,345 miles to see the wonders of Northern California celebrated.” Then again, everyone in the Bay Area knows how special it is to head north to the wine country. And if you go to the very north of Napa Valley, if you’re lucky enough, you can delight in a sweet slice of tennis heaven.

Tucked into its own otherworldly canyon is the verdant Meadowood Club that for years has been a unique getaway for locals, travelers and celebrities from around the globe.

Monday, one of the truly special places in the tennis world was flattened by a fierce wildfire that reduced its renowned restaurant and tennis club to ashes. “It’s almost biblical that this has happened after 36 years. I was going to retire in November,” said the shaken longtime teaching pro Doug King. “It’s a little bit spooky – I don’t want to read too much into it, but it’s something to ponder.”

King was married there in 1979. In 1984, just as he was hired, Meadowood’s original clubhouse burned down. Later, his son Jeff was also wed there.

King sighed, “It’s been an epic saga of such intensity. First there was the original fire in 1984, there was another one in 2017 and we had to shut down. Then we’ve had power outages, the pandemic and now this wildfire. It’s a time for grieving.”

To Doug, tennis, with its movement and grace, connects us with nature, and tennis courts and buildings that are sacred. “These are places where people played and socialized. Their sweat poured into these courts. Kids grew up here. Tennis and movement are experiences of the physical world and part of our human connection with nature. It’s a celebration of humanity. Here tennis gave us a kind of intimacy that connects us to nature, as well as the wine culture. Fawns often came down to my court. They’d play and tease me and try and get me to run after them.”

You could feel King’s sorrow. He sighed, “For me, there’s now no looking forward – there’s only looking back. It’s hit me, how irreplaceable these buildings are. It involves the history of people.”

Once I called King. “Hello, is Doug there?” I asked. “No,” came the reply. “He’s out giving Bob a lesson.” Early the next day I drove up to interview the singular Sundance Kid. But Robert Redford was just one of many celebs who loved the place: think Nicole Kidman, Will Ferrell and Keith Urban.

In many ways Meadowood was an escape valve for a too-urban world. Who knows if this haven will ever be rebuilt? But for now, King put the loss in perspective: “This fits into what we’ve been facing with the pandemic and the whole global scene. There’s a deep impact and a deep sense of loss. Our whole world is being tested.”

AMERICANS IN PARIS: For decades the French Open has been a bit of a nightmare for US men. Creative commentaries on Yankee woes in France are a tradition among American writers. Back in 1989, Jim Sarni noted, “The last time an American man won the French Open Napoleon was the emperor– or maybe it just seems that way. Elvis hadn’t cut his first record, McDonald’s hadn’t cooked its first burger, and Brigitte Bardot hadn’t broken her first heart.” Years later when the US was mired in the Iraq war, critic Bill Scheck asked, “Is it just me, or does it seem that the only place from which the US has an effective exit strategy is Roland Garros?” But this year, the most American men have gotten to the second round in Paris since 1996.

CUCKOO FOR KIKI: Things can’t get too much more bizarre for Kiki Mladenovic. Early on at the US Open the Frenchwoman had match points, but faltered. Then, along with her partner Timea Babos, she was forced out of the Open doubles competition due to possible COVID exposure, even though the No. 1 seeds were the strong favorites to win. She had to stay and quarantine in New York until nearly the end of the Open. She complained that the players were being treated like prisoners and criminals. Today she was up 5-1 against Laura Siegemund and seemed to have won the set, when her German foe got to one of her shots on its second bounce. But the ump didn’t notice. Mladenovic lost her focus and Siegemund roared back to score a win. How cuckoo can Kiki’s world get?

A CELEBRATION OF THE FAMILY OF MAN: One of the greatest aspects of tennis is its inspiring internationalism. It’s a celebration of the family of man. Today on center court, we saw Mikael Ymer, whose parents both left Ethiopia and eventually settled in Sweden, where they met and married. And there are so many others with similar stories. Andre Agassi’s dad left Tehran and met his wife in Chicago. Diego Schwartzman’s great-grandparents escaped war and terror in Poland and the Soviet Union and ended up in Argentina. Naomi Osaka’s Haitian father and Japanese mother met in Japan before moving to New York and then Florida. Canada’s Felix Aliassime-Auger has parents from Togo and Canada, and Stefanos Tsitsipas’ mother is from Russia and his father is Greek.

ANOTHER GREAT DANE? We figured that with the retirement of the popular Caroline Wozniacki it would mean the end of Danish tennis prominence for many seasons. But think again. We also thought that surging US Open semifinalist Jennifer Brady had a sweet draw. Surely the powerful UCLA product, who’d dismissed three-time Slam champ Angie Kerber, would brush aside a qualifier. The little-known Danish teen Clara Tauson is just 17. She had superb results in the juniors. And while her tour resume is weak, her imposing groundies are strong.

Amazingly, she often pushed Brady around the court. Never mind that it was Tauson’s first ever main-draw Grand Slam match and that Brady has one of the biggest games in the WTA. Unafraid and aggressive, the kid moved the American from corner to corner and then, to add insult to injury, hit devilish dropshots that left Brady in the Roland Garros dust.

Broadcaster Alex Faust was stunned: “I just cannot believe the play from this kid. You have to give full credit to the youngster. She answered the bell. This a match of her lifetime.” Tauson’s “A Star is Born” breakout performance left Brady nursing her wounds and reflecting on tennis’ whiplash realities. Earlier this year, Jen scored a stunning upset in an Australian warmup tournament over local hero Ash Barty, the No. 1 player in the world. Then she lost in the first round of the Aussie Open. She bounced back to win in Kentucky in the first US WTA tourney of the post-COVID era, but lost in the first round of the Western and Southern Open before her magical run to the US Open semis.

As for Tauson, the latest great Dane in the WTA will next face another American collegian, Danielle Collins, who, like Brady, has found great success at the NCAA championships.

BACK IN THE FRENCH SADDLE: After tough losses to Elise Mertens in the fourth round of the US Open and to Victoria Azarenka at the Italian Open, where she lost 6-0, 6-0, Sofia Kenin rebounded with a 6-4, 3-6, 6-4 win over Russian Ludmilla Samsonova. BTW: After Ted Robinson noted that the Russian grew up north of the Arctic Circle, Jim Courier quipped, “So she’s comfortable playing in these chilly conditions.”

KNOWLES KNOWS: The former UCLA and ATP player Mark Knowles is a superb student of human nature. When reflecting on the character of Jen Brady today, the Tennis Channel broadcaster noted (without a hint of prejudice), “It makes Jen even a better person because she went to UCLA.”

MALIBU’S EGYPTIAN WAVE HITS PARIS: So what’s the best connection between the tennis happy colony of Malibu and Roland Garros, some 5661 miles away? Is it that Trey Waltke, the Director of Tennis at the Malibu Racket Club, reached the second round of Roland Garros three times? Or does it relate to Malibu’s most famous tennis fan, Johnny Carson? One night, out of the blue, the TV icon unleashed a fierce critique of a French Open broadcaster who was having fun with the pronunciations of the challenging names that are part and parcel of pro tennis. Now, by odd coincidence, John McEnroe reportedly will be covering the French Open on TV from his beachfront home in Malibu.

But Malibu’s real connection with this year’s Roland Garros is the amazing debut of Mayar Sherif. The 2018 Pepperdine graduate, thanks in part due to a win over Caty McNally in the qualies, became the first Egyptian to reach the main draw of the French Open. Of course, her ancient and fascinating homeland has given us so many wonders: great museums, fabled libraries, the Pyramids, the Sphinx and the Nile. But sadly, since the days of Ismail El Safei, the nation of 98 million has been a bit of a tennis underperformer. Some even claim it has better tennis journalists than tennis players. Of course, Egyptologists know well that one of their great gods is a red-haired beast named Set. So appropriately enough, Mayer won the first Grand Slam set she played. But today Sherif faced a fast-shooting tennis sheriff, the No. 2 seed Karolina Pliskova, Eventually Mayer, who’s called Egypt’s Golden Star, faded, falling 7-6, 2-6, 4-6. But she played well and did her great nation proud.

OSTAPENKO BREAKTHROUGH: Latvian Jelena Ostapenko can point to one of the great clusters of wins in French Open history. In 2017 she won seven Roland Garros matches in a row to capture the title. But until today, in four efforts, she hadn’t won a single other French Open match. Good news: that streak is now a thing of the past. She beat Madison Brengle in her opening match today. In contrast, Venus Williams has won 48 French Open matches but has yet to win a single Paris title.