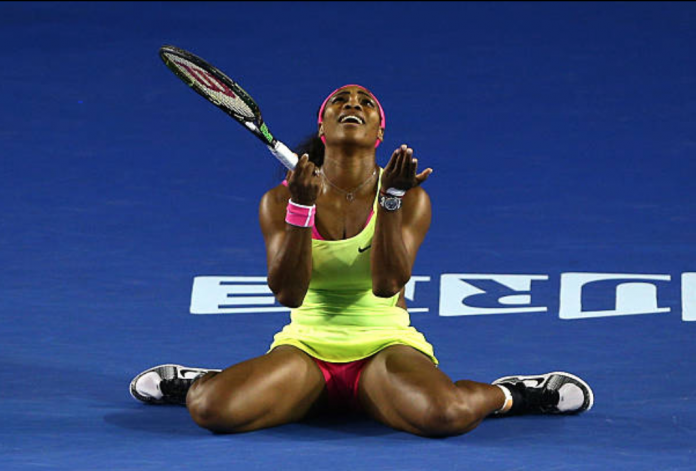 To many, sports are a refuge, a carefree diversion from the everyday heartaches we all suffer. “Keep our games pure,” many say. “Keep politics away.” It’s a powerful point. Others have different thoughts. Here are some.

“The day I stop fighting for justice for people who look like me and you will be the day I’m in my grave.” – Serena Williams

“Start where you are. Use what you have. Do what you can.” – Arthur Ashe

“We wanted to do a small gesture to spread awareness about the unjust deaths of many African-Americans…This is definitely bigger than tennis and we all need to use our platforms to come together regardless of class, gender, race, ethnicity or any other categories. Today, we put our rackets down and our hands up.” – Francis Tiafoe and Anna Broomfield on Instagram on June 1, 2020

“We’re all made different. We all have different looks. And if you really look at it, everybody’s beautiful. One size don’t fit all.” – Serena’s mother Oracene Price

“We had so many black people in this country go to war and get killed [or] go to slavery…We was brought up giving you our labor [and] picking your cotton. We went through the back door…whereas you could send your kids to college while we [had to] go work in the cotton field. If a person done all that for me, I would say, ‘You deserve a little bit. I’m not going to give you much, but you deserve something.’ This is a crazy goddamn world.” – Richard Williams

“Unless something within the realm of the supernatural occurs, Miss Gibson will not be permitted to play…[but] if tennis is a game for ladies and gentlemen, it’s also time we acted a little more like gentlepeople and less like sanctimonious hypocrites…If she is refused…then there will be an ineradicable mark against our game…and I would be bitterly disappointed…Miss Gibson is a fellow human being to whom equal privileges ought to be extended.” – Alice Marble in 1950 calling on the USTA to allow Althea Gibson to play at Forest Hills

“I like watching black women do cool stuff on TV…I can already hear the All Tennis Players Matter crowd complaining that I shouldn’t be so caught up on race….But I unabashedly root for representation and role models…I like seeing Venus, her hair natural, like mine, thick and bundled under her brightly-colored visor.” – Candice Bucker

“Imagine screaming into a void your whole life without anyone hearing you. Imagine living in fear of institutions built to ‘protect’ you. If we’d let Kaepernick kneel – and listened and acted, we wouldn’t be here now.” – Nicole Gibbs on May 31, 2020

“When I was a boy, they called me ‘boy,’ ‘nigger,’ ‘Negro,’ then I became a ‘black man,’ then ‘Afro.’…This country has already done major league damage to our people for 400 years. The question we should ask is if the black people in America are Americans – we’re certainly not treated like Americans.” – Richard Williams

“Wow. Just wow. Shameful. What will it take?” – Serena after 2014 the turmoil in Ferguson

“Ignorance grows like a demon weed on a country club lawn, forever breaching the emerald surface, because nobody treats the root…cosmetic efforts do nothing to keep human beings from being as narrow as a foot-fault foul.” – Writer Ian O’Connor

“Richmond is checkered with stone tributes to the Lost Cause. At a time when this country is at a crossroads, this will become an intersection where the sordid, sinful and divisive past meets an inclusive, hopeful vision for the future [in the form of the statue of Arthur Ashe]. Symbolically, it asks the question: Which way are we going? Which way, Richmond? Which way, America?” – Kurt Streeter

“You’ve got this sport that used to be so lily-white and you have two African-American women playing for the title in Arthur Ashe Stadium, and the stadium next door is Louis Armstrong Stadium. That says it all. Arthur Ashe is smiling.” – former 60 Minutes correspondent Ed Bradley

“Arthur Ashe was the most courageous man I ever knew…He used dignity and restraint as weapons against opponents, whether childish tennis players or the cruel purveyors of racism, and he became a conscience for a nation.” – Charlie Pasarell

“Today I asked my [black] 18-year-old nephew…to drive me to my meetings…In the distance I saw a cop…Then I remembered that horrible video of the woman in the car when a cop shot her boyfriend…I am a total believer that not ‘everyone’ is bad. It is just the ones that are ignorant, afraid, uneducated, and insensitive that [are] affecting millions…Why did I have to think about this in 2016? Have we not gone through enough…? But I realized we must stride on – for it’s not how far we have come but how much further we still have to go. I then wondered have I spoken up?…As Dr. Martin Luther King said, ‘There comes a time when silence is betrayal.’” – Serena Williams

“We’re not in a post-racial society…We need to shine a light on the system as a whole…There’s always inequality everywhere; there’s always someone looking to dominate…Hopefully, at some point…we’ll all just want to be equal. But we’ve got a long way to go.” – James Blake

“We have to advance relationships and build bridges. If we don’t, who will? We have to mature and be as inclusive as possible…We want tennis to look like America…It’s about getting together…Let’s embrace the ABC’s. A is for access, B is boldness, C is collaboration.” – Former USTA President Katrina Adams

“I’m from the south side of Chicago and Sloane [Stephens] spent some time there…That attitude, that environment has an effect – toughness, perseverance, hard work, humility.” – Kamau Murray

“I’m absolutely thrilled that the crowd could put race to one side and get behind a black man like this. I just hope it spreads to other things outside sports.” – Nigerian Nduka Odizor at Wimbledon

“Tennis was dead before we came along. I went to God and said, ‘Give me something I can give back.’ And he said, ‘Brother Richard, give tennis back.’ That’s a joke, but it’s true. We brought tennis alive.” – Richard Williams

“I thought this was supposed to be an inclusive gentlemen’s sport.” – Donald Young, reacting to a reportedly racial incident on court in Florida

“It’s important to spread the message of equality…We really want to speak up about things that we believe in…It’s a concern for everyone…We want to move forward and have the opportunity to have equal rights for all…It’s always great to raise awareness.” – Serena to IT

“Ashe suffered many defeats…Yet he was undefeated in the realms that mattered most – heart, soul, integrity, and character.” – Ray Arsenault

“Arthur Ashe was an absolutely transforming figure and to name the US Open stadium after him is one of the very best decisions by anyone in sports.” –  Rudy Giuliani