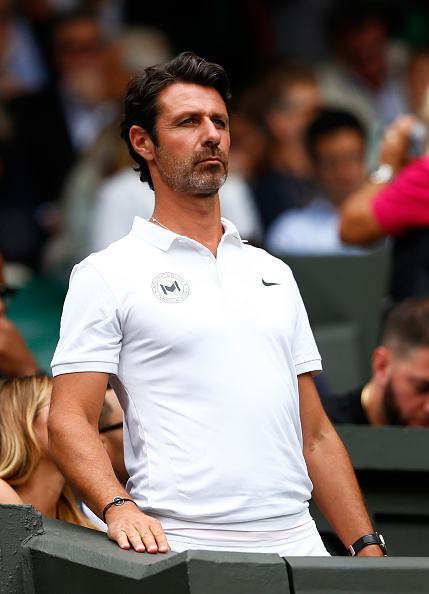 LONDON—After Serena Williams‘s Wimbledon victory, Inside Tennis editor Bill Simons went to the Friends Box on Centre Court. There was Venus Williams, who had stayed on in London to support her little sister. There was the war-weary Oracene Price, Serena’s mother, who has seen it all. Vogue editor Anna Wintour told IT what she likes best about Serena is “that she never gives up.” And there was Serena’s transformative partner Patrick Mouratoglou. The French coach and American writer walked down the stairs of section P, and soon were joined by other journalists who wanted to hear the thoughts of Serena’s friend and mentor.

What impresses you most about Serena Williams?

She never gives up.

What are you feeling in your heart?

I am very, very proud of her. What she has been doing is really, really incredible. I mean, I knew she was unique, but she shows it every day by doing these types of things.

It was difficult today. Pressure-wise she could not always use it.

What did you think when she was having those troubles with her serve?

I think she was just nervous. Because when she relaxed she started serving much better … She was tossing [the ball] much too low, so she couldn’t hit first serves in, and then she wanted to do too much on the second, so she started to miss. It was the pressure of the match that made her miss.

The Serena Slam is such an incredible achievement. You said that the records are a way to assess how you are doing. What does it mean to win the Serena Slam, four consecutive majors?

To win four majors in a row is so difficult, even though when she is playing good she is always a level above all the other players—everybody agrees on that. You have to be able to maintain consistency during all of a Grand Slam, every single match. Because all the girls play her so hard every time, she has to dig deep.

In Australia she was sick, in Roland Garros she was sick, and here she had [an] incredibly difficult draw. She had to beat three former Grand Slam Champions, including [Vika] Azarenka, who played such a great match. So, all these show how even if you are dominant, you have to overcome a lot of things in a row. It says a lot about where she is mentally.

And when she tastes defeat, how does she respond? When she is down and battling. How does she turn it around?

She refuses defeat, she refuses to lose. When she feels the taste of losing, she finds so much strength, and she can raise her level.

She thought about winning [near the end of the final], then she lost her rhythm completely. This can happen, and it has happened to Serena because she is human. But she always bounces back. Always.

And she will feel such pressure now [aiming for the Grand Slam and 22 Slams total in New York]. How will you tell her to deal with all the focus that is going to be on her?

She had such delight when she finally let it out: ‘I won the Serena Slam, I won Wimbledon.’ Did you get a kick out of that, Patrick? Did you like it?

Yes, of course. You are so relieved, even though you know she can do it. I mean every time she starts a Slam I know she can win it. I know there is a big difference being able to win it and winning it. You feel relieved.

Talk about your 8 Slams with Serena.

I think it’s a combination of factors. Obviously there is a great trust between us. We are simply doing a good job. We are working on the right things. We are focused. That’s it.

Is she enjoying this moment, or is she already thinking about the US Open?

I mean we are playing next week, so….

I don’t think she wants to stop. I will be surprised if she stops. She loves being number one, she loves winning Slams. As long as she feels she can win, I think she will.

Yes, tennis changes. If you look at the [average] age of the top 100, it’s maybe 3 or 4 years older than it used to be. The surfaces are slower, and it takes much more time to develop because you need to be incredibly physically fit—you have to cover the court so well, you have to stay in longer rallies, otherwise you are in trouble. To do what Boris Becker did when he was seventeen-and-a-half—I mean, I don’t wanna say it’s not possible, because you never know, but it’s very difficult now with the type of surfaces we have on tour. But what I also like about Serena and Roger [Federer] is that they show you can still be on the top by playing a super aggressive game.

I think she [Garbine Muguruza] will win Grand Slams, She was very nervous today. She didn’t play her best tennis, but she has a big game—the game of the future. A big serve, aggressive returns, taking the ball on the rise, going forward. That’s the game to win Grand Slams.

When is the future? We have been in the present with Serena for a long time now.

I hope as late as possible, because Serena is gonna try to prevent these young ones from winning Grand Slams.

Thanks to IT contributor Lucia Hoffman for assistance.