Modern Tennis was first played on grand British estates in the empowering (or should we say smothering) world of Victorian virtues, an oh-so-proper universe with few hints of sexuality and a  culture which would make Downton Abbey seem like an anarchist free-fall.

For decades only a few dared to challenge the “don’t rock the boat” mindset. The French diva Suzanne Lenglen revealed her ankles and  kept a Queen waiting. Berkeley’s Helen Jacobs wore shorts, and Brit Fred  Perry came from the wrong side of the tracks. And then there was the  accidental revolutionary – Gertrude “Gussy” Moran.
***
In the late 1940s a long winter of war and depression at last began to recede as the Greatest Generation prepped for the pleasures of bright plastics and suburban ease. And in L.A., a movie technician’s daughter who had worked in a war factory pulling bolts for $40 a week yearned to emerge.
Gussy Moran was different. 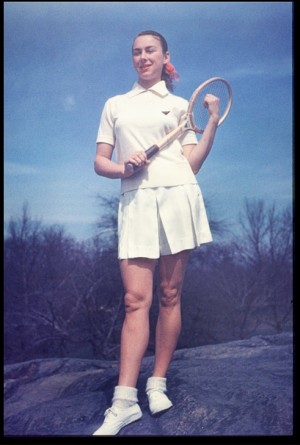 She liked to go barefoot, didn’t wear make up, slept in T-shirts and  was said to “enjoy being attractive and the excitement she  gave to men.” A tennis whiz with a hefty forehand, she trained with the legendary Bill Tilden, played over at Charlie Chaplin’s place, had Sunday hits with Greta  Garbo and Olivia de Havilland and won the National Indoors singles, doubles and mixed doubles. But she was “only” No. 4 in America and, when she finally went to Wimbledon,  she wanted to stand out and look feminine.

So she asked the iconic Wimbledon host and dress designer Ted Tinling to create her a dress with  color. Tinling responded, “Have you lost your mind?” After all, when he had previously created a dress with just a hint of color, he was greeted with  a storm of ‘tude. “We DO play tennis in white, DON’T we,” huffed Hazel Wightman.   But Tinling was a determined rebel-in-waiting. After all, he “felt that in looking like modern-day Amazons, the sports girls were reneging on their birthright.”  And Gussy, such a sympathetic soul, was his ticket.  “The late '40s,” Tinling wrote, “were the Lana Turner era, when curvaceous figures were emphasized. Gussy epitomized this with her provocative, sexy bodyline and a walk that had so much bounce … [Plus] her skin had a lustrous California gleam. I thought of her as a person  who actually shimmered.”
But Wimbledon didn’t exactly do shimmer.  Sure, over in Paris, Dior was creating waves with its New Look innovations, but starchy old Wimbledon was still stuck with its wartime  unie look and obligatory kilt-length skirts. Yawn.
But Tinling was eager to speak his incendiary fashion truth to the powers that be. So, with both glee and trepidation, he created a stunning short dress trimmed with satin that bared Moran’s considerable 25-year-old knees and, (here was his touch of genius,) adorned Gussy’s panties with a mere two inch strip of lace.

In a flash, Gorgeous Gussy Moran morphed into  an international sex symbol.  Photographers flocked to her court and fell to their bellies to get  provocative shots. Two hundred writers rushed to Wimbledon. For five  days Gorgeous Gussy was the front-page story. She was Life Magazine’s  picture of the week and the New York Times announced that her tale was Wimbledon’s lead story.

But many were shocked that Gussy would “draw attention to the sexual  area.” Officials bristled. Ministers offered cautionary sermons from their pulpits. Without  anything better to do, the British Parliament debated the issue. Always  eager to stir the milkshake, Tinling claimed that, “The sooner all the  lads are sun-tanned from the blaze of [Gussy’s] tropic eyes the happier we  will be.”  But The All-England Lawn Tennis and Croquet Club was not happy. They asked Tinling, “How could you  do such a tasteless thing having been with us for so long? You put sin and  vulgarity into tennis.”  Step aside Bonnie and Clyde, here were Gussie and Ted.

Still, Moran had her backers. Princess Marina, Wimbledon’s Honorary President, chuckled, “Panties are great fun.” French papers announced,  “British Puritanism went too far at Wimbledon.” Italians bemoaned “the subversive force of English tradition,” and America’s Women’s Wear Daily  giggled, saying, “Wimbledon Outlaws Galloping Godivas.”  But Wimbledon was not laughing. They announced that they didn’t need panties to maintain their popularity and claimed that Gussy’s dress was “designed to keep everybody’s eyes off the ball.”   Beyond this, they launched a Cold War and gave Tinling the silent treatment and then cruelly banished him for 33 years. The U.S. Lawn Tennis Association quickly outlawed lace and  plunging necklines, and Wimbledon officially forbade short dresses and mandated all-whites. Moran countered, “If they want only one color, why  don’t they choose black? This would be appropriate mourning for the game  they are trying to kill.”
All the while, Gussy relished in her notoriety. She signed a $75,000 contract with Bobby Riggs' pro tour. The Marx brothers invited her to join their act. She had press conferences, did cheesecake photo shoots dolled up in Dodger and Yankee uniforms, made appearances at department stores, was voted the “Best Dressed Sports Woman of  the Year” and had a cameo in a Katherine Hepburn movie. They even named a racehorse, an aircraft  and a secret sauce after her. It was said that “she could shovel snow at Forest Hills and still draw a crowd.”  “Publicity just follows me,” she gushed.

But beneath the surface there was an uneasy angst.
It’s a major stretch to say that Gussy was tennis‘ answer to Marilyn Monroe. But Moran was sensitive and self conscious, and far more inclined to be a  recluse than a gushing starlet. Like Marilyn, she both embraced the intoxicating elixir of fame and then was repelled by its tyrannical grip.  So Gussy would hold her racket in front of her face when she went on court to prevent photographers from taking her picture. When she encountered a  critic in an airport, she barked, “If you still want masculinity, you can have it” and then she promptly cut off one of her pigtails. Once, when she sensed that strangers didn’t think she was that pretty, she asked “What do they expect, a goddess or something?”  Even in 1970, when on a goodwill trip in Vietnam, a broadcaster spoke of her outfit, she plaintively asked Tinling, “How long can this go on? The  panties went yellow twenty years ago.”
What was colorful was her social life. She showed up in black shorts at traditional Cairo clubs and both snubbed and slept with Egypt’s King Farouk, had a union with a dashing British Army officer in India and a mathematics Phd with mob ties and a penchant for blackjack. She spoke of being beaten up and raped backstage at a Lawrence Welk Concert. She was childless, and none of her three marriages lasted more then two years.  Plus, her professional life was a mess.

She bounced from job to job as a TV and radio broadcaster, PR maven and a tennis writer, designer, hostess and coach, before she worked at a souvenir store at the L.A. zoo. Not surprisingly, like many a pioneer of women’s tennis – Althea Gibson, Alice Marble and Helen Wills Moody – late in her life she endured a long dreary and very solitary downward arc.  In ’86, unable to pay her taxes, she was evicted from her family’s $1 million ocean view Victorian home in Santa Monica and was relegated to a string of increasingly tiny, run-down  Hollywood apartments where sheets served as curtains and where she tended upwards of 25 cats.  Her friend, teaching pro Tory Fretz, recalled that Gussy, “was brilliant and a beautiful and prolific writer. She was such a free spirit and way ahead of her time. But  she was so proud, and didn’t want our help. That was the whole problem.” Gussy died in her Van Ness Avenue apartment on January 13th of colon cancer. She was 89.

But before you dismiss her as merely a one-hit wonder who lived off her 15 minutes of fame, just tune into a tennis tournament. Here there is a  celebrities-welcome game that embraces catwalks and catsuits; a rollicking sport which (this side of beach volleyball,) more than any other, empowers women and celebrates their ample, toned bodies. Here glamification is all but worshiped. Amidst sequins and sass, a “glitz is good” ethos prevails. Sure, we take for granted all this femininity, athleticism and style which now define the game. But as the legendary Jack Kramer noted, “Gussy  was the Anna Kournikova of her time, Gussy was a beautiful woman with a  beautiful body … [and] besides everything else, Gussy could play.”

Tinling, who died in ’90, noted that he and Gussy had “changed the entire way sports girls could look … [we] blew up the traditional edifice of sports.”
No kidding. Now – amidst bottoms and breasts and bulging muscles and bank accounts – tennis empowers wannabes from Burbank to Belarus to shout  “I am woman, hear me roar” thanks in part to a fearless  lady in lace, the accidental revolutionary, Gussy Moran.