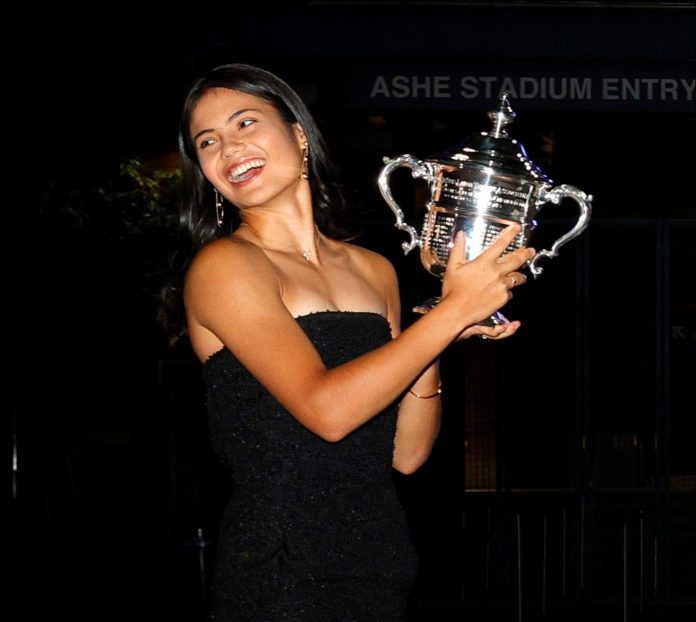 As I stumbled out of bed this morning the view was foreboding. Outside my window, on this day of mourning, the New York scene was grim. The old Intercontinental Hotel across the street on 48th Street had been transformed into a fortress. Well-armed cops, flashing lights, barricades of every type, keen-eyed plainclothesmen and huge orange dump trucks ringed the place. It was meant to protect and intimidate. It sure did.

The leader of the free world, in town to commemorate the 20th anniversary of 9/11, was staying on one of the three floors that the White House had taken over. The scene in this era of terrorist threats was grim.

How ironic that within this citadel, which is the Open’s official player hotel, were two teenage girls who exude innocence, who broke through their own considerable barriers, using joy, youth and well-armed groundies as unlikely weapons to delight millions.

Within the fortified castle across the street, two young women would emerge to bring the world the first final between two teens since 1999 – kids who earlier this summer were virtually unknown.

While the men’s final Sunday will feature the No. 1 and No. 2 seeds, Novak Djokovic and Daniil Medvedev, the women’s final, with No. 73 Leylah Fernandez and No. 150 Emma Raducanu is the most unlikely, and perhaps most enthralling US Open final in memory. And the first final ever between two unseeded players.

The two have distinct differences. Leylah just turned 19. Emma is 18. One is a lefty, the other a righty. Leylah is just 5″ 6, Emma is 5′ 9″. Raducanu says, “Anything is possible.” Fernandez says, “Nothing is impossible.”

Both are of mixed heritage. Raducanu has a Chinese mother and a Romanian dad. Fernandez has an Ecuadorian dad and a Filipino-Canadian mom. Both greatly value education, neither suffered from toxic pressure growing up, and both got goodwill messages from their prime ministers – Justin Trudeau and Boris Johnson.

The pioneering Original 9 were out on court for the coin toss, but it was the dazzling new duo who captivated the crowd. Today, Raducanu came out on fire. Putting Fernandez on her back foot, Emma won seven of the first nine points. In a marathon second game, she took advantage of two double faults by Leylah and on her sixth breakpoint, forced a forehand error to go up 2-0.

But Fernandez, whose singular skill is her fighting spirit, broke right back. Clearly Raducanu had more size, more power and more ease. Her serve out wide is a weapon. But her speedy foe, who as a nine-year old was booted out of Montreal’s tennis development program, used her anticipation to create angles, and fought off deficits in game after excruciating game.

Then in the tenth game the Houdini-like Canadian saved three set points. But the poised, remarkably unflappable Raducanu pounded a forehand winner to grab, after 58 minutes, an intense first-set win, 6-4, in which she blasted 11 winners and took advantage of Fernandez’s surprisingly shaky serve.

At the beginning of this year Emma’s goal was just to make it directly into the 2022 Australian Open main draw. Only a few months ago she was taking her high school final exams. Now, playing in just her second Slam, she didn’t allow her foe to win more than four games in a set, just as she had done with her nine previous opponents.

“It’s like Raducanu has forgotten how to lose a set,” quipped Chris Fowler. But throughout the tourney Leylah has said her one key word is magic. She told us she wants to put on a show. So, as she’d done throughout the tournament and would do again in the final, she battled back. Leylah broke Raducanu’s serve to go up 2-1 in the second set and gave the regal young Brit a taste of the grit that had baffled one star after another New York. But then a crosscourt backhand by Emma caught the line and she blasted a backhand return of serve to break right back and even the score at two all.

Fernandez would soon strike a short forehand that looked like a sure winner, but Raducanu reacted beautifully and unleashed a fearsome forehand down the line to score a second straight break and go up 4-2.

She seemed to say, “Leylah, you can scamper, you can battle, you have grit, but I’m more powerful. I haven’t dropped a set in New York yet, and I’m going to win.” Soon, Raducanu powered her way to two championship points on Leylah’s serve, but thanks to some inspired defense and the passionate New York crowd, Fernandez soldiered on, and seemed to have the ascendence.

As Raducanu tried to serve for the championship, Leylah had her foe on the run, and the Brit tumbled badly. Fernandez had the crowd at her back and a breakpoint in hand, but Raducanu, who was bleeding from her knee to her shin, took a medical time out that stopped the drama in its tracks. Leylah was not happy.

Fernandez would get a second break point but couldn’t prevail. Finally, on her third championship point, Emma blasted a 108-mph ace to the corner. Raducanu now had done what the best hard court player in the world, Naomi Osaka, couldn’t do. She’d done what the No. 2 seed Aryna Sabalenka couldn’t do. She did what no British woman had done in 44 years, and she became the youngest player to win a Slam since Maria Sharapova in 2004. Plus, incredibly, she became the first male or female qualifier to ever win a Slam.

Emma fell on her back, her chest heaving, her tears flowing. Chris Fowler noted that her win today was “all about blood, sweat and tears.”

The under-the-radar player was now over the moon. Britain, a country that has long gone bonkers over its tennis players, will now embrace Emma, who has the same agent who guided Maria Sharapova, and send her into a superstardom orbit.

Just three months ago Raducanu suffered a panic attack on Wimbledon’s Court One. Today her attacking game lifted her to one of the most amazing titles in memory. As the sun’s golden glow bathed Arthur Ashe Stadium, tennis lovers everywhere envisioned a golden future and over 23,000 delighted fans left the arena knowing that today’s duel by a darling duo was, in its own graceful way, an endearing symbol of renewal. 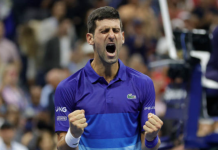