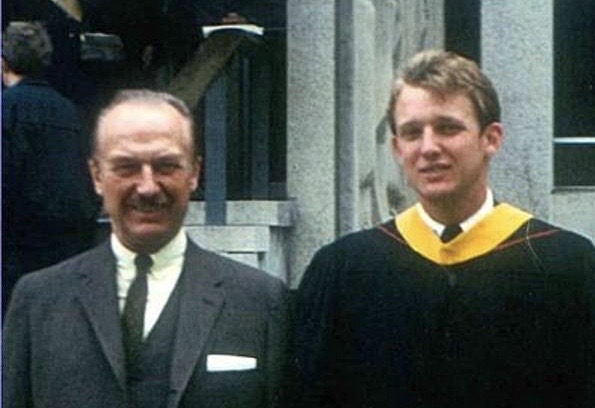 Mary Trump’s new, bluntly titled book, Too Much and Never Enough: How My Family Created the World’s Most Dangerous Man has been a sensation. The tell-all of all recent tell-alls that dives deep into our president’s family history and mindset sold a record-breaking 950,000 copies on its first day of sales.

One of the most eye-popping stories in the book claims that when Mary’s Uncle Donald was a student at Fordham University he craved getting into the prestigious Wharton School of Business at the University of Pennsylvania. But he feared his dreary grades would derail him.

His niece wrote, “To hedge his bets he enlisted Joe Shapiro, a smart kid with a reputation for being a good test taker, to take his SATs for him. That was much easier to pull off in the days before photo IDs and computerized records. Donald, who never lacked for funds, paid his buddy well.”

Trump got into Penn. Decades later he repeatedly informs us, “I went to all the best schools.” He clearly loved the cache of being an Ivy Leaguer, even though, according to his former attorney Michael Cohen, Trump insisted that academic authorities never release his high school or college records. Never mind that he often demanded that Barack Obama reveal his grades.

And now for the tennis connection. None other than Hall of Famer Pam Shriver – whose late husband was named Joe Shapiro and who knew Trump well – was swept into the family feud. It wasn’t the first time Shriver had been in the national spotlight. In 1978, as an untested 16-year-old amateur from Maryland, she scored a sensational upset over reigning Wimbledon champ Martina Navratilova to become the first player in 41 years to reach the US Open final in her first appearance.

Now she’s in headlines and on TV not because she won 133 tourneys, 22 Slams and an Olympic gold medal, but because her late husband had the same name as the guy who supposedly took Trump’s SATs.

Pam wasn’t pleased. The longtime commentator, who’s beloved in many tennis circles, recalled her late husband, an attorney and former Disney executive named Joe Shapiro who met Trump at Penn and who died in 1999 from lymphoma. Shriver said her husband “always did the right thing, and that’s why this hurts.”

She noted that Shapiro and the president were both New Yorkers who “shared a love of golf. Trump did keep in touch a bit over the years, and we visited him a few times at Trump Tower.

“When you put somebody’s name in print in a book, you want to make sure the facts around it are correct, especially if they are not living because it’s not like Joe is here, and he would have known how to deal with this.” Pam noted that years ago she was contacted by a journalist about this claim and she refuted it at the time. “It feels unfair,” she asserted.

Mary Trump’s publisher, Simon and Schuster, said they stand behind the book. In a CNN interview Mary Trump explained:  “I don’t believe that’s the Joe Shapiro we’re talking about…I feel awful that Pam Shriver has had to be bombarded with this question, because if you look at the timeline…it’s impossible [Trump and her husband] met at Penn. Donald needed somebody to take the SATs when he was at Fordham in order to get into Penn. And the other thing that’s been dismissed is that in New York City the name Joe Shapiro isn’t exactly unique.”

Mary went on to say, “It was a story that I’ve been told, and like any other family…stories are passed down and that’s why even though I wasn’t there at the time…I can vouch for it because I trust my source, who was somebody close to Donald, and I have no reason to make that story up. The book would have been just fine without it, but it does speak to his character and this has been part of his character all along, or at least since he was a teenager. So I think it’s time to start asking my family that question directly.”

President Trump said the SAT incident never happened and dismissed his niece. His press secretary said Mary Trump’s work was “a book of falsehoods and that’s about it.” The president tweeted, “Mary Trump, a seldom seen niece who knows little about me, says untruthful things about my wonderful parents (who couldn’t stand her!) and me, and violated her NDA. She also broke the Law by giving out my…Tax Returns. She’s a mess!”

Mary countered, saying that she didn’t reveal the president’s tax returns, only financial information that was hers.

While known for his passion for golf, the president has a long history with tennis. For years he went to his well-placed US Open suite (often protected by his lead bodyguard, Vinnie) and enjoyed all the swooning attention that came his way. Sports Illustrated’s S.L. Price said that it “was impossible to resist his playboy aura…It looked like he owned the US Open.”  Then one year he was booed. He has never returned.

His longtime assistant Rhona Graff was a US Open volunteer, a regular on the New York tennis scene and an early contributor to Inside Tennis. Long before she testified to Congress, she told IT, “Seventeen years ago I worked for a real-estate magnate who was also a celebrity. Now I work for a celebrity who also does real estate.”

Trump played with the idea of becoming a tennis agent. He owns a tennis club in Virginia that Serena helped open and danced with her at his New Year’s Eve party in 2015. In 2004, he gave IT an interview. Never mind that we were cautioned not to ask him about his hair.

After he got out of his limousine at the Trump National Golf Course on the coast south of L.A., he turned to me and told his entourage, “This guy has got a great tennis magazine. I read it all the time.”

Soon we were walking his course and eating soup in the expansive clubhouse. He asserted, “This is the best clam chowder in the world.” He added that at the US Open, he had the “best box in Ashe Stadium,” and he said, “I build the best buildings. I build the best clubs and golf courses, and then they just sort of take care of themselves.”

When I referenced a quote in one of his books – a claim by Abraham Lincoln that power can undermine character – he said, “Well, I’ve seen many people change a lot with power. Power can change a person greatly.  I’ve seen people get better, but usually I’ve seen people get worse. I’ve seen it politically. All of a sudden they become total monsters. And they usually crash and burn.”

As for tennis, he referred to Billie Jean King winning the 1973 Battle of the Sexes and admitted, “I was a victim of Bobby Riggs getting his ass kicked.” In 2004 he suggested that 17-year-old Maria Sharapova visit him so he could advise her about handling money. As for that year’s Wimbledon final, he said, “Serena is used to looking like the star. Now all of a sudden she was facing this girl who’s a supermodel beauty…I think she looked across the court and said, ‘I’m playing against a supermodel.’ I think it had an impact.”

He added, “Aura is the whole thing. Perception is an amazing word…But, it doesn’t always work. The perception was that Serena couldn’t be beaten, but she got her ass kicked. So you never know.”

What we didn’t know until recently was that out of nowhere “our Pammie” would be drawn into national politics. Then again, she long has been associated with presidents. Her much celebrated Shriver family is part and parcel of the history of the Kennedy Camelot Clan that once inspired so many. Pam was a friend and campaign advisor of George H.W. Bush. When he passed she wrote, “I want to send 1,000 points of sympathies to the family and friends of President George H. W. Bush.  I am honored to have called him my friend…He was a gentleman with incredible leadership skills and a keen sense of humor.”

Few tennis commentators are quicker with a quip than Shriver. When Chris Evert asked her, “Does anyone over six feet move as well as Venus?” Pam replied, “Federer.” On a scorching Aussie day, Evert noted that Sofia Kenin “seemed frozen out there.” On court, Pam joked, “That’s the only thing that’s frozen out here.”

Of course, there were times when Pammie faltered. She once admitted, “If I ever lost to a 14-or 15-year-old, I’d die right on the court.” She soon fell to 14-year-old Gabriela Sabatini. Shriver loves arcane factoids. She tells us, “Left-handers have it rougher serving into the sun in the southern rather than the northern hemisphere.” At a long-ago trade show, she informed us that badminton shuttlecocks are always made from feathers from the left side of geese.

She can be bitingly self-critical. After being crushed by Steffi Graf in a Wimbledon semi, she confided, “The turning point was when we walked on the court.” More recently Shriver celebrated herself.  “All my priorities have changed,” she observed. “Right now, I’m a person of ideas.”

As a commentator she often wore pearls and gave us pearls of wisdom. “Watching Federer warm up,” she shared, “is like doing yoga. I feel relaxed already.” During a US Open women’s match in a windstorm she claimed, “You have to have a hair management strategy.”

When the excitement of one match reached a fever pitch, she explained that the animated fans “would be going through the roof, if the stadium actually had a roof.” The most underrated wordsmith in American tennis can be quite a critic. She observed, “Some of these players grunt when they dropshot, and no dropshot deserves a grunt.” Known for her sharp volleys, she offers verbal volleys too. “Some of Aranxta Sanchez-Vicario’s rallies lasted longer than her marriage,” she commented.