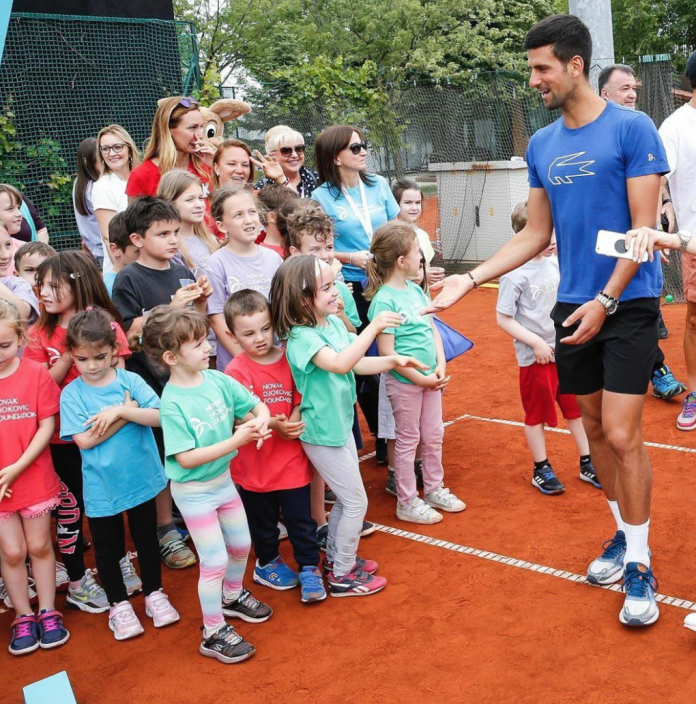 It’s not easy to reach the top. Once you’re there, it can be rugged. People want you to show the way, or better yet, to inspire. Often it’s tough to lead.

Former President Truman may or may not have been right when he became the first and only person to drop an atomic bomb. Still, the famous sign on his White House desk made it clear. “The Buck Stops Here.”

But the No. 1 player in the world, the fabulously talented Novak Djokovic, just doesn’t seem to grasp the notion of a leader’s accountability.

I actually love Novak. I believe he’s the greatest craftsman to ever lift a racket. He’s funny, wise, a deep thinker and a seeker who reflects on the fate of children and the nature of our souls. His press conferences can be intellectual deep dives that offer thoughtful gems. But something is wrong – very wrong. He’s had serious and ongoing problems being a leader. He doesn’t understand a simple and central principle of leadership: accountability. In the past 16 months, he has faltered as a leader, not once, but at least five or six times.

Most recently his well-intended charity event, the Adria Tour, went terribly wrong. As his pals and fellow players gathered together they frolicked in discos, hugged each other, packed in 4,000 fans without masks and endangered dozens of kids. Okay, strictly speaking it didn’t violate Serbian rules. But it did counter common sense. It was a celebration of unfiltered arrogance, a caution-be-damned, science-be-damned happening.

ATP player Bruno Soares was blunt: “I sum it up as a horror show. Enormous irresponsibility and huge immaturity.” Nick Kyrgios tweeted it was a “BONEHEAD DECISION.”

First Grigor Dimitrov and then Viktor Troicki, a coach, Borna Coric and Goran Ivanisivic tested positive. But Novak refused to get tested in Croatia. When he returned to Serbia, he and his wife both tested positive.

Djokovic’s father Srdhan promptly criticized the victim – Grigor Dimitrov. “Why did it happen? Because that man probably came sick, who knows from where. He didn’t test here, he tested somewhere else…I think that’s not fair.” “[Grigor] inflicted damage to both Croatia and to us as a family in Serbia.”

Today, Novak himself again claimed he was a victim. “I can only see criticism lately, and much of it is malicious,” Djokovic told Serbia’s Sportski Zurnal. “It’s obviously more than just criticism. It’s like an agenda and a witch hunt are on. Someone has to take the fall – a big name. My intention was pure, I was wholeheartedly committed to organizing a humanitarian event to help players and tennis federations in the [Balkan] region. We complied with all the laws and regulations. But we’ve learned our lessons and some things could have probably been done in a different way.”

Novak’s lack of accountability goes back to the 2019 Indian Wells tourney, when as head of the ATP Council he played a key role in ousting the ATP’s rather popular Executive Director, Chris Kermode. Writers wanted to know why, but instead of explaining Novak repeatedly sidestepped simple requests to explain the move.

Djokovic said, “It was decided…that it is time for us to look into new leadership…That’s all there is.” He claimed inexplicably, “confidentially” prevented him from explaining the firing.

Novak’s off-court problems continued to grow. Time and again, he failed to step up to clearly address and resolve the problematic involvement of ATP Council member Justin Gimelstob, who was involved in a violent 2018 Halloween fight in Los Angeles. Novak’s shortfall and the inaction of the ATP Council prompted three-time Slam champ Stan Wawrinka to write his celebrated “Silence is Complicity” letter: “What I have witnessed…is a worrying decline in moral standards…Many within the game think this episode is now over and are simply relieved at not having any negative press themselves. This is not good enough. We are ALL accountable and we must ALL learn from this…The lack of response…was alarming. This is a situation where silence amounts to complicity…[The board] should have immediately managed this controversy…I do not want to be associated with anyone who played a part in this…I want to be represented by people with clear, strong ethical values…The fault lies…in the caliber of people within it. This political chaos is caused by a handful of people with personal agendas…It is more important than ever that anyone with a public platform leads by example and demonstrates real values – Honesty, Kindness, Trust, Friendship.”

Then, at the Italian Open, Djokovic again discounted his role as a leader. “The way it was presented in the media I didn’t really like it and I don’t think it’s fair you guys point out myself as the decision maker…I am the president of the Council but it consists of ten players, so the majority decides. I’m one of ten…It’s not about accountability, it’s about the way you guys are portraying the whole process. kind of putting all the weight on one guy…Everyone holds me accountable for every single thing that happens in tennis at the moment, which I think is unfair…there is a lack of respect. Just pointing out one guy and putting all the pressure on him… ” 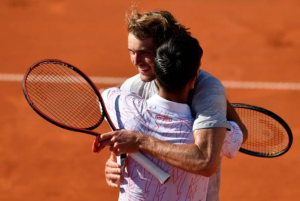 Then at Wimbledon Novak conceded that he had not read the disturbing victim statements in the Gimelstob case that were read aloud in court. He contended that Justin wasn’t guilty [although the judge told Gimelstob that due to his plea of “no contest,” he would be considered guilty.] His press conference got testy. Soon I found myself entwined in the most contentious interview room exchange I’d had in 40 years of covering tennis. The dialogue, in part, went like this.

Djokovic: There is no reason for you to attack me.

Simons: I’m not attacking you at all.

Djokovic: That’s how I feel.

Djokovic: Just a second, listen…I understand that. You were expecting me to be responsible for the Council and for the players because I represent them…I just don’t feel it is necessary for you to point a finger at me specifically for something that he has or hasn’t done…That’s all.

There is no reason for you to talk to me in that way because I feel like you’re pointing the guilt at me for some reason for what he has done or for supporting him.

Simons: I’m not accusing you of any crime.

Djokovic: I know you’re not accusing me of a crime. I feel like you’re putting me on the spot because of what [Justin] has done or that I have not been taking enough action as a leader. That is what you are referring to.

Simons: Because of what you have said. Because you haven’t looked into a very serious situation.

Then Novak won Wimbledon. We had a brief exchange at the US Open. Then by a wild coincidence he had a wonderful December encounter with my nephew in Bali. At the Australian Open we laughed together with glee. He was so kind.

But then, as the pandemic hit hard, Novak said he might well not get a vaccine and claimed, “Water can be changed by simply meditating or thinking…[through] the power of prayer, the power of gratitude. [Some people] turn water into the most healing water…Scientists have proven that…molecules in the water react to our emotions [and] to what has been said.”

Maybe some evolved souls can drink polluted water without harm. But many felt it was problematic for a sports leader to say that during a pandemic. Writer Simon Briggs wrote, “Great athletes think they are invincible  – otherwise they wouldn’t be great athletes. As a result, some of them are struggling to process the scientific guidance around COVID.”

Mary Carillo asserted, “Novak does not believe in the sanctity of science. He is one of so many people in this world…that think science is just another opinion, and that scares me.”

Novak said, “Limits are only illusions of your ego and your mind.” Then as the USTA revealed its guidelines for play at the US Open, he was incensed, claiming, “The rules …are extreme. We wouldn’t have access to Manhattan, we’d have to sleep in airport hotels [and] be tested…We could bring [only] one person to the club, which is really impossible.”

The WTA’s Danielle Collins bristled: “It’s easy when someone’s made $150 million to…turn down playing the Open. For those of us (most tennis players) who don’t travel with an entourage, we actually need to start working. It would be nice to have the best player in the world supporting this opportunity and not spoiling it for the players and fans!”

Odds are that the 17-time Slam winner Novak Djokovic will become the greatest player of all time. But rarely in sports has an athlete who leads the pack on the court been so flawed in his leadership off-court. It’s not only a shame – it’s a mystery. After all, to me, this unique man is so wonderful in myriad ways. But, sadly, when it comes to accountability, the buck rarely seems to stop with him.

The Trump Family Feud, Pam Shriver and the Mystery of Joe Shapiro