While statues fall around the world, we note that statues have long been a part of tennis lore.

They are crashing all over our country – and all over the world. The seemingly eternal likenesses of Confederate icons, slave traders, colonial tyrants, controversial explorers and inner-city bosses are tumbling down.

In contrast, 24 years years ago, arguably the most important statue in tennis went up.

In 1996, after a bitter struggle, a modest $400,000 statue of Arthur Ashe was unveiled on Monument Avenue in Richmond, Virginia. In life, Ashe broke so many barriers, and the statue of the African-American hero crashed a kind of Gone with the Wind party. The Park Service describes Monument Avenue as “the South’s grandest commemorative precinct dedicated to the heroes of the lost cause.” Its commanding statues of Confederates Robert E. Lee, Jefferson Davis, Stonewall Jackson and J.E.B. Stuart are revered by some. Putting Ashe’s statue there, was, according to one critic, like “putting a bowling alley in at Mt. Vernon.” But Ashe himself said seeing the Confederate statues “revived bitter memories.”

Last night the statue of Jefferson Davis, the President of the Confederacy, was toppled. Ashe’s statue still inspires. Author Richard Evans recalls, “When I lived in Richmond, I found it difficult to drive past Ashe’s statue without getting a lump in my throat. Compared with the huge, preposterously imposing statues of Confederate generals that adorn Monument Avenue, Arthur’s statue is relatively small, but no less emotive.”

Some statues are captivating, others not so much – and they always attract birds. Claude Chabrol insisted, “You have to accept the fact that sometimes you are the pigeon, and sometimes you are the statue.” The world’s most beloved statue, the Statue of Liberty, celebrates America at its best. School children know well our generous promise: “Give me your tired, your poor, your huddled masses yearning to breathe free, the wretched refuse of your teeming shore. Send these, the homeless, tempest-tossed to me. I lift my lamp beside the golden door!”

To actress Kim Canttrall, “Sculpture is the art of intelligence.” Statues can express an essence beyond words. Michelangelo’s David in Florence evokes wonder. Some statues celebrate spiritual leaders. Jesus looks down on Rio. Massive Buddhas are carved into Asian mountains. Others represent monarchs or tyrants.

Often, when statues are toppled, they spark passions, as when Saddam Hussein’s likeness came down in Baghdad. And there was a memorable scene in the movie “Goodbye Lenin,” when a helicopter in just-liberated East Berlin whisks away Lenin’s huge stone image.

Statues can be the subjects of ridicule. The French say, “We behead our scoundrels – and then make statues of them.” The citizens of Lucille Ball’s Celoron, New York hometown howled when the infamous “Scary Lucy” statue was unveiled.

In sports, there are classic European sculptures of Greek discus throwers and French archers. American sports stars, from Michael Jordan to Willie Mays, have their own statues. The most famous is boxer Rocky Balboa’s image in Philly.

In tennis, statues have a long, quirky history. The Italian Open is held at Rome’s Foro Italico, which features eighteen marble statues 15′ high of nude muscle men with assorted athletic props. They were erected by Mussolini as part of a theme park. For years at the Italian Open the prime tennis court was overseen by a statue of a skier. Go figure. 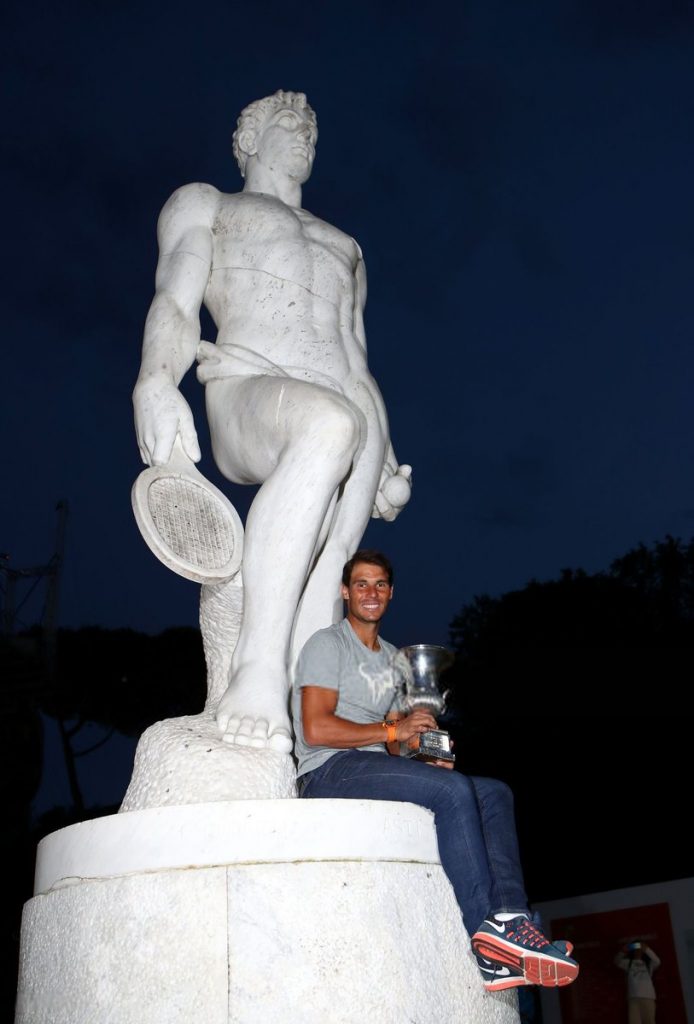 There’s a statue of the French pilot and hero Roland Garros in Tunisia, where he died in a crash. In 2017 the Aussie Open unveiled a statue of Rod Laver wearing one Dunlop and one Adidas sneaker – after all, he had contracts with both companies. And last August at the US Open a stunning 9’ statue of tennis pioneer Althea Gibson was unveiled and celebrated.

At Wimbledon, the stately statue of Fred Perry had long had an honored, can’t-miss-it place in the middle of an intersection. But, due to construction, it has been moved to a low-profile niche where it’s easy to miss.

Worse yet, the game’s foremost cluster of statues – the French Open’s Four Musketeers Statue Garden, which had been a wonderful gathering place – was simply removed. The images of René Lacoste, Henri Cochet, Jean Borotra and Jacques Brugun were all put in storage. When last asked, authorities were vague about where they are and when they’ll reappear.

Along with Laver’s image, Melbourne loves its tennis sculptures. Dozens of images of stars abound: Newk, Emo, Hoad, Rosewall, Rafter, Pat Cash, Goolagong – all the Aussie legends. A statue of the controversial Margaret Court is right outside the arena named after her, just as a statue of the balletic Suzanne Lenglen greets you as you approach Lenglen Stadium in Paris (never mind that Suzanne never played at Roland Garros).

There’s another statue of Althea Gibson in New Jersey. But there’s no high-profile statue of “Mother Freedom” – Billie Jean King. In 2007 the ATP commissioned statues of eight of its players – including Federer, Nadal, Djokovic, and Murray – to appear as fabled Chinese terracotta warriors.

Already, there’s a fine statue of Djokovic at the Malibu Racquet Club. Fans continually gather at the statue of Serena and Venus in the African-American Museum in Washington D.C. Nike created a statue of Nadal, the king of clay – in clay. What fun.

“A statue has never been erected to honor a critic.” – Jean Sibelius

“What can you learn from a statue? You can learn to stay calm whatever happens!” – Mehmet Murat Ildan

“The apathy of the people is enough to make every statue leap from its pedestal.” – William Lloyd Garrison