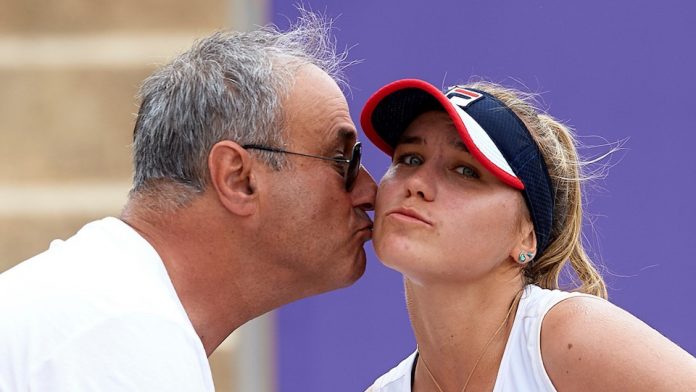 These days there are so many top players who are Russian, including Daniil Medvedev, Karen Khachenov and Andrey Rublev, to name a few. Others migrated east to nations like Kazakstan. There are many players of Russian heritage, as well, including Alexander Zverev, Stefanos Tsitsipas, Denis Shapovalov, Amanda Anisimova (whose Dad died in August), and, of course, Australian Open finalist Sonya Kenin. So often these players have had their parent as their first coach. Kenin and her father Alexander have a wonderful chemistry. The loving kiss he gave her just before she went out on court for the semis showed their closeness.

He’s a bit burly and a tad gruff, but he has a gentle twinkle in his eye, and he’s funny. Today he spoke with the media.

Why do you think there are so many great players who are of Russian heritage?

There is something there. It is very tough and very bitter, oh, my God.

If you had to pick one word or phrase to describe your daughter?

I don’t know – best person in the world.

So how did you get to America?

We left the Soviet Union when it was a very different country. [I] left in 1997 with my wife. Sofia was born in 1998…We all met in Florida.

Why did you leave?

I wanted a better future for the kids. It was a completely different country where everything was not allowed. I was trying to get out for eight years and they controlled everything.

It wasn’t bad, you were young and had friends, but you wanted to see the world and provide a better future for your kids.

Sonya’s very patriotic. Was there ever a debate on whether she’d represent Russia or the US?

No, it’s never been an issue. She has very little connection with Russia except that she was born there. She is an American citizen and has lived in America all her life.

How do you think your journey and sacrifices have shaped her as a player?

I don’t think she experienced much of the sacrifices we had to go through…We just got to this country and it was very, very tough. I had to work at night and go to school in the morning. It was very tough, but it’s amazing the things you do when you need to survive.  She knows that.

Were you a driver in New York when you came over?

I was going to computer school in English and also going to school for English.

Sofia started playing with some of your rackets when she was young. When did you get into tennis? Were there other sports?

I played basketball and football, not American football [i.e. soccer]. There were not that many courts. I enjoyed it at the amateur level.

How old was she when she first started?

I would say three and a half.

How and why did she start and when could you tell she had a real future?

She started very young…I had my racquets at home…I asked her to just try…She tried and we said, “All right, come on.” At some point she was much better than those bigger kids, so I said, “Let’s try and make this more serious.”…[We chose] Rick Macci [as her coach]… I had no idea who he was. But it seems like it was a good choice…[He provided] a good foundation.

At what age could she beat you in tennis?

By [the time she was] 10, 11, I got left behind. I remember all those tournaments, in the strangest places all around the United States. I was driving at night to find somewhere we could practice in the morning. I always had a basket of balls.

How emotional were you yesterday when you reflected on your journey?

And if you had to pick one thing that Sofia did so well that allowed her to reach the final?

Consistency in emotion. It’s hard work – it’s not very easy. It was decided that that’s what we want to do and we did our homework.

I guess I was right.

Sofia said she wants to live in New York. Would you agree with that?

Plans change.  She wants to do a lot of things.

Dinara Safina was in your box during the last match. Do you have a special relationship with her or is it just for the occasion?

She’s just a friend. We met on the road a few times and found we had a lot in common.

Do I need to answer? I am a little nervous, but I’m trying to do a better job.

Sofia has been in her first quarterfinal and her first semifinal. She handled it so well. Facing Garbiñe Muguruza, who is more experienced, how do you think she will handle the occasion?

It is very nerve-breaking at every stage. This is a big tournament. But it’s the same court, the same size, the same players. We are trying to take one day at a time. It’s a match.

Tennis in America: Upbeat USTA Chief Dowse on the US Open and the Opening of the Game