Long ago the singular rock star Jimmy Buffet sang that he was “wastin’ away in Margaritaville/searching for my lost shaker of salt.” Fast forward 42 years to Indian Wells and voila, over 2,200 athletes arrive in the Coachella Valley in search of pickleball glory, gold medals and some of the $80,000 in prize money at the 2nd Annual Margaritaville USA Pickleball National Championships.

Pickleball, which combines elements of tennis, badminton and ping-pong, again proved to be the new game with a fun name played on a little court that’s having a big impact. Players enjoyed the Coachella Valley – and they loved being in Margaritaville. 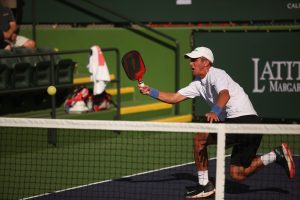 Once again Cammy Mac, that’d be Torrance’s Cammy MacGregor, won gold in the Women’s Senior Singles division and Paul Olin won out over 2019 champ Scott Moore in the Men’s Senior Singles. In Men’s Open Singles, Tyson McGuffin hoped to defend his crown, but challenger Ben Johns played aggressively and took the title in straight sets. The final contest of the tourney was the Women’s Open Singles, which featured a tight first frame ending in extra points.

Defending champ Lucy Kovalova prevailed in the opener but Simone Jardim didn’t blink, and won the second set without losing a point. The third set saw both competitors on serve until Jardim’s momentum carried her to the gold. Simone also won the Women’s Skill/Age Doubles and Mixed Doubles Open. To watch replays of this year’s action, click here. Next year the nation’s biggest pickleball tournament returns to the Indian Wells Tennis Garden October 31 – November 8.