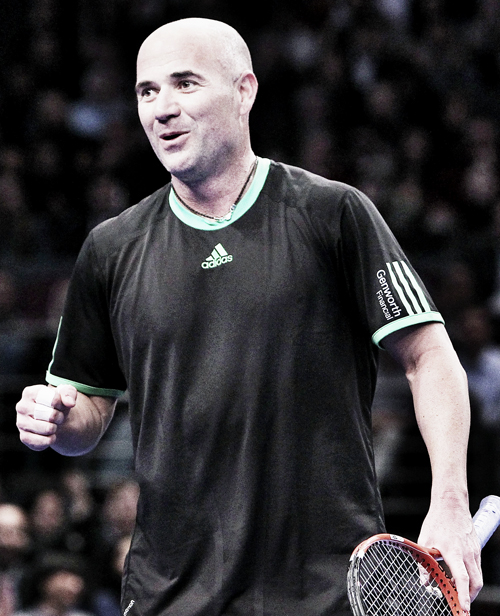 The ball. Fuzzy and yellow, pressurized, weighs about two ounces. That’s why we know Andre Agassi, because he could always hit a tennis ball earlier and harder and more accurately than just about anyone. Would we have ever met him otherwise?

The head. Once covered by a wild mop of hair that varied in length and color. It was also, at one time or another, bearded, stubbled, bandana’d, mascara’d, capped, pierced, and then, finally, bald. The only thing that never changed about Andre Agassi’s head were the eyes, those big intense brown eyes that the great writer Gary Smith once described as being “unlike any you’d seen in an athlete: aglow.”

But for so long we cared not so much about what was behind those eyes but the other stuff, the stuff on top or around it. The hair, the earrings, the wild clothes.

Image is Everything, isn’t that how it went? “A haircut and a forehand,” isn’t that what Lendl once said of him?

The boy wonder became a star. Then a joke. Then a champion. Then a has-been. Then a legend. And not because of the hair or the forehand or the commercials, but ultimately because of the work he put in towards the end, before it was too late, a renewed dedication and sense of purpose turning him into not just a champion but one of the best that ever lived. All because of what was happening behind those eyes.

By the time he walked away from the sport six years ago at the age of 36, Andre Agassi had traveled one of the most remarkable journeys in sport, a comeback tale both professional and extremely personal. And we were lucky enough to be along for the ride, though he always told us how much we meant to him, too. “You have given me your shoulders to stand on, to reach for my dreams, dreams I could never have reached without you,” he said in that tearful New York goodbye. “Over the last 21 years, I have found you, and I will take you and the memory of you with me for the rest of my life.”

It was so hard to say goodbye.

But on a magical night in Anaheim – and just down the road from Disneyland, no less, The Happiest Place on Earth – it was so lovely to say hello again. …

We heard him before we saw him. More than two hours remained before he was scheduled to play John McEnroe at a legends event here at the Honda Center, normally a wild hockey arena this time of year but not now, not with the NHL engaged in a labor dispute that for much of this winter has left the place quiet and empty, and still empty now except for the hot dog and T-shirt vendors who were just beginning to show up, just as we were.

And then we heard him. We could hear him all the way up from the main concourse.

And then there he was, in the belly of the empty arena, on the makeshift tennis court where there would normally be a hockey rink, hitting tennis balls with a few very lucky locals. These were the weekend warrior types – the manager of the right racket shop, an executive from the right sponsorship company, a kid who evidently knew someone who knew someone – and they were all down there on the other side of the net from Andre, who was still begging them to hit harder. “Hurt meeeeee!”

They tried, many of them, rearing back and putting all of their might into hitting that fuzzy yellow ball as hard as they could, and taking dead aim at the legend they knew so well – that’s how it is now with someone like Andre, when you see him you actually feel as if he’s an old pal.

And then, finally, it happens – the manager of the racket shop cracks a clean winner, the hardest forehand he can hit, and it screams past the legend’s outstretched racket. Just before he’d been volleying back everything with ease. Now the legend was smiling.

Was this really Andre? The same guy who walked away in part because his body was breaking down, bad back and all? Because here he was effortlessly and joyously running, bouncing, swinging. His sleeveless shirt revealed sinewy biceps. Is this what retirement looks like?

And was he really still saying those words – HARDER! HIT HARDER! – the very phrase he so loathed hearing as a kid, his obsessive father yelling it out to him for as long as he can remember?

You wondered if he saw the irony in this, in all of it. The fact that he was down here saying these words, but flipping the experience (the fans on the other side giggled with delight each time). And the fact that upstairs on the main concourse, those T-shirt vendors that had just arrived moments before were now unfolding shirts that depicted the very thing Andre hid behind for so long and ultimately shed: the shirt depicting nothing but a mop of hair, a headband and earring. Agassi even admitted after retirement that the whole getup, for much of the time, was actually a hairpiece.

And then you realized, of course. Of course he saw the irony in it, in all of it. He sees everything so clearly now, through the prism of time and perspective his age and experiences have now spawned. He says as much a few minutes later, after a few more forehands and photos with the fans, when we noted just how much fun he seemed to be having out there, in this empty arena, just hitting balls with a few strangers.

“Tennis got more fun as I got older and as I took ownership of it, but now there’s no comparison,” he says. “Now it’s only good. You’re at a stage in your life when you can really take in these moments, you know it’s not life changing win or lose, but at the same time you feel good about yourself if you’re doing it well and you’re enjoying connecting with the sport that’s given you a pretty big platform.”

And two hours later, in the arena that eventually fills with thousands, he gives them what they came for, gives them what they want. His forehand, as clean as ever. His charisma – “Dinner’s on me!” he proclaimed after beating both McEnroe and Michael Chang easily – same as it ever was.

Afterward – his bald head still sweaty and the whites of those eyes reddened with either adrenaline or tiredness or both (he’d flown in at about 2 a.m. the night before) – Agassi reflects on it all, in the locker room of the empty-again arena, after all the people had gone away.

“It’s overwhelming,” he says of his life now, which includes his wife Stefanie (as she now likes to call herself,) their two kids, his charter school in Las Vegas for at-risk youth and his foundation which aims to bring similar programs to more inner cities across the country. “I never could have dreamed this. The platform now to do bigger and better things, post retirement, it’s been like a canvas.”

And to that point we can probably agree that the legend has now become something of an artist, his school in Las Vegas serving as a beacon of hope and an example of what Can Be, which is essentially the story of Andre Agassi.

And what, we ask him, of Southern California? After all he lived here once, a few miles north in Los Angeles, back when he was married to Brooke Shields, the Hollywood star. “It was an interesting time in my life, unquestionably,” he says. “I remember a lot of good people, a lot of artists, a lot of talented people you’d eat dinners with and meet. They always had these interesting experiences, and I loved learning from people here.

“That’s what I remember taking away. I loved the Canyon – we used to live on [Topanga] Canyon, and I loved feeling that you’re so close to so much action, but you’re also away. It was a nice feel. But it was a tough time in my life, too, so it quickly kind of turned to something else.”

He left that place, that life, on a rainy night in 1999, hastily packing a blender, a bag of coffee beans and one of his favorite paintings into his ’76 El Dorado after he and Brooke decided it was over. Driving away, back to Las Vegas, was a new low in his life.

And now here he was again, another rainy night in SoCal, 13 years later and about to leave once more. Only now the destination was a little different: he was off to Lake Havasu, Ariz., in the morning, where he would meet his 11-year-old son for a weekend of his baseball doubleheaders.

Another ball, another life.

“That’s the good stuff, that’s the reward,” he says.

That head, that ball. Thank goodness for them both. We thank him, and he thanks us, and we walk away from him again. Was that really Andre Agassi?

Yes, yes it was. And again we feel so lucky to have crossed paths and said hello.