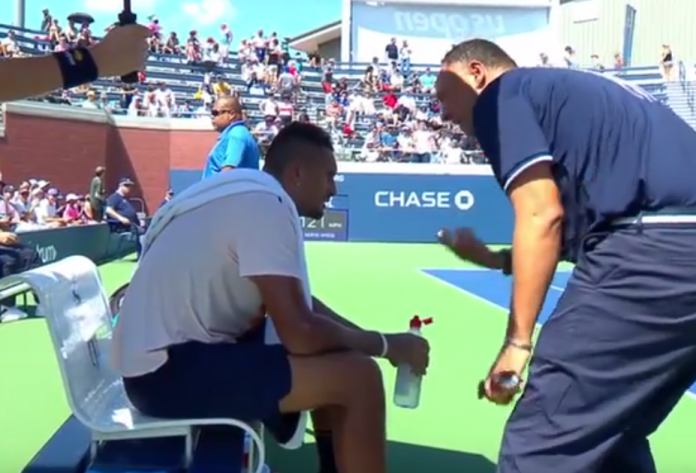 Sometimes things are not quite as complicated as they seem. And today, three bedrock, make-no-mistake-about-it tenets of sports and tennis came into play.

1. Games should be decided by athletes, not umps.

2. In its essence, men’s singles is an individual game. Unlike team sports, where coaches map it all out, unlike boxing, where fighters are advised between rounds, and unlike golf, where caddies serve as a player’s coach, therapist and comforter, the sometimes perplexing beauty of men’s singles in tennis is that – one way or another – the player has to problem-solve and figure it out all on his own. In addition to making myriad tactical decisions, a player has to manage his mind and mood and all the emotional rollercoasters of a match.

3. Roger Federer is a bit of a sage who often gets it right.

Many in tennis now know what happened. At a critical juncture in Nick Kyrgios’ second-round match against Pierre-Hugues Herbert, umpire Mohamed Lahyani left his chair and had a now infamous word with Kyrgios.

Before the tournament, Chris Evert offered more then a few words about tennis’ rebel in residence, the most volatile and perplexing man in the game since John McEnroe or Ilie Nastase. A compelling, free-spirited 23-year-old and man of the people, he broods and boils like few others, has tanked matches from Singapore to Wimbledon and both fascinates and infuriates fans everywhere.

Evert said, “It’s frustrating to watch…[Nick] brings talent to another level, talent that we haven’t seen…But you can’t change DNA. You can’t change the wiring. This change has got to come within himself. He’s going to coast as long as he can, but…[we] are probably wanting this more than he is…I don’t know if he’s happy. He’s a complicated guy…[Maybe] he just doesn’t want to give up a lot…[But] you have to make sacrifices to win Grand Slams…He’s gotten by with not having to work that hard.

Today, there were even more questions than answers. Krygios went down 6-4, 3-0 to Herbert. Nick was mumbling to himself. He didn’t seem to care. Yes, Rod Laver has said Krygios could be the best player in world. But today commentator Cliff Drysdale was incensed. “You just cannot be a professional tennis player in the second round of the US Open and not care about the result, that is not possible.”

Previously, McEnroe asked, “Is there a greater sin in sports than not to use your sublime talent?” Today, Mac said Krygios was on a ledge, that it looked like he wanted to lose. Then umpire Lahyani, who is said to be one of the best in the game, sustained his problematic reputation for intervening in matches. 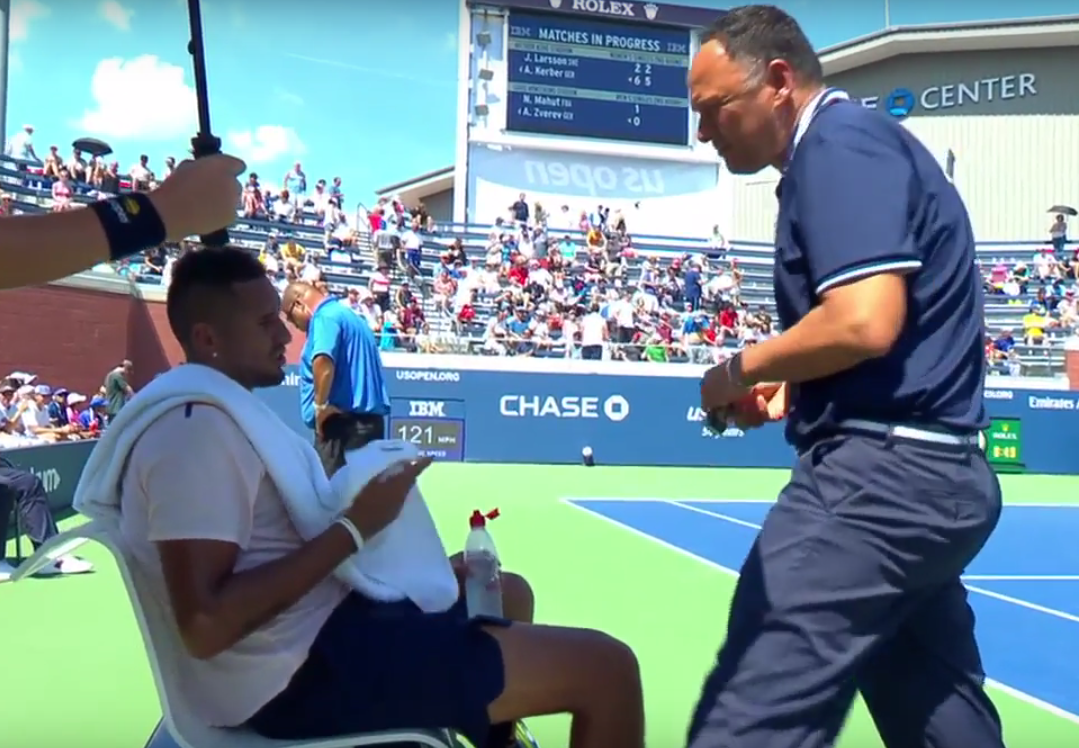 The Moroccan-born Swedish resident once penalized Aussie Brydan Klein for calling himself a “stupid person.” In 2016, he informed Novak Djokovic that he was playing with a broken string, and in 2011, he gave Gael Monfils a pep talk in Valencia, advising him to calm down.

Maybe the guy is just too compassionate, but today he broke all protocol when he got down from the chair and, sounding more like a pal then an ump, said, “I want to help you, I want to help you. I’ve seen your matches; you’re great for tennis. I can see that; I know this is not you.”

Kyrgios said later that it was no big deal. He claimed it didn’t affect anything. In fact, everything changed for one of the streakiest talents in the game. Clearly Lahyani’s soothing, reassuring words calmed the Aussie, enabling him to come out of his paralyzing funk. Kyrgios promptly collected 19 of the next 25 games to win 4-6, 7-6(6), 6-3, 6-0.

Bluntly speaking, Lahyani’s well-intended intervention was an outrage. Herbert joked that he should have gotten the winner’s prize money. But it was no joke when the Frenchman added, “I just saw that Nick from that point started to play really focused, 100 percent…He kicked my ass…You never know what would have happened if Mohamed didn’t go down… He doesn’t need to say the words he said…I don’t think he’s a coach…I think he really cares for Nick…When you’re playing Nick, anything can happen…For sure, I’m going to have a discussion with Mohamed…He overpassed his job…I don’t think in men’s tennis we need coaching.”

Later, Kyrgios claimed it’s happened before in Shanghai and Cincinnati. Others disputed that – but it doesn’t matter.

Even in team sports, officials don’t intervene, except to warn players that they are about to violate rules. Okay, Lahyani didn’t offer tactical advice. Then again a baseball ump would never advise Mike Trout to remember to protect the inside of the plate. Still we can’t imagine a hoops ref telling Lebron, “I want to help you, I want to help you. I’ve seen you, you’re great for the game. I know this is not you.”

The US Open, which has made many good calls this year, claimed that the ump got out of his chair because Court 17 was too loud – not so. They said that Mohamed was just concerned about whether Kyrgios needed medical attention, and that Lahyani simply wanted to tell the Aussie that if his disinterest in the match continued, as an ump, he might take action.

But that’s not what happened. Herbert said the USTA “was taking us for fools. We all hear on the video what the umpire says…I still want explanations. When we players make mistakes on court we are sanctioned.”

Some said Lahyani should be suspended. But Andy Roddick said he was “a good man who genuinely cares about people…I hope they go easy on him.”

Not surprisingly, in the end, Federer seemed to get it right. He said, “It’s not the umpire’s role to go down from the chair. But I get what he was trying to do…I don’t care what he said. It was not just about [asking] how are you feeling?…Conversations can change your mindset…That’s why it won’t happen again. I think everybody knows that.”

In the end, perhaps the moral to the story is rather simple. It’s said that the mountain will not go to Muhammad. And now it’s crystal clear that Mohamed should not have gone down to the court.