BEST PLAYERS TO WIN THE OPEN: Serena and Evert with six titles each; Federer, Connors and Sampras with five titles each.

WHAT IF: USTA President Slew Hester – from his airplane seat – hadn’t spotted the Flushing Meadow site, which inspired him to create the Billie Jean King USTA National Tennis Center? If there hadn’t been a Super Saturday in ’84, and Connors hadn’t made his definitive run to the ’91 semis, both of which took the Open to a whole new, must-see level? If tennis-loving David Dinkins hadn’t been the mayor of New York and the Open was still plagued by invasive jet noise? If the USTA hadn’t hired promoter Arlen Kantarian, with his love of showbiz razzle-dazzle?

BEST POINT: A critical 22-stroke rally on set point that Sampras won over Agassi in the ‘95 final. 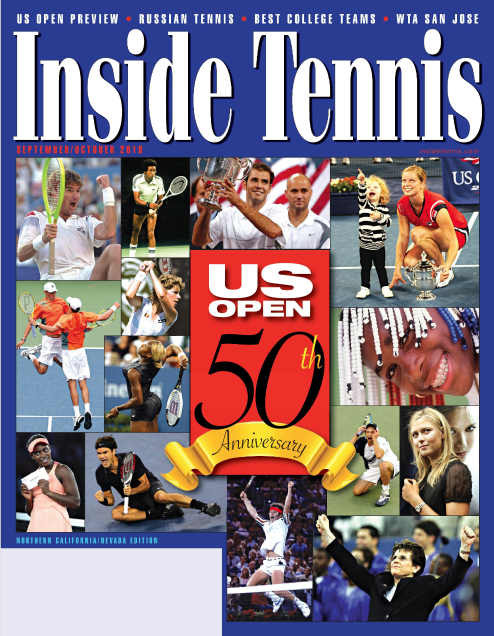 CURIOUS QUESTIONS: Chris Evert asked Sam Stosur, “Does winning the first 19 points clarify it that you got off to a great start?” Fourteen-year-old Martina Hingis was asked, “How long do you plan to play?” After the long-dominant Evert won 6-0, 6-0 in the second round in ’86, she was asked, “Does this result do anything for your confidence?” Arnaud Clement was asked if he’d been “a fun-loving guy since he was an infant.” He responded, “I don’t know, you’ll have to ask my mother.” After upsetting crowd favorite Kim Clijsters, Laura Robson was asked, “Do you feel like the girl who shot Bambi?” The Bryans were asked, “You’ve been America’s team, the world’s team, tennis’s team. Do you ever feel like the world doesn’t win when you don’t win?” Kevin Ware asked, “Is it just me or do Gilles Simon’s legs seem slightly less tooth-picky than in the past?” After Lisa Raymond staged a shock comeback, a reporter asked, “When you were down 0-6, 0-5, 0-30, did you say to yourself, ‘Great, I’ve got her just where I want her?’”

SAY IT ISN’T SO: Federer and Nadal haven’t played at the US Open. South African Nobel Prize winner Bishop Tutu was not allowed to give the invocation during the ceremony to open Ashe Stadium in ’97 because officials feared he would go on too long. USTA President Les Snyder tried to rig the draw in ‘96. Borg and Evonne Goolagong each played in four finals but failed to win.

Ashe Stadium is quite beautiful, but its design is seriously flawed. If day sessions run long, thousands often have to stand outside and wait forever to get into their night session seats. During the ‘85 doubles final, Ken Flach refused to acknowledge that a Henri Leconte volley hit him. In ‘96 Martina Hingis filled the court with drop shots against overmatched and pregnant Tami Whitlinger-Jones. After being upset by Carling Bassett, Hana Mandlikova said the wealthy Canadian “doesn’t really care if she wins or loses. Her father has millions, and she does not have to worry. If she loses, so what?”

Jennifer Capriati was brought to tears in a press conference. James Blake was attacked by a New York policeman. A 22-year-old US Open fan from Salt Lake City was stabbed and killed in a subway station. Linesman Richard Wertheim died of head injuries after being hit by a Stefan Edberg serve.

BEST IDEA: About 15 years ago, USTA board member Mike Mee noted that the US Open netted approximately $80 million a year and probably could be sold for 25 times that, or $2 billion. He added that the USTA could then issue a $4,000 check to each of its 500,000 members.

HAZY CRYSTAL BALLS:
• After an early-round win in ’90, Sampras said, “I don’t think the Open title is winnable for me right now. Let’s be realistic. I don’t play well when there’s a lot of pressure. I just hit a lot of flashy shots.” Pete went on to win the first of his five titles.
• After losing to Sampras early in the ’02 Open, Greg Rusedski said Pete was done and he’d “be surprised if Pete won his next match.” Sampras went on to win the title.
• After Navratilova lost in the ‘88 quarters, Ted Tinling noted that it was “the last glimmer of twilight – I’m afraid Madame has lost her nerve.” Martina would go on to win 29 more tour singles titles and three more Open doubles crowns.

LIKE DEBATING A MIME: Jon Wertheim noted the basic unfairness of players ranting at linespersons who have to sit and take it, and said the one-sided process was “like debating with a mime.”

SHOTS HEARD ‘ROUND THE WORLD: Djokovic blasted an in-your-face, “Take that, Mr. Federer,” crosscourt forehand return of serve in the ‘11 semis to save match point. A sprinting Connors blasted a spectacular one-handed running backhand from off the court that zoomed past the net post and shocked Adriano Panatta in ‘78. Yannick Noah hit a between-the-legs shot with his back to the net in ‘83 that was dubbed “The Virgin Tweener.” When Gabriela Sabatini hit a similar shot, Mary Carillo called it the “The Saba-tweeny.”

BEST MATCH THAT NEVER HAPPENED: CBS was pumping a highly-anticipated ’85 McEnroe-Becker quarterfinal. It would be a rare prime time jewel. But Joakim Nystrom beat Becker and killed the “dream match.” 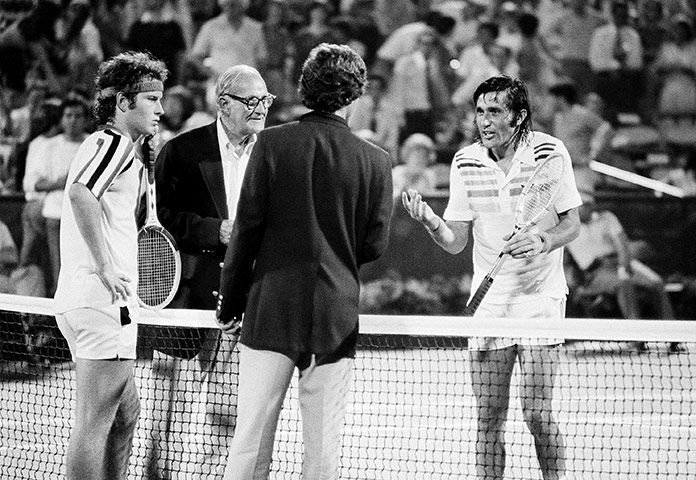 BAD BOY BRAWL: The ‘79 match between a surprisingly angelic McEnroe and Ilie Nastase imploded as fans threw trash and the slow-playing Romanian egged on the crowd. Ump Frank Hammond disqualified Ilie. But the tournament director feared a riot and shamelessly replaced Hammond. Nasty then complained to the new ump, “McEnroe keeps calling me a son of a bitch. Make him call me Mr. Son of a Bitch.”

BEST DAY: Deep into the ‘84 US Open, the tourney had all the makings of a first-class washout. The only item that sparked any genuine attention was Martina’s contention that she could beat the No. 100 man in the world. Then came Super Saturday – a 12:09 marathon of inspired play that remains a tennis day like no other. After a senior match between Stan Smith and John Newcombe, Ivan Lendl beat Pat Cash in a fifth-set tiebreak. Navratilova then edged Evert. Finally, McEnroe and Connors played their best match ever. John won in the fifth, and the buffet of tennis delights drew accolades. Connors said, “The best thing…was that my son came on court and hugged me as if to say, ‘Who cares about tennis, let’s just go home and do what we have to do.’” For years, Super Saturday would be a highlight.

A BLACK-AND-WHITE COMMENTARY: After the ‘01 all-Williams final, 60 Minutes’ Ed Bradley noted, “You’ve got this sport that used to be so lily-white and you have two African-American women playing for the title in Ashe Stadium, and the stadium next door is Louis Armstrong Stadium. That says it all. Arthur Ashe is smiling.”

A-BOMB ATTACK: In ’85, after his first-round loss at the US Open, Kevin Curren said, “They should drop an A-bomb on this place.” NYC mayor Ed Koch countered: “Curren, who lived in South Africa and now lives here…should get down on his hands and knees and thank God he’s here.”

THE MOST DEMORALIZING TENNIS POINT IN THE HISTORY OF HUMANITY: In the ’91 quarters, Paul Haarhuis pinned Connors far behind the baseline, but Jimbo managed to retrieve four Haarhuis overheads before blasting a winner, in a devastating sequence that completely crushed Dutch fans everywhere.

THE BEST LITTLE HAARHUIS IN TENNIS: As No. 115 Paul Haarhuis upset McEnroe in ’89, a fan kept yelling, “C’mon, Whorehouse!”

ASHE TAKES:
• Martina Hingis said the Ashe Stadium was “just the biggest, nicest, most beautiful thing. Just everything is the greatest in America.”
• A US Open security guard said Ashe Stadium “is so good, can’t they have Wimbledon here next year?”
• On the other hand, when Brit Tim Henman was asked what Wimbledon could learn from the new Ashe Stadium, he said, “Nothing.”
• When Ashe Stadium opened, The New York Times said, “New York has not produced [such] an energized public space since Lincoln Center. What we have here is a Lincoln Center for jocks.”
• When a security guard demanded Sampras’ ID, he replied, “I am the ID.”
• Aaron Krickstein had to be the most relieved person in tennis after the Ashe roof went up in ‘16. With no more rain delays, there’ll be no more replays of his epic ’91 fail to Connors.
• In February ‘97, New York Mayor Rudy Giuliani, who never came out to the Open, called Ashe “an absolutely transforming figure” and characterized the move to name the stadium after him as “one of the very best decisions by anyone in sports.” In August, he snubbed the stadium’s opening ceremony.