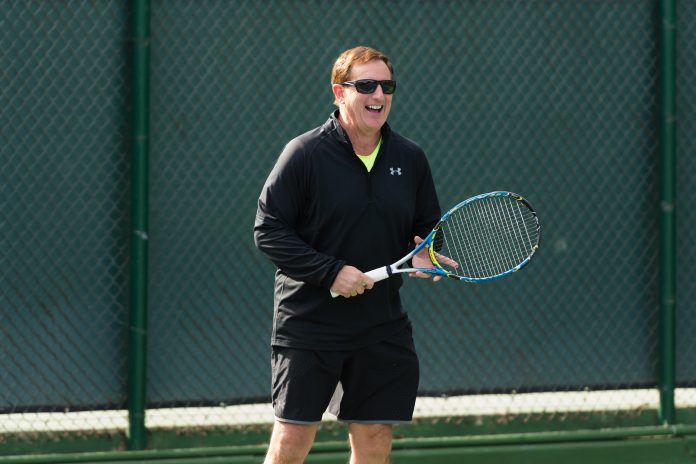 He went to college on a tennis scholarship. Now, one of America’s top executives gives back.

In Economics 101 they tell you that a good businessman finds a problem and then solves it. Mark Hurd is not a “good” businessman. He’s a fabulous businessman.

The former CEO of Hewlett-Packard was brought in by Larry Ellison to run the company. Now he’s found a hefty tennis problem and is solving it.

A former tennis standout at his beloved Baylor University, Hurd saw that college tennis was wavering, and young Americans were struggling to break through on the pro circuit. So he circled Oracle’s wagons. Soon the innovative software, platform, infrastructure and data firm launched a series of game-changing initiatives to boost college tennis and help young US pros. What emerged were the Oracle Challenger Series, the Oracle Collegiate Challenge at the Indian Wells Tennis Garden, an investment in digital scouting reports for tennis, payments of $100,000 apiece to help aspiring Americans break into the pros, and extensive support of the Intercollegiate Tennis Association. Not since Virginia Slims helped create the WTA has a US company done so much to boost American tennis.

INSIDE TENNIS: There’s a certain dynamic to college tennis. The outcome of matches can all rest on some kid, say the No. 5 player on the team, who is out on some back court. Then everyone on both teams gathers around – hovering and hoping.

MARK HURD: It’s unlike anything else in the sport. Last year I was in Waco for the Baylor-Oklahoma match. More than 1,500 people were there. The only difference from your description was that there were no back courts, You could see almost every match. The match came down to 3-all and the No. 5 match was the decider. It was almost precisely as you described.

There were people who didn’t realize that when a player tosses the ball or is about to hit a shot, you’re not supposed to scream. There’s a lot of debate about whether this is good for collegiate tennis. I think the energy it’s brought has been fantastic. It’s not perfect, but it’s just so raw. There’s so much passion and energy. It’s not just a tennis match – it’s rowdy and exciting. It’s intense. Not everybody who does well in a traditional tournament flourishes in those environments. The kids who do handle pressure well go on and thrive.

MH: At a Baylor-Oklahoma match about four or five years ago, there were about 2,000 fans. Andy Roddick was there, and I told him, “I’ve never seen anything like this.”

IT: I think it’s fabulous.

MH: I do too – it’s fabulous. It’s not for everybody – I get it. If you’re a traditionalist, it’s not for you. But it’s great if you’re looking for more energy, enthusiasm and excitement, and if you want to create more participation.

People are rooting for the brand and the shirt. Most of the people don’t know the player or whether he came from LA or from the circuit. All they know is that the player has a Baylor shirt on. The college game attracts a broader set of people who learn about the sport. It’s a big positive.

IT: You have this incredible program where you award $100,000 each year to an aspiring young American man and woman player.

MH: Last year we gave the awards to a young man from UCLA, Mackie MacDonald, and a woman from Virginia, Danielle Collins. They both had stayed in their great schools and were only about No. 250 in their rankings. Now Mackie is No. 143 and Danielle is No. 93 [and getting much higher].

IT: One-hundred thousand dollars is a lot of money to give to a young person. Will it pay off?

MH: Time will tell. Certainly I’m proud of both of them and the way they’ve gone about the last year. They’ve both improved tremendously.

IT: What went through your mind when Mackie MacDonald got a 6-0 set off of the ATP Championships winner Grigor Dimitrov?

IT: He’s amazing – so centered and calm.

MH: He’s just a well-deserving kid. When you’re a college player, basically everything from travel plans to your laundry is taken care of. Then, when you go out on tour, there’s nothing. You have to do everything, find everything.

IT: When I asked Danielle Collins about getting the funding, she was so appreciative. She used the money for coaching, physios and to help her gain mental toughness. Before, it was hard. She told a harrowing story of having to take a dicey Greyhound from Tampa to Miami. It wasn’t pretty.

MH: As a result of her play in the Oracle Challenger she got into the BNP Paribas Open, where she beat Madison Keys. [Note: In Miami, Collins beat Coco Vandeweghe and Venus Williams to reach the semis.]

IT: So, talk about the magic of college tennis –

MH: You get exposure to fantastic coaching, fantastic facilities, great competition, and the chance to have an education. All that’s wrapped with a bow. Plus, you have the support of an incredible infrastructure.

Tennis is one of the most rigorous college sports because it’s an all-year sport. You’re playing in the fall and the spring, and in the spring you’re traveling. You get to play roughly 30 matches a year. You travel quite a bit, and you have to learn to be disciplined, all of which serve you well.

IT: John Isner always says that he felt more pressure playing for his Georgia Bulldogs than at Wimbledon.

IT: Is college tennis a good training ground for aspiring pros or –

MH: College is becoming more and more of a development ground for pros. Now you’re seeing pro careers lengthen, so players can spend some time in college. You can’t just hop on court and become top 20. You’re almost silly if you turn pro to go on the Futures circuit. It’s almost a crazy strategy – it’s so difficult. You can win a Future and win less than you spent to play the tournament. It’s a tough lifestyle.

IT:   Do you think it was a boost that a former college player, Kevin Anderson, reached the US Open final?

MH: He upset great players. He had a great college career at Illinois. He’s developed, like Isner and Steve Johnson. They’re out there competing. College tennis doesn’t just develop great tennis players that we see on the tour, it develops great young people – and we have been able to hire many of them.

IT: A lot of college players seem to become entrepreneurs.

MH: These kids have generally been good people who’ve made great contributions.

IT: We know Billie Jean King says, “Pressure is a privilege.” If you have to get your second serve in on match point with your buddies looking on, that’s a lot of pressure for a 20-year-old.

Let me do a quick lightning round. Start with John McEnroe –

MH: I give John incredible thanks for all he’s done to keep tennis relevant. He’s worked really hard and he’s one of the most insightful commentators in the sport. With John, there’s never a dull moment.

MH: Hard to argue that he isn’t the most successful college tennis coach since Dick Gould.

IT: The word bear.

MH: I think of the mascot of a fantastic university.

MH: Probably the greatest junior tennis player in the history of the sport.

MH: One of the most thoughtful gentlemen I’ve encountered in college tennis.