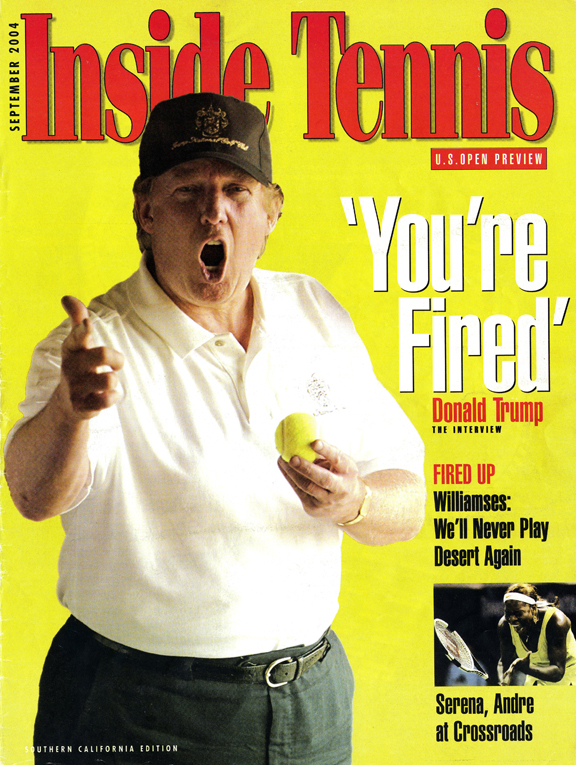 Years ago, when Donald Trump peered down from his US Open suite, heads turned. Sports Illustrated’s S.L. Price noted that the tournament was “all about Donald Trump.”

These days the connection between tennis and the Presidential candidates isn’t all about Donald Trump—it just seems that way. After all, Rick Santorum, the runner-up in the 2012 Republican primaries, is a fine player and the brother of Dan Santorum, the respected head of the PTR and a longtime USTA volunteer. Years ago, Hillary Clinton won a mixed doubles tournament. Rick Perry has crossed paths with his fellow Austin celeb Andy Roddick a number of times.

Jeb Bush may well be the best player among the candidates. As a longhaired Longhorn, he was told by the University of Texas tennis coach that if he cut his hair he’d make the cut and be on the team. He did, but eventually lost his place on the squad when South African Kevin Curren—who went on to reach the 1985 Wimbledon final—came to play for Texas. As Florida’s governor, Bush collaborated with an important USTA initiative, and yes, he has a legendary overhead. He once teamed with his brother Marvin to beat a stunned Chris Evert and Pam Shriver at the Hart Senate Building court. George Bush Sr. was elated, while Evert admitted, “We foolishly took the challenge lightly … Nobody told me these Bushes play tennis.” Shriver wanted a rematch. But the Bushes, who usually are all about second terms, said there would be no revival this time.

Still, all these connections pale before the tennis résumé “The Donald” boasts. At the University of Pennsylvania, he played tennis and squash. He owns a tennis club, and many of his coast-to-coast golf clubs have courts. He owns the Grand Hyatt, the USTA’s US Open headquarters, and his suite at the US Open is a ground zero for the Open’s yuppie (“My Chardonnay’s a tad too oaky”) action. Until a few years ago—when he began getting booed whenever he was pictured on Diamond Vision—Donald was often seen standing in his suite peering down on the action with a certain “I’m Trump and you’re not” air. He’s appeared at many pro-ams, and of course has hobnobbed with numerous tennis stars, including Evert, Serena Williams and Gabriela Sabatini.

In 2004, Trump did a lengthy interview with me at his Trump National Golf Course atop the cliffs of Rancho Las Verdes south of LA. Said to be the most expensive golf course ever built, it was recently set to host the 2015 PGA Grand Slam of Golf, but the PGA withdrew after Trump’s comments on immigrants. Long before these events, Donald and I walked the course and then chatted over clam chowder. The conversation was crowded with many of the Trumpian traits: feel-good charm, snappy brilliance, curious contradictions, and ample macho bombast.

Our chat began with an endearing charm offensive. He told a nearby friend, “This guy’s got a great magazine. I read it all the time.” A bunch of whiplash interruptions and dazzling non-sequiturs quickly followed.

But Donald wasn’t interested. He broke in and asked, “How does your magazine compare with Tennis magazine? What’s the difference?”

INSIDE TENNIS: So, let’s turn our attention to that avid tennis player we all love so much, Albert Einstein.

IT: Your book quotes him as saying, “Imagination is more important than knowledge.”

DT: There’s nothing like imagination. Now you have to know how to use it … A better statement would be that imagination you know what [to] do with [is better than knowledge].

Trump did offer many an opinion on tennis. He said Billie Jean King was “a great woman,” even though he “was a victim of watching Bobby Riggs get his ass kicked [when she produced] one of the greatest performances I’ve ever seen under pressure.”

Donald said he was “a big believer in the [notion of the] woman behind the man and the man behind the woman,” and that Andre Agassi and Steffi Graf were “one of the greatest examples of a relationship” he’d ever seen. As for John McEnroe, Trump referred to his fellow bigger-than-life New Yorker as a “good friend of mine … He’s a very smart, savvy guy.”

But the macho man, who has married two Eastern European beauties and runs assorted beauty contests, clearly was enchanted by then-17-year-old Maria Sharapova, who had just beaten Serena to win Wimbledon. Almost as if Maria were a racehorse, he unashamedly said her “gait is magnificent,” adding, “And those shoulders. You don’t often say ‘Gee, she has beautiful shoulders,’ but her shoulders are … She’s beautiful. But I would say that maybe Sabatini was the most beautiful.”

The billionaire added that Sharapova should have consulted with him, because he could get her “the right management” to handle her money. Ironically, Maria soon proved to be perhaps the best businesswoman in sports history. Trump went on to offer one of the most inventive match analyses we’ve heard. “Do you think,” he asked, “that Maria’s beauty intimidated Serena? I think [Serena] looked across the court and said, ‘I’m playing against a supermodel.’ I think it had an impact.”

Next, the Donald said, “I’ve never seen anyone go at a ball like that. She was hitting winners and hitting harder than Serena.”

Trump continued, “Tell me, I didn’t watch the match, I only heard—did Sharapova just dominate?”

But wait, Donald, you just broke down a match you didn’t see. Oh, never mind.

In any case, our nation’s most prominent narcissist on steroids informed us that the US Open’s Ashe Stadium is “a great stadium with great sight lines. Of course, that’s easy for me to say, ’cause I’ve got the best box in the stadium.”

Some may dismiss the billionaire showman as a loud buffoon, but he’s singlehandedly re-tooled American politics and culture. When we spoke, I pushed the envelope. I said, “Some view you as kind of a surface guy, but your book … has a lot of interesting stuff in it. You quote Carl Jung, who wrote, ‘He who looks outside his own heart dreams, but he who looks inside his own heart awakens.'”

Trump replied, “That’s good. But who says I’m surface? I haven’t heard that.”

“I think there’s a stereotype of rich people that’s dismissive,” I replied.

“Could be,” Trump quipped.

Then it was time to play my Lincoln card. I noted that the fabled leader once said, “If you want to test a man’s character, give him power,” and then I asked, “Has that been a problem for you?

Donald wondered, “What does that mean?”

“It means that anyone can deal with problems,” I replied. “But when you give someone power, that’s when—”

Whether Trump crashes and burns or is triumphant, it’s clear this man is one provocative fellow. Ivan Lendl dismissed the young Andre Agassi as just “a haircut and a forehand.” Clearly Trump is more than a haircut and a portfolio. He’s got an undeniable presence. So we had to ask him about the role of aura in business and sports.

“Aura is the whole thing,” he insisted. “Perception is an amazing word. If the perception is there … But it doesn’t always work. The perception was that Serena couldn’t be beaten, but she got her ass kicked [in the 2004 Wimbledon final] … You still have to produce the goods. But perception and aura are very important. I gotta go.”