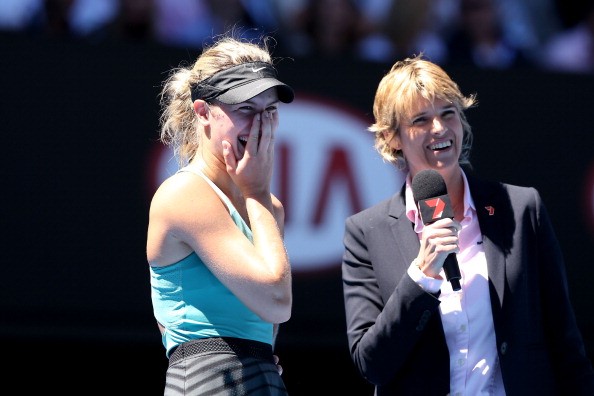 FIRST DRY THE DISHES, DEAR, AND THEN YOU CAN CHANGE THE WORLD: The passing of Billie Jean King’s mother, the 91-year old Betty Moffitt, brings to mind BJK’s comment to IT: “I was seven when I told my mother I was going to do something great with my life. She said, ‘Dry the dishes and let’s go—you’ve got homework to do.'”

BOO BIRDS: The Aussie Open crowd howled with derision when Genie Bouchard said Justin Bieber was the celebrity she most wanted to meet. They also booed the injured Rafa Nadal during the men’s final … When only one lackluster match was played on the final day of the Spain vs. Germany Davis Cup tie, 5,000 Germans offered loud Bronx cheers to their team.

• A writer asked Davis Cup captain Jim Courier, “Great Britain hasn’t beaten you on American soil in over 100 years, since 1903. How does it feel to be part of the team that fell short?”

• Dominika Cibulkova, 5’3″, was asked, “Can you now validate that good things come in small boxes?”

• Before the Fed Cup, captain Mary Joe Fernandez was asked, “The Australian Open was famously hot this year. On-court temperature was 115 sometimes … Here in Cleveland, it’s extremely cold. Unfortunately, you won’t be playing outside … Is there any chance that this outside weather affects your game at all? Is it a psychological thing coming from the hot to the cold?” Mary Joe replied, “If we were playing outside, there would be a bit of an adjustment.”

GRRRRR! The post-Roddick season of our discontent continues— America’s top men’s prospect, John Isner, pulled out of his first-round Australian Open match, and for the fifth Slam in a row, no American guy reached the fourth round. In the last seven Slams, seven different American men have been the last American standing. This time it was Donald Young. Then, to make matters worse, Young and his US Davis Cup teammates lost their first-round tie to Britain, plus our promising women’s corps only had a modest run in Melbourne and fell in the first round of the Fed Cup to Italy. For the first time ever, the US lost Davis and Fed Cups ties in back-to-back weekends. And they were first-round drubbings, no less.

AND NOW TO THE RESCUE: The diminutive US junior Stefan Kozlov, 15, reached the AO junior finals.

DON’T LET TENNIS’ ONGOING DEBATE GET YOUR GOAT: Who is the greatest player of all-time? Yes, Fed has 17 majors, was No. 1 for a record 302 weeks, reached 23 straight Slam semis and has the record for most Slam quarterfinals. But Nadal has 13 majors, a 23-10 overall record over Roger, including an astounding 9-2 margin in Slams (Roger hasn’t beaten Nadal in a major since ’07), and Rafa has five wins in a row. Plus, he has a glittering Davis Cup record and an Olympic singles Gold medal. Still, Roger was absolutely dominant for years, is beautiful and beloved, and it will take a lot to dislodge him from his most dazzling title: the Greatest of All-Time.

JAY’S HIGHS AND LOWS: Jay Leno leaving The Tonight Show brings to mind the time when Michelle Obama was on his show—she said the President beats her quite often in tennis, and “that gets to be pretty annoying.” Poor Jay also has had a low tennis moment: When David Letterman asked Pete Sampras what made him ill against Alex Corretja in their infamous quarterfinal at the ‘96 US Open, Pete claimed, “I watched Jay Leno the night before.”

HOW COULD THIS BE? Stan Wawrinka’s daughter, Alexia, doesn’t want her Dad to win. She’d rather have him lose so he can come home.

FOOTBALL AND FOREHANDS: During the Super Bowl, Serena Williams, a part owner of the Miami Dolphins, tweeted, “Just turned TV off … Good night. Good riddance … And goodbye Super Bowl until next year” … After Denver’s loss, Ben Rothenberg wondered, “What would it be like if Peyton [Manning] had to give a speech on the field right now? What tennis players [who lose in finals] do in lowest moments is unparalleled” … Both Colin Kaepernick and Nadal have problems getting the ball in play in time.

LUGE-ING OUR MINDS: Tennis tournaments often turn to “lucky losers” to fill gaps in their draws. If there were such a system for luge at the Olympics, we could call them  “lucky loser lugers.”

THE DISTRACTIONS OF RAFA NADAL: Nadal, who loves soccer and fishing, is a great golfer and a champion poker player. In Melbourne, he was spotted playing blackjack at the Crown Casino. BTW: Years ago, when the Chilean Marcello Rios was on the tour, word was that he had to reach the Aussie Open final just to pay off his Crown Casino debt.

FREE FALLS: Six Davis Cup powers fell in the first round: the US, Spain, Serbia, Argentina, Australia, and Canada. The US will know in April who we play in the Davis Cup relegation match this September.

STORMY FED CUP WEATHER: “Good on ya,” Australia—one of your Fed Cup players is named Storm Sanders. Not to be outdone, America’s Tornado Alicia Black, 15, and Hurricane Tyra Black, 12, took part in the USTA’s Fed Cup Player Development camp in Cleveland in February.

RULE CHANGE? If you fail to hit a ball on your serve because your toss is errant, shouldn’t that be a fault? Worst offender: Patrick “Sorry, Mate” Rafter.

27-2: Nadal and Djokovic’s combined record against Stan Wawrinka, going into the Aussie Open.