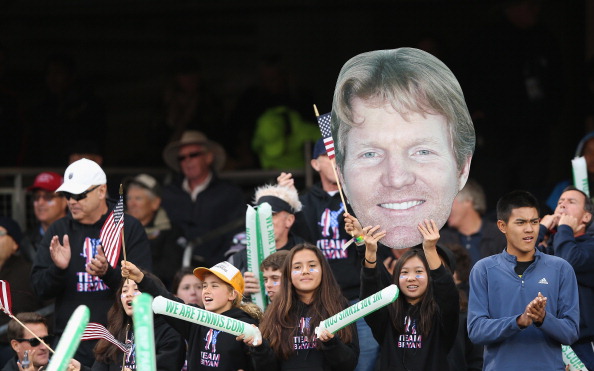 It was a sunshine, feel-good party which—these days in American men’s tennis—can only be thrown by the Bryan family clan. When it comes to that subject of late, the words gloom and doom come to mind.

Forget all that. On this bright Chamber of Commerce Saturday, American tennis had a good old fun fest. Flag-toting patriots in Colonial gear circled the stadium waving Old Glory. Giddy girls in tennis dresses with American flags painted under their eyes squealed in delight. Eight-year-old boys feasted on blue cotton candy. Thoughts of yesterday’s tennis blues, when the US got drubbed unkindly by Brits Andy Murray and Jamie Ward, were just a fading, rather inconvenient, afterthought. Alas, denial is such a sweet balm.

After all, the bouncing, bombing Bryans—Bob and Mike—were on court, doing what they had done 20 times before in Davis Cup play. They were taking it—with beauty, finesse, and their singular twitchy energy—to their overmatched foes.

Playing in tandem, flicking backhand returns, and serving with power, offering touch drop shots and deft lobs while generally making their foes look like pikers, these were the beautiful bounding brothers in full flight. Don’t you dare mention that these guys are 36. Today, they were eager to make good after a pair of shocking back-to-back Davis Cup doubles defeats to Brazil and Serbia, and a surprise upset loss in the Aussie Open. Bob confided, “We were kind of coming out of our shoes. Really itching to get on the court.”

Sure, Bob was broken in the third set by the modest British duo of Colin Fleming (who has won just one ATP singles match and whose highest ranking was No. 359) and Dominic Inglot (a University of Virginia product who has never won an ATP singles match, is ranked 950, and was playing his first Davis Cup for the first time). But the loss of serve hardly phased the Bryans, who stormed back with ease, breaking twice in the fourth set of a battle in which the result never seemed in doubt.

No wonder fans and promoters let loose. A brass band blared. Major league amps pumped out a string of pop faves. The Netheads cheer group bowed deep to give homage tto he Bryans’ benign brilliance. After one devastating Bryan winner, a not-so-generous fan called out, “Welcome to San Diego.” One historically minded viewer yelled “1776!” to remind the Brits of our best-ever victory over them. Another voice—rather hostile, quite political—shouted, “We are allies, but we don’t like you.”

Okay, that was mean. But today was a high-octane fun fest. All was jolly, thousands were beaming.

Of course,  there’s nothing worse than to rain on someone’s parade. Still, beneath the gaiety of the moment, there was a certain “last hurrah” reality. No, today’s “love-in” wasn’t like some swinger letting loose for a last time at his bachelor’s party, just before getting hitched. And neither was it—and excuse our gallows references—like a convict getting his last meal of choice before his execution.

Still, even with the Bryans’ win, the US is down 2-1 to Great Britain, and only an improbable sweep of tomorrow’s two matches can save us from a humbling day. Okay, we haven’t lost to the Brits in 77 years. For the time being, we can take some small comfort from the fact that Sam Querrey has a win over the defending Wimbledon and Olympic champion Andy Murray. As for Donald Young, ranked No. 79:, he may have gotten thumped by Murray in the opening round, but his ranking is 96 points better than his probable foe, Jamie Ward, No. 175.

A first-round defeat to the Brits would be a devastating marker—a body blow for American men’s tennis, which is already wobbling and weak.

So, despite the levity of the day, as the post-match press conference was winding down, Inside Tennis dared to face—God forbid—the reality that American men’s tennis is, shall we say, in a world of hurt. Our question went like this: “Today was wonderful, a feel‑good day. Congratulations, guys. But let’s face it, there are some problems.  John [Isner, ranked No. 13] is struggling early in the year; Sam [Querrey] is at No. 49,; Donald [Young] is No. 79; Ryan [Harrison] and Jack [Sock] have yet to really kick in. What can we do to really get American tennis fired up and happy?”

America’s Davis Cup captain, Jim Courier, is a knowing analyst and sage savant. Getting right to the heart of the matter, he looked at us with a very somber expression and said, “More magazine sales, more interest. Do your job, Bill.”

Never mind, that Courier, whose team is on the brink, oh-so-adeptly swept the question of the day under a considerable rug. Instead, we thought back to another of his recent claims: “You shouldn’t put the words rational and tennis player in the same sentence.” And with that in mind, we offered a humble one word reply: “Touche.”

THE BUZZ: NOTES FROM LEFT FIELD (AT PETCO PARK)

YOU KNOW YOU ARE IN A SAN DIEGO SUBURB WHEN… the roadside sign says “Try Polo.”

YOU KNOW YOU ARE AT A BRITAIN VS. US DAVIS CUP MATCH WHEN… a thirtysomething fan with designer sunglasses and a massive British accent, wearing a jacket that reads “Hong Kong Rugby Services” and sipping a nice—slightly oaky—Chardonnay out of a San Diego Padres plastic glass, turns to his proper girlfriend and says, “Darling, I think I’ll watch the Super Bowl tomorrow.”

IS THIS A SOUND BITE OR A SOUNDBITE? Britain’s Captain, Leon Smith, reflecting on the Brits’ great position going into the last day of play, said that if he’d known the result ahead of time, he “would have bitten [his] hand off.”

SO MUCH FOR STIFF BRITS: You thought the English were all about formality. Think again. Jim Courier wore a suit and tie (estimated cost of his ensemble: $2,000), while Britain’s Captain, Leon Smith, wore shorts and tennis gear (estimated cost: $400).

FULL CIRCLE: In 1990, young Bob and Mike Bryan were turned on to tennis by a caring American doubles player, Ricky Leach, during a Davis Cup tie against Mexico at the La Costa Resort, north of San Diego. Twenty-four years later, they are back in San Diego, now as our beloved stars.

JUST WONDERING: Putting a tennis court in the outfield of a baseball stadium has been an inventive hit. So why not do it in AT&T Park in San Francisco, or for that matter, in Yankee Stadium, Fenway Park, or Wrigley Field? … When, and if, the tennis from San Diego goes up against the Super Bowl, will anyone be watching the Davis Cup tie?

THOUGHTS ON COLIN FLEMING AND DOMINIC INGLOT: The old TV classic The Lone Ranger asked the question, “Who  was that masked man, anyway?” Today, many an American Davis Cup fan took a look at Britain’s Davis Cup doubles team and asked, “Who are these guys anyway.” BTW: In the last Davis Cup tie we played, the hero was the little known Serbian Ilija Bozoljac, ranked 268.

BRYAN BROTHERS AXIOM OF THE DAY: The doubles team that twitches together wins together.

GOOD-LOOKING EXCEPTIONS TO THE BRITISH RULE: Many Davis Cup teams have their groupies. We have the Netheads. The Aussies have their Fanatics, and a certain cadre of gorgeous young ladies likes to take in British Davis Cup ties. An Englishman explained: “Most British fans are of a certain age. We call them ‘The Bats,’ and these are the exceptions.”

GOOD LUCK UMP: Cedric Molina, the Spanish ump in the chair when the Bryans won their Olympic Gold, was also in the chair during their win today.

MOST VERSATILE FOLKS: How about the Davis Cup groundskeepers, who are used to lugging tarps and grooming infields, but of late have been adeptly tending the fine clay court in left-field?

SMALL MESSAGE, BIG MESSENGER: Tiny tennis tweets were posted throughout the day on the most massive scoreboard in tennis history. Our favorites: a picture of Roger Federer and Stan Wawrinka cheering gleefully on the Swiss bench as their nation’s doubles team swept to victory; a tweet from the USTA’s Tim Curry which congratulated rising American junior Stefan Kozlov on turning 16. Curry claimed he had shoes in his closet that were older than the promising prospect.

ANOTHER DAY, ANOTHER COURIER: On Friday, one British writer claimed that Jim Courier, as always decked out in a suit, looked like a banker. On Saturday, when Courier added a pair of designer sunglasses, the writer said he looked like a CIA agent.

THE BRYANS “ALWAYS ASK A QUESTION”: We asked Britain’s Davis Cup team why the Bryan brothers are so good. Dominic Inglot said, “They just take it to you every single time. They always ask a question of you, and they’re never going to give you any free points. They’re always going to put it in the court on the big points, and always going to make you play.

[With other teams] there are a lot of times you can get away with some cheap points. With those guys, you’re not going to get that. They make you play. They return well [also]. With the serve, you can kind of get caught up in the whirlwind of [their] speed sometimes, and it’s hard to settle down. They feed off of the environment and the crowd.”

Colin Fleming added, “One thing stands out with the Bryans, I’ve only ever really experienced it against them, and that’s the feeling that the match can rush away from you. When [you] get behind in sets, it can become a blur against them. Even when it’s not their home crowd. I played them at Wimbledon one time, [and] still it was like a flash before our eyes. They have big games, and that’s something that’s unique to them.”