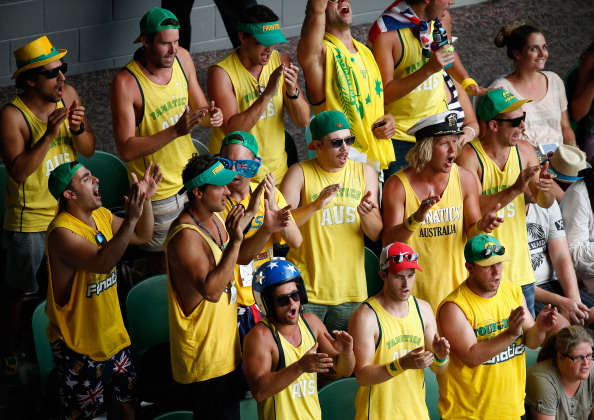 One plaintive lady, high in Rod Laver Arena, cries out “Come on, Lleyton! You can do it!” Another fan, near the rafters above the baseline, toots a scratchy kazoo to excite passion.

But it is the famed Aussie Fanatics who rock Rod Laver Arena. Just imagine Duke’s Cameron Crazies, add a splash of the Seattle Seahawks’ 12th man intensity, and a bit of the zany-but-lovable, Stanford band, and voila, you get some sense of the Fanatics.

One Fanatic sports an Australian flag as a kind of warrior cape. Another prefers a dorky motorcycle helmet like Jack Nicholson’s in the movie Easy Rider. Then there are the zany sunglasses and green masks—anything goes. Gareth Fletcher from the northern Gold Coast sports an Admiral’s cap and leads the troops.

The Fanatics are part of a vast network of Aussie fans who party hard  and travel far, to the World Cup in South Africa, cricket matches in India, Germany’s Octoberfest, and the running of the bulls in Spain. Aussie ex-pats enliven Wimbledon and the US Open.

On this steamy Melbourne day, it is the cheers of the benign but slightly nutty Aussies which draw attention. Incredibly loud, then suddenly whispery-soft, they offer one rhythmic chant after another, complete with concert-worthy harmonies, studied crescendos, and inventive hand movements, refined over years of practice. Famed mime Marcel Marceau would offer a gesture of approval.

Some of the Fanatics’ offerings are delightful sing-song ditties featuring but a phrase or two. Others offer simple enough messages: “Aussie, Aussie, Aussie!” or “Let’s go, Rusty! Let’s go!”
There are inventive variations of well-known songs like “Hey Jude,” and the anthem that requests, “If you’re an Aussie and you know it, and you really want to show it, if you’re Aussie and you know it, clap your hands.”

After Lleyton Hewitt scores a mighty winner, the Fanatics call out, “Too big, too strong!” or the staccato “Boom, boom, shake the room!”

This one was our fave:

But Hewitt’s wonderland was a dreary desert. Never mind that he’s an idol playing his 18th Aussie Open, that he’d recently scored shock wins over Andy Murray and Roger Federer, and that he’s widely considered one of the best battlers ever. And forget that he battled back from two sets down to tie the record for the most five-set matches played in the Open era.

Yes, Hewitt told Inside Tennis that it helps to hear the Fanatics, that they make Davis Cup and all the Australian tournaments more fun.But ultimately, in his first round match, all the Fanaticism in Melbourne was not enough. After all, savvy shots, not nifty songs, are what matter in this game. And in the longest contest (four hours and 12 minutes) so far at this year’s Aussie Open, Hewitt squandered a match point, played error-strewn tennis at crunch time, and was handcuffed by three big serves, falling to No. 24 Andreas Seppi of Italy  7-6, 6-3, 5-7,5-7, 7-5.

All of which is to say, on this sad day, if you were an Aussie and you knew it, you had to be a bit under a cloud—especially if you were a tireless fanatic.

DOES GOD SWEAT? A listener emailed AO Radio to ask, “Do you know if Federer sweated today?”

DIALOGUE OF THE DAY: When Todd Woodbridge asked Federer how his new part-time coach Stefan Edberg was doing, Roger said, “He warmed me up.” “How’s he hitting?” asked Woodbridge. Roger succinctly reported, “I won.”

TOUGH LOVE: Federer said that the  Rod Laver Arena roof should not be shut, no matter how hot it gets.

THE NEAR-ARRIVAL OF A THIRD WILLIAMS: Writer Ubaldo Scanagatta long ago claimed that tennis dearly needed was a third Williams in a addition to Venus and Serena. The recently-married Rhyne Williams, a product of the University of Tennessee, is still well outside the top 100, and far from being a household name. But when the 22-year old took a convincing set off of No. 5 Juan Martin del Potro, he suggested that eventually there just might be a third Williams of note in America’s tennis conversation.

LITERARY INSIGHT OF THE DAY: British commentator Chris Bowers said Andreas Seppi, who has a Germanic first name and Italian last name, was like something out of the novels of Thomas Mann, who famously explored the mixed heritages of his intriguing characters.

WHEN WINNING TURNS OUT TO BE A LOSING FORMULA: John Isner played the warm-up tournament in Auckland because he wanted to go into the Aussie Open with plenty of match experience. He made it through a series of close matches, eventually winning the tournament.  But—wouldn’t you know it—the massive man, with many a hefty moving part, began compensating for an injured knee. Then one ankle began to hurt, at which point he thought, “Oh s—.” After retiring against Martin Klizan in the first round, Isner likened his time Down Under this year to “swimming upstream.”
Isner withdrew from last year’s Aussie Open, and he’s had health problems in three of his last five Slams. Still, America’s greatest male hope feels his ankle and shin problems—which he has difficulty describing—aren’t structural and won’t be long-lasting. He’s confident he’ll be on hand to lead the US in our Davis Cup tie against Britain in San Diego later this month.

YET ANOTHER KIND OF TENNIS MELTDOWN: When Caroline Wozniacki put her water bottle down on the court, it began to melt.

THE NOT SO “DUCK-WORTHY” WORDPLAY THAT REALLY QUACKED: An Australian Open broadcaster revealed that his bet on Aussie James Duckworth was for $2.50 because “that’s how much a duck is worth.”

HOW HOT WAS IT WHEN YOU WALKED OUT ON COURT? John Isner said, “It was like when you open an oven and the potatoes are done.”

VIVE LA DIFFERENCE: When Caroline Wozniacki won her first-round match in temperatures over 100, it was four degrees in her Danish hometown of Odense … There was a 27-year differential between rising Swiss teen star Belinda Bencic and Japan’s super-elder Kimiko Date-Krumm, who’s 43. A Sydney Herald headline claimed, “They Could Have Been Mother and Daughter.”

HOTTEST CONSPIRACY THEORY OF THE DAY: Lore has it that an egg was once fried on one of the Australian Open’s old, intensely hot, rubberized courts. But conspiracy theorists suggest the egg was somehow fried beforehand.

HIGH POINT: The temperature topped out at 108 degrees, and the local tram tracks warped in the heat.

“HE WAS REALLY SWEET”—SLOANE STEPHENS REMEMBERS HENRY TALBERT: After her first-round victory over Kazakhstan’s Yaroslava Shvedova, Inside Tennis asked LA’s Sloane Stephens to reflect on the recent passing of Henry Talbert, the longtime Executive Director of the Southern California Tennis Association. The world’s No. 12 player said Talbert “was always so nice to me. I always used to see him at UCLA. He used to come up [and ask], ‘So how is your day going?’ He was so nice and friendly. I’ll miss seeing him at UCLA. [He was a] great guy. Obviously he’s done a lot for the game, so he’ll definitely be missed. He was really sweet.”