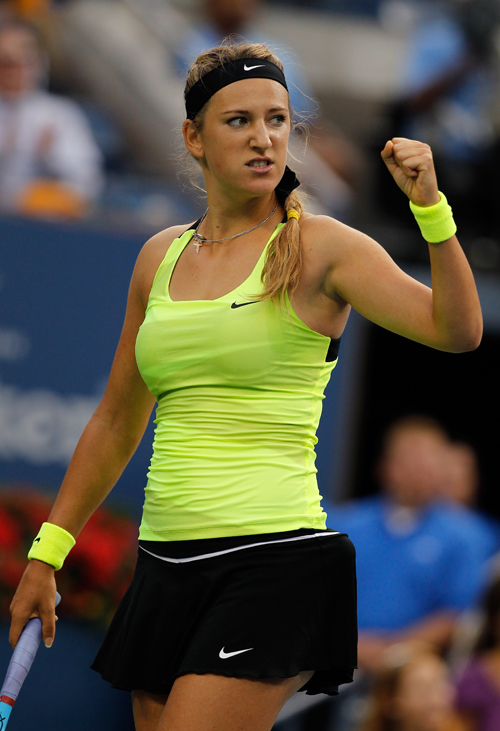 She may have lost to Serena, but there's a lot to like about Vika.

CAN WE LEARN TO LOVE VIKA: Australian Open champ Victoria Azarenka went on to win the BNP Paribas Open. She had a 26-match winning streak and brought home a couple of medals from the Olympics. Her well-practiced post-match dance is rather a delight. Her out-of-Belarus backstory is appealing. But her power game has a ferocity and intensity which isn’t exactly cuddly, and her nonstop shriek is more than off-putting and less than entertaining. All this begs the question: what will it take for the public to warm up to the evolving young blonde, who just happens to be No.1 in the world?

AND NOW FOR A WORD FROM TWO OF THE WORLD’S TWO LEADING “GRUNTOLOGISTS”: When it comes to grunting, Mary Carillo said the WTA “consulted gruntists and gruntologists … A lot of this is screeching and barking. I do not know what Azarenka does …You’ve got to do something about this.” Noting Carillo’s desire for an intervention, John McEnroe said, “So I have permission to give them a time out … You’re a Democrat, you believe in government?” Carillo added that Wimbledon gets more mail about grunting than anything else, saying, “It affects the game.”

THE END OF THE ROAD FOR ROGER AND RAFA? Filip Bondy of the Daily News went out on quite a limb when he wrote that, “Here is one of those opinions to clip, save and throw back in a columnist’s face should the time come (which it won’t by the way): Neither Roger Federer nor Rafael Nadal will ever win another major title on a hard court. Their championship runs at Melbourne and Flushing Meadows are done, history, a closed draw sheet.”

INTRO TO COMPARATIVE GIRLFRIENDS 101: Semifinalist Tomas Berdych switched from dating his fellow Czech pro Lucie Safarova to dating a younger woman. He confided, “I can say that this one is way better because I think it was too much tennis. I’m dealing with everyday work, that you have to play, practice, organize this stuff, then winning, losing, its quite tough to have it from one side. If you have to deal with the same thing from the other side, it was quite too much. So I’m really enjoying.”

BOB AND MIKE SMASH A RECORD: They are the most user-friendly, chest-bumping duo in tennis, and they win a lot. Fresh off their gold medal triumph in London and another win in Toronto, Mike and Bob Bryan overcame some early round scares and won the U.S. Open to surpass the Woodies – Mark Woodforde and Todd Woodbrige – and claim an Open Era record of 12 Slam titles. Their win over Leander Paes and Radek Stepanek avenged their loss to the Indian-Czech team in the Aussie Open final in January. The only problem is that the brothers win so often, so effectively and so often without angst (let alone meltdowns,) so despite their spectacular play, it is easy to ignore them.

BY THE WAY: Will the singles game suffer more when Federer retires, or will it be the doubles game, which the Bryans have been carrying for many a season.

SOME SET: The second set of the Novak Djokovic-Juan Martin del Potro quarterfinal lasted 84 minutes and was the second-longest set this year.

I’M SORRY I’M SO GOOD: Djokovic apologized for hitting the line with one of his shots.

WHERE ARE ROGER AND RAFA: This is the first US Open since ’03 with no Federer or Nadal in the semis.

FROM HAPPY HUNTING GROUND TO BOOBY TRAP: Christopher Clarey of the New York Times reflected on a certain Swiss genius and Flushing Meadows. He said, “Once the happiest of hunting grounds for Roger Federer, the United States Open has turned into a booby trap … His recent defeats share a common thread: blown leads and missed opportunities. In 2009, he lost a one-set advantage against Juan Martin del Potro to lose in five sets. In both 2010 and 2011, he failed to convert on two match points and ended up losing to Novak Djokovic.

SAY IT ISN’T SO: Ryan Harrison isn’t the only young American with a short fuse. Jack Sock was fined $5,000 for unsportsmanlike behavior and all that after losing his third-round match to Nicolas Almagro.

SOMETHING HAD TO GIVE: Both semifinalists, Victoria Azarenka and Maria Sharapova, hadn’t lost a three-set match this year.

NOT SO VANILLA MARIA WITH SPRINKLES:

* When asked to reflect upon her incredible year, Sharapova said, “I’ll take the results … I look back in the beginning of the season and remember going to Australia early and not really sure I was going to play that warmup tournament. My ankle was still not feeling great. So if anyone had told me when i had that uncertainty … that I would have this type of season… I would have been pretty happy. “

* When asked whether she would stick around New York for fashion week or head home to L.A., Maria said, “I’m looking forward to checking out the ice cream truck that’s around the corner from my hotel. It’s been haunting me. I’m telling the driver, like, get out of here. I can’t look at you anymore. So I’ll have time for that…[and it will be] vanilla with rainbow sprinkles.

* Matt Cronin asked Sharapova, “So, do you say to yourself, I’m happy I played Victoria much closer than I did at Australia and Indian Wells and I came close to beating her, or do you say, big missed opportunity; I should have won the match?” Maria said a loss is tougher to handle when the score is close like today.

* Scott Price of Sports Illustrated asked Sharapova: “Jimmy Connors was saying last week that no matter what you do after you’re done playing, nothing is going to be like being out there in front of 25,000 people showcasing your talent.” Maria agreed and said, “There is nothing in life that gives you that … moment … The losing is always not fun, but the victories and everything just happens in moments; whereas in other careers it’s such a different process … You can be such a great actress or model, but if nobody puts you on a cover of a magazine, you can be so good ,extremely talented, but your career is always in the hands of other people … I’m so happy I’m not in any other career. I wouldn’t trade this for anything.”