The Easter Bowl Spring Nationals return to the Rancho Las Palmas Resort in Rancho Mirage April 12-19 and like every year since 1968, the nation’s top junior tennis talent will be on display.

Chase Buchanan won the boys’ 18s and Melanie Oudin the girls’ 18s last year in Seena Hamilton’s tournament that has always served as a launching pad for America’s next great tennis players.

The tournament even has its own website for the first time and can be found at easterbowl.com where you can view old photos of the tournament and see list of all the past champions.

Hamilton is considered a pioneer in junior tennis circles and has always done innovated things to set the Easter Bowl apart from other events.

Hamilton said it was tough promoting the event at first. Then she got an idea from Gladys Heldman, the editor and publisher of World Tennis Magazine. “I was told since I couldn’t pay the best kids to play then instead I would give them airline tickets,” she said. “That is how Jimmy Connors played the first Easter Bowl and we got headlines in the New York Times.”

She was one of the first to have a sports psychologist give seminars to parents and started the week with a player welcoming party. All the TV and publicity it received early on were all unique to junior tennis in the early days and she used her PR background and love of the game to create a unique atmosphere somehow making a highly competitive event fun to play.

A former author, editor and host of an all-night radio show, Hamilton was also one of the first tournament directors to get sponsors to underwrite the costs of the tournament.

There has been recent discussions by the USTA to possibly make the tournament a clay court event and move it to Florida.

USTA director of junior competition Lew Brewer said because there are more clay courts in Florida, a move might have to happen. “There are some who think American juniors would be better players if they had more competitive experiences on clay and the springtime seems to be the logical time to do that. On the other hand, there are people like Seena that think the tradition and history of America is one of hardcourt tennis. We’re taking a real hard look at that and have had some exploratory talks with Seena about it. But it would be a big thing to ask Seena to move the tournament to Florida so it could be on clay and that’s a decision that weighs heavily on us. It’s really just an idea right now and something that we have to talk more about.”

“We like where it is now,” said Hamilton’s son, Bryan Fineberg, who is taking a more active role in the major operation of the tournament this year. “It’s in an ideal location and positioned well to grow within the Rancho Mirage community. I’ve always stayed somewhat removed from the Easter Bowl. But I would like to see the legacy continue. The thought of it ending or turning into something entirely different is somewhat disturbing. My 8-year-old daughter Kelly knows this is her grandmother’s tournament and maybe it could one day be hers too.”

Moving would not be a first for the Easter Bowl, which was played in New York the first 10 years. From 1979 to 1981 it was moved to New Jersey and from 1982 to 1983 it was in Florida. In 1984 it moved to Tucson, Ariz., and from 1985 to 1994 it was moved back to Florida. In 1995 the tournament was played at the Riviera Resort in Palm Springs and then alternated between California and Florida until 2000. The past two have been played at Rancho Las Palmas.

Fineberg said Hamilton has had her run-ins with the USTA, but that is not uncommon when you’re dealing with such a big organization. “The more important the Easter Bowl became the more she had to start fitting in with the USTA framework and how they do things,” Fineberg said. “That’s not always been easy for someone like Seena who is used to thinking outside the box. At times there has been friction.”

Brewer agreed. “Seena and I have a good working relationship,” he said. “We understand each other. If every tournament director had their heart in their event like Seena has then American tennis would be much better off because she truly is concerned about the players and the event. Seena’s very passionate about this tournament.”

Fineberg made it all the way to the quarters in the 18s at the Easter Bowl in the early 1970s and went on to play the pro circuit for several years, earning wins over players in the top 100 in the world. Nerve damage to his wrist ended his playing career and Fineberg went on to spend the next 20 years directing tennis clubs. For the past 10 years, he has been involved in real estate.

Don’t forget to lock in your team’s space in the always-popular Palm Desert Senior Cup. The Palm Desert Senior Cup will once again feature world-class competition and fun at some of the desert’s most beautiful country clubs and resorts, March 23 -26. For 15 years, the PDSC has watched the event grow and attract players from all over the country. The Cup is a seniors (50 and over) super senior (65 and over) team doubles tournament for men and women. Teams consist of six players plus substitutes. A minimum of seven players is required on the roster for each team. Players enter as a team, not as individuals. The Cup also features a player’s breakfast, and a reception and dinner at the Renaissance Esmeralda Resort and Spa. The entry deadline is March 2. For info visit pdsc.homestead.com or call 760-346-1276.

Publisher George Anich has created a new sensation in the desert by founding the web site eTennisNews.com, which gathers local tennis news for the desert cities. Anich, who runs the Palm Desert Senior Cup, has been involved in tennis for over 25 years as a player, league captain, chairman of a large college tournament and as the owner of a tennis and golf memorabilia gallery.  “I love tennis – it’s a passion of mine,” Anich said. “This site is just another example of the love affair  I have with tennis.” Anich encourages players, captains and industry folks to to share their stories and photos, E-mail George@eTennisNews.COM.

Unseeded Julia Vakulenko gave notice that she is back on top of her game in the finals of the Childhelp Desert Classic at the Mission Hills Country Club in Rancho Mirage. Vakulenko made short work of American Lauren Albanese 6-0, 6-1 to win the final in a match that lasted just 48 minutes. In her semifinal and final wins, the six-foot-tall Vakulenko lost a combined total of five games.

“This win means a lot to me because my American family lives in nearby La Quinta and they were able to watch my matches,” Vakulenko  said.  Tournament director Lornie Kuhle said  the event will return to Mission Hills in 2010.

For the first time in its 20-year combined history, the BNP Paribas Open will offer equal prize money to both men and women. The event is also adding another evening session on Thursday, March 12, which will make 21 sessions of match play. Last year, more than 330,000 people attended the two-week event, making it the most-attended tournament in the world outside of the four Grand Slams.

The third-annual BNP Paribas Open Tri-Level National Championships, an amateur doubles competition involving USTA sections, will be held again over the final weekend of the BNP Paribas Open, March 20-22, at the Indian Wells Tennis Garden. Each USTA Section team will be comprised of 12 members (six women and six men) providing for one doubles team per gender in the 3.5, 4.0 and 4.5 ability levels.

The format includes individual doubles teams competing against the same ability and gender in a separate compass draw. Each match won will accumulate points for their respective section, and the section with the most points will be crowned the BNP Paribas Open Tri-Level National Champion.  Each member of the winning team wil  receive a complimentary sportswear package from FILA. The participants must be current USTA members and have current computer-generated NTRP ratings. Each participant will also get  complimentary ticket for each of the four final weekend sessions. Call 760-200-8400.

The UC Riverside men’s team split a pair of matches against Vanguard and Riverside Community College. UCR lost 5-2 to Vanguard but defeated RCC 5-2 in the nightcap. UCI began its season with a 4-3 win over Air Force. After dropping the doubles point, coach York Strothers’ squad came back and took four of the six singles matches. No. 4 John Park (Alhambra, CA) defeated Mike Gies 6-0, 6-2., while Yi Chai won his match at No. 6.  Freshman Austin Andres (San Jose) earned a share of his first Big West Male Tennis Athlete of the Week award. 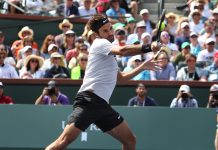 THE BUZZ: The Federer File – Plus Quotebook 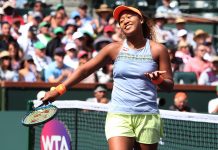 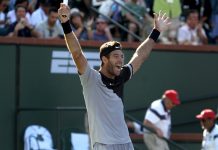