Peak experiences, they say, are the spice of life. So some climb mountains or run marathons. For tennis players it can be a matter of winning the club championship or going to the nationals in league play. Or, for that matter, seeing the incomparable Roger Federer in person.

Yes, the guy looks incredible on TV. Still, there’s nothing like seeing him in the flesh. Yet, for Bay Area tennis enthusiasts, that has long been impossible. After all, what would bring Roger here? For five years there hasn’t been a big ATP tournament by the Bay.

But miracles do happen, and after Federer’s wildly successful Match for Africa 4 fundraiser in Seattle last year, he figured the West Coast would be a good place for his fundraiser to visit again. Thus his appearance at Match for Africa 5, which on March 7 featured him, Jack Sock, Microsoft’s Bill Gates and The Today Show’s Savannah Guthrie hitting before 15,000 elated fans.

So the lights dimmed. The spotlights swirled. The Olympic theme sounded. Roger was in white, Sock was in pink and the crowed was in ecstasy.

Everyone knows Roger can do everything. And tonight he did what McEnroe, Borg, Sampras, Agassi and Roddick never came close to. He drew upwards of 15,000 to a Bay Area tennis match.

The happy banners read, “No Roger, No Tennis” and “Believe in Roger.”

Tonight this was tennis as a cult of a wonderful personality. A love-in for a man who is celebrated around the globe and was the focus of attention in the biggest night in the Bay Area since Richard Williams brought his eldest daughter to Oakland for her debut (as the wide-eyed Serena looked on).

Going in, Federer, ever the adept strategist, advised the Today Show star (and over-the-top Roger fan) Samantha Guthrie: “Stop looking at me and start watching the ball.” Her partner, America’s No. 1 player Jack Sock, conceded that he’d never beaten Rog, so the best advise he came up with was, “Don’t hit the ball at him.”

Guthrie gushed that everything about the wonderful fundraiser was great, except actually playing the match. Yes, she had written a wonderful best seller, “Princesses Wear Pants.” She played tennis at camp for three summers and had trained hard in Korea during the Olympics and with Bill Gates prior to the matches.

But playing Roger was something else. “It had all the emotions there are in life, including embarrassment,” she told IT. Yes, Guthrie was dazzled by Roger’s ‘tweeners. She hit a few volleys that almost made it to Cupertino. She was reduced to pleading, “Stop hitting it at me. I don’t want it…I know, I know: keep your eyes on the ball, eyes on the ball – got it.” She added, “There should be an award for missing every shot.” Her Today Show partner, Al Roker, told IT that the only way Savannah could put any hurt on Serena Williams at the US Open was if she did it beforehand in the parking lot.

For his part, Roger noted that his partner Bill Gates “knows numbers – he’ll keep track of the score, I’ll do the running and he’ll do the thinking.” But even when Roger was totally immobile and brought to his knees at the net as he returned Sock’s shots, he prevailed. Yes, Federer proved he was human as he actually missed a way-too-casual forehand when he had his hand on his hip.

In the end, Gates did display surprisingly micro-soft hands, and Guthrie was an incredibly good sport. Jack Sock often unleashed one of the best forehands on the planet (along with Del Potro, Roger and Nadal).

But this night was a non-stop, full-throated love-in for Roger. He didn’t disappoint as he showed off his full arsenal of assets: flash forehands, glorious low crosscourt backhands, effortless backhand overheads, seeing-eye winners at crunch time, balletic grace and, of course, good humor and a user-friendly class.

But then again, what would you expect from a man who has not only won a record 20 Slams and is No. 1 at age 36, but who is a giving humanitarian who’s brought quality education to 875,000 children in Africa and provided dazzling entertainment to 15,000 enchanted tennis lovers in San Jose while raising $2.5 million in just one sweep through town. 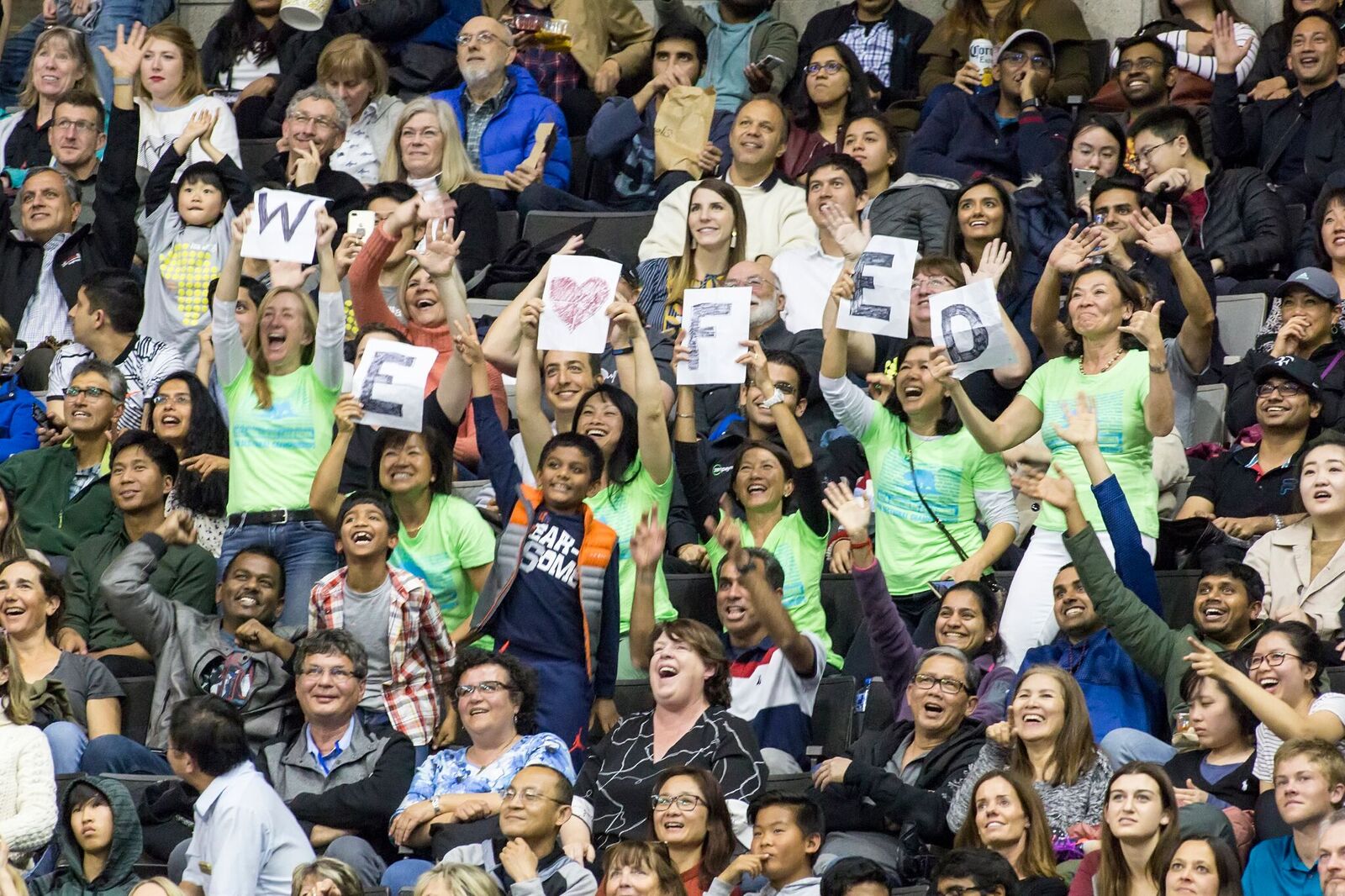