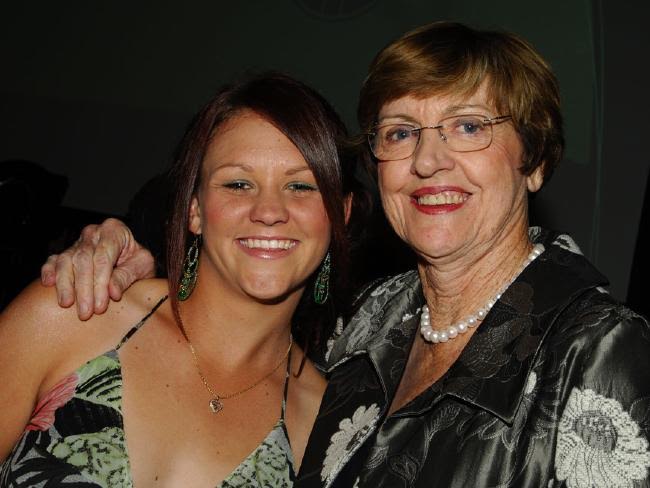 Pictured above are Casey Dellacqua and Margaret Court

After we contacted Mary Carillo, asking her for a comment on Margaret Court, she replied with this extraordinary note. “Bill, you ask me to react to Margaret Court’s comments on the same day that President Trump has pulled us away from the Paris accord. My whole world seems to be rejecting the realities of the dangerous present…

At first my inclination was to ignore Margaret Court’s harmful, hateful words. She is shouting at the ocean; surely the seas will drown out her incessant cries of perversion..unless our president destroys our fragile ecosystem so thoroughly that even the seas cannot rise above Margaret’s risible declarations.”

Both Court and Trump claim to be Christians. What kind? And where is the kindness?

At its beginning, tennis was a royal sport in France. Then, as it came to be played on serene Victorian lawns, it became a popular diversion of the British elite. European colonialists then transported the game to many a far-flung country within their empires.

For decades in America, it was very much a preppy, whites-only country club sport. People of color needed not apply and Jews were routinely blackballed when they applied for club memberships.

But, mores shifted. The once-cloistered game became an open sport, TV entered the picture, and all the rabble – the unwashed masses – poured in.

Over time, anti-semitism diminished without much of a public fuss. All the while, perhaps more than any other sport, tennis spawned one extraordinary social justice hero after another.

Venus and Serena fought against racism, sexism, anti-semitism and body-shaming.

This tennis heritage of being an uncanny change agent is a complex, yet almost breathless tradition. Time and again tennis reached out beyond the x’s and o’s with a keen social sensibility. At its core, our sport often realized that character matters.

It’s no accident that, more than other sports, tennis centers are named after those who have inspired: Arthur Ashe and Billie Jean King in America, Philipe Chatrier and Suzanne Lenglen in France and Rod Laver, Patrick Rafter and Margaret Court in Australia.

But now the unthinkable has occurred. There are calls to remove Court’s name from the Australian Open’s No. 3 show court.

Of course, the current Court brouhaha is hardly the first time the outspoken Aussie has raised eyebrows. In 1990, just hours after Martina Navratilova won Wimbledon, Court rained on her parade by saying the American lesbian was a bad role model.

Through the years, Court, who is a fundamentalist minister at Perth’s Victory Life Church, made intermittent negative comments on homosexuality and gay rights. (Plus, she strongly praised apartheid and offered controversial views relating to aboriginals.)

In a world where gay rights and marriage equality were hardly on the ascendance, though, Court’s remarks had little impact.

But, as we said, times change. Now there’s a certain consensus that the human rights of all should be respected regardless of gender preference. People have the right to love whomever they wish. To many in a very international sport, Court’s views seem outdated, marginal and, to some, hateful, even cruel.

For instance, just after the highly popular WTA player Casey Dellacqua had a child with her same-sex partner, Court again rained on the parade and suggested that the birth was indicative of the coming threat of a “fatherless generation.”

Delllacqua recently recalled, “I let it go because it was a very happy time in my life…[I] thought, ‘I’m not going to let anyone ruin my happiness.’…but when you start singling out my family especially, that’s when it’s not okay. And my family do not deserve to be subject to that.”

More recently, when the head of Quantas airlines joined with 20 other Australian corporate leaders and indicated their support of marriage equality, the 74-year old Court who is a fundamentalist Minister at Perth’s Victory Life Church, announced she would boycott the airline.

People were upset. But far from apologizing, Court doubled down. Talking on Vision Christian Radio, Court said, “Tennis is full of lesbians. Even when I was playing there were only a couple there but those couple…took young ones into parties…And what you get at the top is often what you’ll get right through that sport.” She added: “We’re there to help them overcome. We’re not against the people.”

As for transgender people, Court asserted, “You can think, ‘Oh, I’m a boy’, and it will affect your emotions and feelings and everything else. That’s all the devil.”

The goals of Court’s church were also publicized. They included:

Stop homosexuals from brainwashing our children into homosexuality.

Stop their influence on our leaders who say that this is “normal behavior.”

Court also recently said, “We know that homosexuality is a lust of the flesh. So is adultery, fornication, all those things…they too know this, this is why they want marriage.” Court also stated that the gay movement was “a plot…in the nations of the world” and that is what Nazis and communists did.

Naturally, there has been blowback. Holland’s Richèl Hogenkamp became the only active player to call for renaming Margaret Court Arena. Some players have avoided the issue. Garbine Muguruza said, “I don’t really give a damn what she says.”

But a wide swath of players, from Nick Kyrgios to Ashleigh Barty, supported the concept of marriage equality. Aussie John Millman said Dellacqua was a great person and a great mother. Andy Murray commented, “I don’t see why anyone has a problem with two people who love each other getting married…It’s not anyone else’s business. Everyone should have the same rights.”

Billie Jean King backed Martina Navratilova’s call for the court to be renamed. In an open letter to “Margaret Court Arena,” Navratilova wrote, “When you were named after Margaret Court it seemed like the right thing to do…I had long ago forgiven Court for her headline-grabbing comments in 1990 when she said I was a bad role model.

“It is now clear exactly who Court is: an amazing tennis player, and a racist and a homophobe. Her vitriol is not just an opinion. She is actively trying to keep LGBT people from getting equal rights (note to Court: we are human beings, too). She is demonizing trans kids and trans adults everywhere.”

“We celebrate free speech, but that doesn’t mean it is free of consequences – not punishment, but consequences,” Navratilova added.

“We should not be celebrating this kind of…philosophy. The platform people like Court use needs to be made smaller, not bigger.” Navratilova suggested the arena should be named for Evonne Goolagong, and asserted, “Now, there is a person we can all celebrate. On every level.”

So, what’s going to happen?

For starters, you know there is some energy to the renaming movement when a rather macho Republican like John Isner says that – while he’s “indifferent” about the name change – he believes “in two guys getting [married] and two women getting married.” Isner added that he wished Court “wouldn’t have been so outspoken…She keeps harping on it. So it’s brought a lot of negative attention…I mean, no need to bash Casey Dellaqua…She’s an awesome person…[But] a lot of times when stuff like this [movement] gets momentum, it could happen.”

It will be interesting to see what Venus and Serena (who are members of the Jehovah’s Witness Church, which strongly opposes homosexuality) have to say.

Certainly it’s a big ask to strip a name. At first blush, it may seem harsh, even punitive.

Then again, New Orleans Mayor Mitch Landreau explained that his city’s going ahead and removing four statues of Confederate Commanders that “purposefully celebrated a fictional, sanitized Confederacy…is not about taking something away from someone else. This is not about politics, this is not about blame or retaliation…This is about showing we…are able to acknowledge, understand, reconcile and, most importantly, choose a better future for ourselves, making straight what has been crooked and making right was wrong.”

As someone who initiated and helped sustain the campaign to get the USTA to name its US Open Stadium after Ashe, and someone who pushed hard for well over a decade to get Serena and Venus to end their boycott and return to Indian Wells, I know that initiatives involving social justice have an arc of their own.

It took two months to get the USTA’s Board to reverse themselves, while it was 14 and 15 years before Serena and Venus returned.

Australian Open authorities – who are a great group – next year could give players the option of not playing on Court Arena. And if many of them refuse to play, the authorities could say, “Look, the players have spoken.” But that could lead to many a messy consequence.

And, by the way, the arena is owned by the Australian government, not Tennis Australia. Plus, it often hosts rock groups which attract a young demographic that’s strongly in favor of letting people love whomever they want.

In the end, tennis lovers might ask themselves whether they want a major arena to be named for a person with such divisive and demeaning views.

I feel the answer is clear. It’s not just that times change or that tennis cares. To me, as I travel the world, the prime thing I love about tennis is not Roger’s beauty or Serena’s power. It’s the inspiring diversity of a sport that spans so many of the cultures on this earth and has a generous, often unspoken, ethos that all people matter, no matter who they are or whom they love.