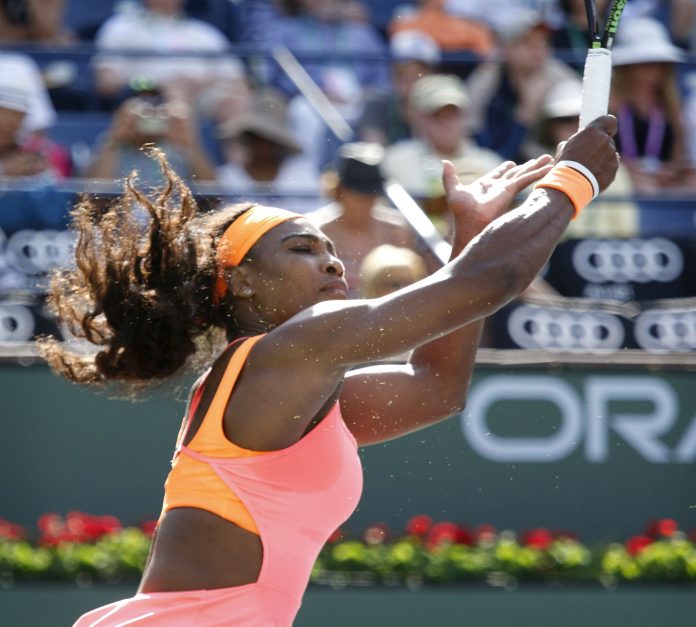 IS MOHAMED TOO AGGRESSIVE? Attention Islamists—this item is not meant to offend: After chair umpire Mohamed Lahyani made some overzealous calls during the Thanasi Kokkinakis–Juan Monaco match, Paul Annacone asked, “Is Mohamed too aggressive?”

WATCHING TV WITH DAD: When Serena Williams was asked about her next opponent Timea Bacsinszky—who’s won all of her matches here from a set down—her answer gave some insight into the viewing habits of the Williams household. “Because she’s been winning so much I have been able to see her play a lot,” Serena said. “At home hanging out with my dad we kind of watch Tennis Channel all the time … What I think most about her is she never gives up. She’ll be down … and you’ll turn the channel and come back and she’s won the match. I think that is a wonderful quality to have.”

GOOD WORK: “I’m just loving my job,” a tearful Timea Bacsinszky said after winning her fifteenth match in a row to advance to the quarters at the BNP Paribas Open. Her job is about to get a lot harder—her next opponent is Serena Williams.

INTENSE VERBAL VOLLEYS: It started innocently enough, when Flavia Pennetta was tearing up on court early in her match against Maria Sharapova. Mary Carillo quipped, “[Maria’s] not going to walk up to net and say, Can I get you a cup of tea? Do you want to talk about it?” Later Tennis Channel’s Jim Courier said It was hard on Sharapova to deal with an opponent having emotional trouble. But Lindsay Davenport followed up by saying she wasn’t sure if Sharapova knew what was going on and she would not let Pennetta effect her either way. Then a not very happy Courier replied, “Thanks for swatting my idea away. That’s why we don’t work together too much.”

Later Courier said to Davenport, “I was just listening to your soliloquy. I’m going off headset. I can’t believe you know the meaning of the word soliloquy.” Davenport then circled her wagons and said, “You’re on fire right now.”

TEARFUL VICTORS: On Tuesday night at the BNP Paribas Open, the winners—Flavia Pennetta, Timea Bacsinszky—cried, while the losers remained dry-eyed.

LOVE GAMES: For those keeping score, BNP Paribas Open defending champ Flavia Pennetta won after her boyfriend Fabio Fognini finally showed up to watch her. Maria Sharapova and her boyfriend Grigor Dimitrov lost their matches within ten minutes of each other.

HARD BALL: Jelena Jankovic said Madison Keys, who she beat in three sets, “hits the hardest ball on the tour … they were like bombs.”

WE DON’T THINK THEY’RE FOOLING ANYBODY: Thirty-year-old veteran Jelena Jankovic said she has “my little braids to make me stay young.”

GO FIGURE: Serena goes into her quarterfinal with an 11-match winning streak, but her opponent, Timea Bacszinsky has won 15 matches in a row … Thanasi Kokkinakis would have won his match against Juan Monaco when a Monaco shot was out, but the ball was called in and the Aussie was all out of challenges. He had to go into a tiebreak before finally prevailing.

THE CLASSICS: There are no great players from Greece right now, but there’ve certainly been some great players with Greek heritage: Pete Sampras, Mark Philippousis, Marcos Baghdatis, and now Nick Kyrgios and Thanasi Kokkinakis.

AUSSIE ALERT: While reflecting on Australia’s stunning Davis Cup win over the Czech Republic, the fabulous run of Nick Kyrgios at the Aussie Open, and the arrival into the round of 16 of Thanasi Kokkinakis and Bernard Tomic, Jim Courier said, “The Aussies aren’t just coming, they’re here.” RAFA ON CLIMATE CHANGE: Asked about the dry heat in Indian Wells in relationship to the humid conditions in Australia and Rio, Rafa Nadal remarked, “It’s always a little bit warmer [here] than a few years ago.” But he added that it’s “difficult to find a place with better conditions” than Indian Wells.

IT’S MORE THAN BEING TALL: It’s not just that John Isner and Ivo Karlovic are each 6’10’ tall—both have tremendous reach.

JUST TOO FASCINATING: Eavesdropping on on-court coaching has evolved into one of the most fascinating parts of watching women’s tennis on TV. Now should men’s tennis do it, too?

HATS ENTERTAINMENT: At the start of her post-match presser after losing to Serena, Sloane Stephens noted the large number of people in the press room and asked, “You guys like my hat?”

SAY MY NAME, SAY MY NAME: In pressers before and after her match with Serena Williams, Sloane Stephens repeatedly referred to Serena as “the No. 1 player in the world” rather than by her name.

FASTER THAN THE SPEED OF SIGHT: When a desperate Sloane Stephens challenged an ace by Serena Williams that was in by a country mile, a Tennis Channel commentator remarked, “Maybe she just didn’t see the serve.”

TOUGH OPPONENTS, TOUGH QUESTION: If Serena Williams wins this year’s BNP Paribas Open, she’ll have won the event more than any other woman, and her titles in Indian Wells will span 16 years—she first won here in 1999. So Serena was asked who—besides Venus—is the toughest opponent she’s faced. “I have played so many great players, from Hingis to Davenport, Monica, Steffi,” Serena said, after protesting that the question wasn’t fair. “It’s a weird position. I have been able to play so many different generations that I don’t think I could just give one answer. Henin [was] amazing.”

CHANGING CHANGEOVERS: Nothing’s supposed to happen during changeovers, aside from Rafa fussing with his bottles. But actually there’s a long tradition of happenings during the obligatory break. Arthur Ashe used to meditate. Jim Courier read a book. And of course there was the infamous bump between Venus Williams and Irina Spirlea at the 1997 US Open. More recently, a jet-lagged Serena Williams asked for an espresso after a slow start during Hopman Cup. But in just the last day or so at the BNP Paribas Open, Juan Monaco repeatedly stood on the strings of his racket to try and loosen their tension against Thanasi Kokkinakis, and Milos (“I’ll leave not stone unturned) Raonic crossed his arms and tapped his knees in what was said to be a meridian stress relief exercise. Most dramatically, an emotional Flavia Pennetta left the court between sets against Maria Sharapova.

QUESTION OF THE DAY: Timea Bacsinszky‘s press conference began with Mary Carillo asking, “Why are you so damn good now?”