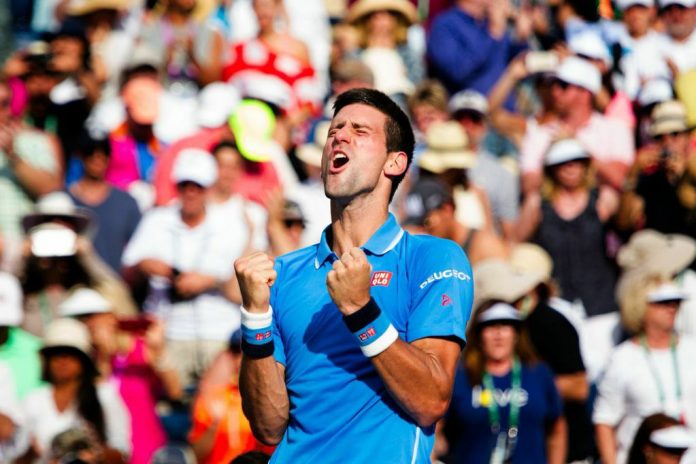 Novak Djokovic is No. 1 in the world. He’s won two of the last three Grand Slams, including January’s Australian Open. He’s 27 and in his prime—focused and confident. He has fabulous movement, core strength, a best-in-the-business backhand return of serve, and tremendous flexibility. He’s the epitome of the modern tennis player. Just ask Andy Murray. And yeah he’s sidetracked by just one kid.

Roger Federer has four. And of course he has grace, a fluid liquidity that’s balletic, a backhand that dazzles, and a “still eager after all these years” passion and will that attracts adoring fans from India to Indian Wells. He’s regal and unreal.

If life were a fairytale, the 33-year-old genius would have prevailed in the men’s final today at the BNP Paribas Open. But just like at last year’s Wimbledon, the Mighty Fed fell distinctly short after forging an amazing comeback. Djokovic may only have one fourth of father Federer’s number of kids, but after his 6-3, 6-7, 6-2 victory, he now has the same number of BNP Paribas Open titles. His fourth win at Indian Wells was also his 50th overall tour title, drawing him one ahead of coach Boris Becker’s 49 career tournament wins.

Djokovic shared his celebratory dessert with the press corps afterward, but the match was no gluten-free piece of cake. In pressers, Federer has pledged a special allegiance to his rivalry with Rafael Nadal, but there’s no doubt that the Federer vs. Djokovic matchup produces a distinct (and less sentimental) brand of thrilling tennis—like two dashing swordsmen or a pair of ruthless quick-draw artists racing to attack. At the Indian Wells Tennis Garden, all their gifts were on display. Novak’s speed and rubberband-man elasticity, which somehow make his wingspan seem wider than John Isner’s. Federer’s feather-light and fatal touch, capable of placing the ball just beyond the fastest opponent’s reach.

While Federer fans cheered him on with a traditional “Let’s go, Roger,” a Djokovic posse at the very top of the stadium varied their chants according to the moment, even targeting Federer by repeating “Pressure! Pressure!” whenever his serve was in danger. Thirty-eight matches into their rivalry, these two are so assured and familiar that fans cheer their trick moves between points, from Federer answering a Djokovic fault with an effortless behind-the-back return, to Djokovic catching and cradling a dead-ball service return with his racket. Of all the Big Four match ups, Djokovic-Federer is the one most about “controlled aggression” (as Federer put it afterward), and it times it boils over into anger: more than once Federer swatted a ball skyward after a routine miss, while Djokovic shook with frustration at one point and smashed a racket at another.

And the battle itself, you ask? Flashes of brilliance and lapses of concentration were both on display. Like most matches at this year’s tournament, the ratio of winners to unforced errors was unflattering, but the number of inspired or even breathtaking shots was high as well, even within rallies. Both players came into the final in dominant form, but Djokovic capitalized on a single break to seize the first set with ruthless quickness, 6-3, and grab an early break in the second.

But from 4-2 up there were some deja vu moments, as Djokovic threatened to follow in the footsteps of his fellow Serbian finalist Jelena Jankovic, who’d tossed away her title hopes with a slew of service woes just a few hours earlier. Where once Novak’s serve had reliably dug him out of deficits, serving at 5-4 in the second set tiebreak, he delivered two double faults in a row. One second the stadium was so silent that you could hear Djokovic’s signature before-serve ball-bounce routine. The next the whole place ignited in a collective roar. All it took was a commanding serve from Federer and the battle was back on event terms.

But at the start of the third Federer’s backhand went MIA, leaking errors into the doubles alley and net, as Djokovic regained control. With Djokovic serving at 2-0, Federer mounted one last surge. Not only was he outlasting Djokovic in rallies—who does that?—he was even calling the lines perfectly when needed, twice reversing the outcome of points with the help of Hawk-Eye. When Roger converted on his fifth break point attempt, the stadium erupted again. A thriller was in the making.

Or so it seemed. At 2-3, 40-15 on Federer’s serve, the momentum switched back once more to Djokovic, as he steadied his game and the Federer backhand again went off course. On break point the Serbian taunt reappeared—”Pressure! Pressure!”—and Federer succumbed to it. Even the man who many consider the greatest ever can double fault at crunch time. “I’m not the only one double faulting under pressure,” Novak said afterward, and on this day, he wasn’t kidding. Which brings us to…. Everyone had an opinion on the Simona Halep–Jelena Jankovic BNP Paribas Open final. To even-handed analysts, it was a textbook example of how not to win a big tennis match. Don’t have much belief. Waste your energy on what happened long ago in the match. Don’t stay in the moment, and falter at the end.

Chris Evert was more succinct, simply saying. “You have to be a psychologist to coach women’s tennis—let’s get that one out of the way.” There was ample entertainment—and frustration, to a degree that had one voice in the press room marveling at the sheer number of service breaks.

The first game was an omen of the match to come—a lengthy see-sawing affair that ended with a break of serve. There were 17 more of those to come. At one point a shockingly focused Jankovic was two points away from repeating the scoreline of her 6-2, 6-4 win over another Slam bridesmaid, Caroline Wozniacki, in the 2010 final. But then the inevitable unraveling—already present in a slew of double faults as tentativeness crept into Jankovic’s game—fully took hold.

In a Serena-less final, Simonamania ran rampant in the stands if not on court. Chants of SEE-MOH-NAH ranged from confident to worried to triumphant while the quiet Romanian steadied her resolve if not always her game. “The action between the players’ boxes is a lot more exciting right now than the action between the players,” ESPN’s Pam Shriver remarked at one point. Aside from strong backhands, Halep and Jankovic are a study in contrasts. Nary a Jankovic match goes by without a laugh and an argument, and this one was no exception. As for Halep, even her fist pumps are compact and inward—stylish in the most low-key way.

Afterward, Jankovic delivered the more memorable speech, saying she and Halep were “running like two dogs left and right,” and going on to thank her hairdresser. But the hefty trophy belonged to Halep. The 2-6, 7-5, 6-4 marathon win was the biggest victory of her career, as the season approaches the surface—clay—where she first began her ascent in 2013, with a three-set win over an opponent named … Jelena Jankovic.