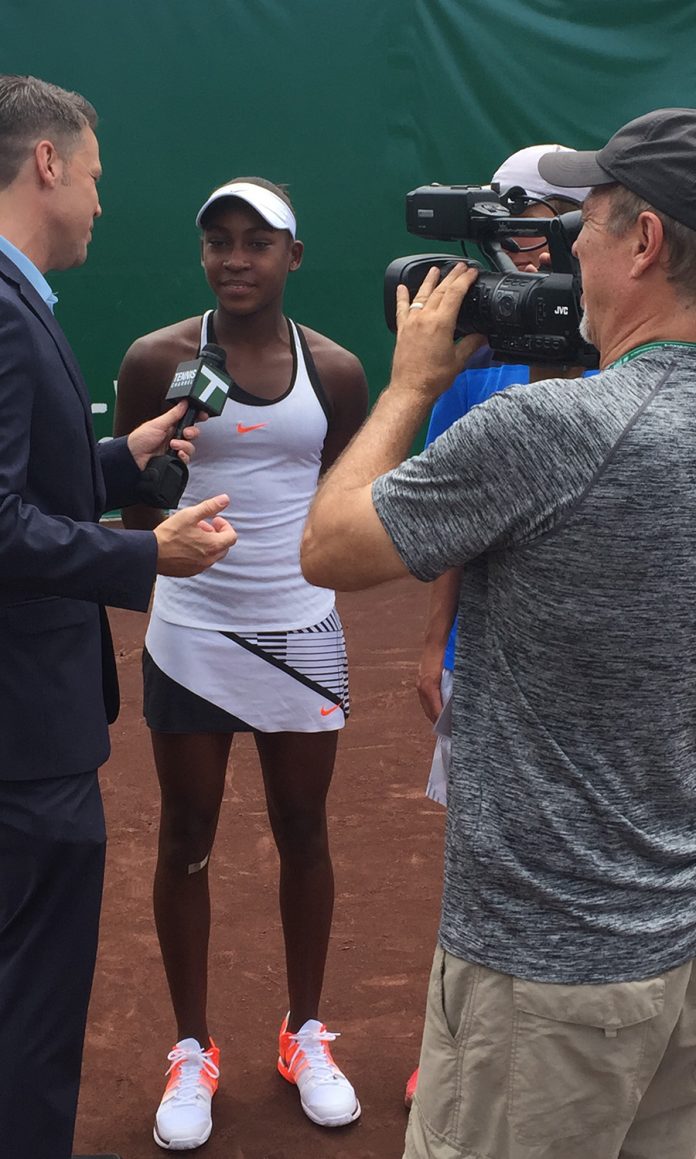 Where’s the next star?

Who’s the next great phenom?

We saw it with Steffi Graf at the 1984 Olympics, or the once-innocent Monica Seles. There was a tall thin waif – Venus Williams was her name – who emerged at the Oakland Coliseum in 1994 and almost beat Arantxa Sanchez-Vicario.

Now, as the pregnant Serena approaches her twilight, tennis wonders where the next Serena is going to come from. Madison Keys and even Sloane Stephens may have grand careers. Northern California’s appealing CiCi Bellis, 17, is a fabulous prospect. So is San Diego’s Kayla Day.

In addition, knowing sages are musing on the prospects of an athletic 13-year-old in Florida nicknamed Coco. No it’s not Australian Open semifinalist and Fed Cup hero Coco Vandeweghe. It’s Cori “Coco” Gauff, a wide-eyed African-American kid who idolizes Serena, but has the drive and moxie to say that she wants to do even better – that’s confidence.

But, what the heck, why not? The daughter of two Southeastern athletes – her mother was a track star at Florida State, her father played basketball at Georgia State – Coco has a big body, a big serve and gigantic goals. Already 5′ 9″ and fast, she is very physical, has an all-court game and is aggressive off both wings. Her father Corey, who also coaches her, is focusing on her serve, her returns and developing her forehand into a weapon. According to some, along with 15-year-old Amanda Anisimova, she is the biggest 16-and-under prospect in the carefully-examined US pipeline.

Coco’s approach emphasizes family, academics and training, rather that just tournament play. The Delray Beach resident sings in a choir, is on the dance team, announces Little League games and, to gain poise, does public speaking at her church.

Fortunately, concentration is one of her big assets. She often “plays up” in the juniors, recently won the Rendez-Vous a Roland Garros USA, and before competing for a junior wildcard in Paris will head off to again work with Serena’s coach Patrick Mouratoglou in the south of France. In late 2016 she won the girls’ 12s at the prestigious Orange Bowl tourney, which a fellow named Federer won when he was 15.

Coco’s father Corey Gauff told IT that the Orange Bowl was “the first time she went into a tournament as the overwhelming favorite. So far that’s been her biggest accomplishment. She didn’t give in to her nervousness.”

Now it will be interesting to see if Coco will withstand and build upon all the pressure that inevitably will build. “Even when she was three,” her Dad recalls, “She would run and run and run. We knew she had a special kind of determination…She wants to win a lot of Slams and right now that number is sitting at 25 [one more than Margaret Court].”

Corey chuckled. But it was one of those laughs that also was quite serious. “I haven’t talked her off that goal,” he said, “because sometimes parents can kill dreams. I tell her that to be the greatest, you have to be the greatest worker and have the greatest discipline. She understands that. She has a good example right in front of her with Serena. What she has done for us as a family, for any little girl, is let them know that anything is possible.”

Corey notes that the family puts an “emphasis on winning – but as a byproduct of hard work. If she can stay spiritual and stick to her discipline and her goal of making a mark on her sport, [maybe] we can look back 25 years from now and say, ‘Hey, she inspired a lot of girls to play tennis in the US.’ And if she wins a lot of tournaments and does it on her own terms, that would be what we’d want the most for her.”