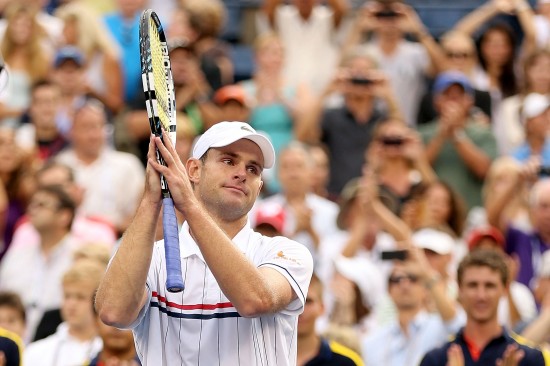 Roddick applauded the crowd after his last match in New York.

1. With his 155 mph serve and punishing forehand, just how much did Roddick’s game transform the sport?
2. Was Andy the best “one Slam wonder” in tennis history? We’d certainly put him ahead of Pat Cash, Thomas Muster, J.C. Ferrero, Juan Martin del Potro, Yannick Noah and Michael Chang,
3. Was Andy an underachiever who “just” won one Slam or an overachiever who worked so hard, competed like a warrior and got almost all out of his talent?
4. What if there was no Roger Federer on the scene. Andy put it this way: “You start thinking, ‘Okay, you’ve lost to him six times in the semis or further at majors-[including a] couple of Wimbledon finals where you’re playing well [and at] a Wimbledon semi where you’re playing well.’ No, I’ve never thought about it…”
5. What if Andy had a better backhand with more versatility? He worked hard on the shot and upgraded it. It wasn’t bad. Still, John Wertheim contended, “The book on how to beat him is not only out but it’s dog-eared and tattered: Work the backhand, invite him to approach, let him self-destruct.”
6. What if Andy had not gradually added topspin to his forehand and remained with the flat, offensive forehand which was such an intimidating weapon early in his career?
7. In his epic 2009 Wimbledon final against Federer, Andy was up a set and had a set point in the second set tie-break. The Texan had a very makeable volley to the open court to take a commanding lead. So what would have happened if he hadn’t hesitated and bungled the shot?
8, Has there ever been a bigger “sympathy loss” in American men’s tennis then Roddick’s (16-14 in the fifth) loss to Roger in the 2009 Wimbledon final? The conventional wisdom: Roddick lost a single match, but gained a million fans.
9. Did Andy, who won the U.S. Open and became No. 1 in 2003 somehow win too early in his career? His former coach Dean Goldfine contended, “The thing that happened to Andy…[that] hurt him and has been a bit of a curse, was winning the U.S. Open as young as he did when he wasn’t a complete player.”
10. Billie Jean King is the greatest mentor in the women’s game. In the American men’s game, has there ever been a better buddy and mentor then Roddick?
11. Goran Ivanisivic and Marat Safin had droll senses of humor. Novak Djokovic did does imitations and loves the stage. But with his sarcastic, wise-guy humor (which is as fast as it is acidic) is Andy the funniest player in memory?
12. John McEnore loved Davis Cup. But there was a hefty downside to be dealt with. So, has anyone upgraded the importance of the competition more than Andy. Before Roddick: players found ways to bow out. Now everyone wants in. BTW: Andy wasthe best closer in Davis Cup history. He was 12-0 when he had a chance to clinch a Davis Cup tie.
13. If Andy was not a tennis player would he have made it as a tight end in the NFL.
14. Why is he retiring now? Well, he wants to go out on his own terms. But he did win Eastbourne on grass and Atlanta on hard courts and was the last American standing at the U.S. Open. But unlike many in and out of sports, he was not delusional about retirement.
15. When Agassi retired, Andy noted, “When I
was coming up, it was Andre and Pete. Then it was [just] Andre. Now
it’s us, and we have to step it up … My training wheels are gone.” So now who will carry the torch for American men’s tennis: John Isner, Mardy Fish, Sam Querrey, Ryan Harrison, Jack Sock, Steve Johnson or none of the above?
16. Agassi has many connections in show biz. But, John McEnroe aside, does any tennis player have a greater crossover resume then Roddick. His TV appearances include Saturday Night Live, The Weakest Link, Jay Leno and Sabrina the Teenage Witch, plus a cameo in one of his wife’s movies. Plus, looking ahead he could have a stellar career as a commentator. (But at which broadcaster’s expense?)
17. Was American Express’ 2005 (“What happened to Andy Roddick’s Mojo”) ad campaign the biggest marketing flop in tennis?
18. Many tennis players have relationships with others in sports and entertainment. Here’s a list. 1. Agassi-Graf; 2. Connors-Evert; 3. McEnroe-Tatum O’Neal; 4. Agassi-Brooke Shields; 5. Agassi-Barbra Streisand; 6. McEnroe-Patti Smythe; 7. Wozniacki-Rory McIlloroy; 8. Evert-John Lloyd; 9. Evert-Andy Mills; 10. Anna Kournikova-Sergei Federov. So where do Andy and Brooklyn belong on the list? Speaking of celebrity duos, in the final of the 2006 U.S. Open Andy had his coach Jimmy Connors in his box while Federer had his friend Tiger Woods in his. Was this the best battle of the Friends Boxes in tennis memory?
19. Like players from Bjorn Borg, Billie Jean King and Martina Navratilova to Thomas Muster and Kim Clijsters, will Andy re-consider and un-retire? We doubt it.
20. Will we someday look back and realize how much drama, grit and effort Andy gave us over the years? How we will miss him.