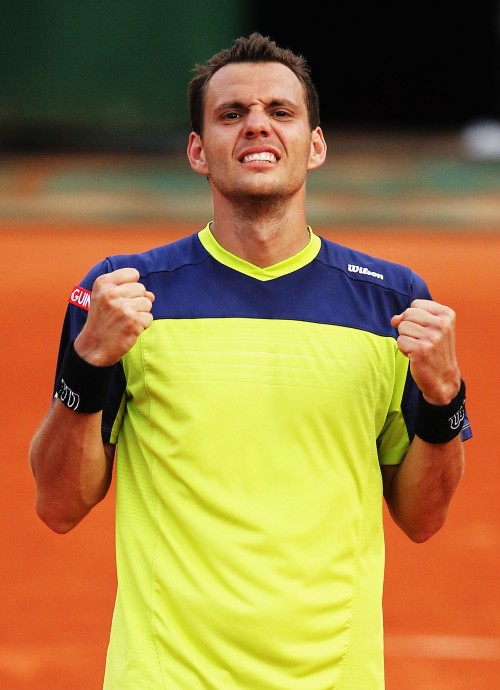 As shadows deepened and the John Isner vs. Paul-Henri Mathieu second round match went deep into the fifth set, one phrase came to mind: “Here we go again.” On Paris’ Court Centrale, in locker rooms and bars all around the world, all of tennis thought of Isner’s epic three day, 70-68 Wimbledon struggle against Nicolas Mahut.

Now here was Isner in the middle of another fifth set marathon with a journeyman Frenchman with the initials “HM” and a two syllable last name (And yes, Mahut and Mathieu sound quite alike.)

Of course, match for match – no other player has more compelling Grand Slam matches then the tall Southerner who will forever been remembered for his 11:08 classic against Mahut. Plus, Isner battled in a spate of other incredible Slam matches against Rafa Nadal in Paris,  Andy Roddick in New York and Louk Sorensen in Melbourne.

The gigantic man looks so languid, even lackadaisical. Others sprint, he lopes. But this former Georgia Bulldog is a ferocious competitor with the guts of a burglar and great good courage. Now he is becoming a bit of a clay court phenom.

Of course, the only return Paul Henri Mathieu has been interested in  of late is just returning to the game.

Due to devastating injuries he didn’t play at all in 2011. Once ranked No. 12, he’s now a lowly No. 241. He 30 and didn’t have a coach and could claim, in 22 tries, just one win over a top ten player. But his home Federation gave him a wild card into Roland Garros. And in the first round, Mathieu used his great groundies to win a five set match over German Bjorn Phau, but was quite the underdog in the second round. After all, the 6’ 9” Isner had just said his serve was dangerous on any surface, “even mud.” And Court Centrale in Paris is hardly mud. It’s the most fabled clay court in the world and Isner had been having a certain European affair with the surface. Not surprisingly, Isner won the first set in a tiebreak. But despite Isner’s reign of aces, Mathieu scrambled back to win the next two sets before Isner won the fourth to set up a fifth set drama.

It was a good play.

Serving first, Mathieu stroked precise groundies to hold his serve with ease. Isner’s formula – big serve, power forehands, few backhands and occasional net rushes – is designed to hold serve and look for an opening to steal a game when his foe was serving.

But Mathieu, backed by a frenetic crowd, was in no mood for thievery. Sadly for him, he had not only lost a key Davis Cup match to American Andy Roddick in 2010, he is most known for losing a two set lead over Mikhail Youzhny a decade ago which gave the Davis Cup title to Russia. Pain. And yes – that other Frenchman, Mahut – did lose to Isner and the U.S. just crushed France in Davis Cup this Spring.

Pay back was in the air.

As the fifth set went deep into overtime Isner played one hapless drop shot after another. His backhand misfired and when he was down 11-10 he had to save three match points on his serve.

But that’s Isner’s modus operandi, using his serve and forehand to snatch wins from the vice-grip of defeat. Never mind that he was exhausted, that his hands were on his hips, that he could barely move and didn’t even run after many a Mathieu shot, Isner soldiered on, a battered heavyweight who refused to go down.

In a drone pattern reminiscent of his match against Mahut, Isner and Mathieu traded holds. With the Frenchman up 15-14 the American giant saved two more match points. But the veteran Mathieu – steady, sure and precise – held his ground, held his serve and held his nerve. He pounded his chest and the crowd pounded the stands and  yelled “Allez Mathieu” (Go Mattieu). And in the 34th game of the fifth set, on his eighth match point, Mathieu watched as an Isner forehand sailed into the alley. Allez Mathieu indeed.

The Frenchman scored a 6-7(2), 6-4, 6-4, 3-6, 18-16 win. After 5:41 (which was the second longest match in French Open history) the man who had been tagged as a choker threw his hands in the air and threw kisses to the adoring throng. After all – gone, at least for this day – were memories of classic Wimbledon losses and Davis Cup debacles.

On this day Isner’s last ball was in the alley – “Allez Mathieu.”