He may be tennis’ best player, but he’s also the game’s most misunderstood, underappreciated and complex star.

Novak Djokovic could win 30 Slams, save some kids from a fire and come up with a new, knock-your-socks-off variety of chocolate ice cream, and still he wouldn’t come close to the popularity of the vastly charismatic Roger Federer and Rafa Nadal.

After all, in part, sports are a popularity contest. Despite his dominance on court, Ivan Lendl never came close to being as famous as Jimmy Connors or John McEnroe. And, for all of Martina Navratilova’s fabulous records and longevity, she got only a small measure of the adoration that was heaped on America’s sweetheart, Chris Evert.

Still, we were shocked when, in Thursday’s press conference, an ESPN producer asked Djokovic an extraordinarily tone-deaf question: “What has it been like to be something of ‘the bad guy’ chasing after Roger and Rafa all these years?”

Just hearing Djokovic being called “the bad guy” was a jolt. The question didn’t exactly help the image of tennis’ press corps that has recently been bashed.

As for Novak, he sure has made some hefty mistakes. Following a history of racket tossing and ball bashing he hit a linesperson in the throat with a ball. He hosted a disastrous COVID-spreading tennis exhibition. Telling the world that the power of thought purified water and that he was reluctant to take a vaccine was hardly ideal during a pandemic. His presidency of the ATP Council had important upsides. Novak wanted to get more money for lower ranked ATP players and more power for all players. Yet some of his other actions and his lack of actions and questionable transparency, drew intense criticism from many, including me, and a statement of conscience from Stan Wawrinka. Plus, Novak has rarely countered the toxic comments that, over the years, his parents have made.

But, goodness, this man with his well-cropped hair, emerged out of war. He’s his home country’s greatest hero, he has performed countless good deeds to aid children, and he works hard to improve his body, mind and soul. In a sport with a fair number of comfortable conformists and a decent dose of hedonism, Nole is a perpetual seeker who wrote a self-help book, visits experimental schools in Bali, climbs French mountains, meditates in Spain, and reflects by the Grand Canyon.

He’s a caring father and family man who’s brought wealth to his clan. His hilarious, spot-on sense of humor is one of the wittiest in tennis history (just ask Maria Sharapova). And, with his genius play, howls and all, he’s entertained millions of fans for 16 years.

But Djokovic has had the misfortune of playing in the considerable shadow of a couple of heart throbs who are of the two most appealing men our sport has ever produced. Certainly he’s been the most dominant player of our most recent era. He’s won 7 of the last 11 Slams, including another impressive performance in Melbourne and a stunning come-from-behind five-set win in the French final. In three days he could win his 20th Slam and continue his quest for the Golden Slam. Many already consider him the best of all time.

Decades ago, the fabled boxer Joe Louis liked to step in the ring frequently. He’d knock out one foe after the other. Rather cruelly, reporters called his victims the “Bum of the Month Club.” The players Nole has beaten this week at Wimbledon and throughout his career are far from bums – they’re  elite pros. But the point is that over the years Djokovic has made many a player – Kevin Anderson, Juan Martin del Potro, Dominic Thiem, Daniil Medvedev, Stefanos Tsitsipas – look ordinary.

One asks, “What makes him so great?” His core strength and Spiderman flexibility, his agile defense, his strong mind, how he instantly goes from defense to offense, his uncanny anticipation and speed, the best return of serve in the history of the game, a backhand to die for, his steely and adaptive match management, his refusal to lose, his experience?

Chris McKendry asked Novak, “What makes you so tough in a five-set match?” He replied, “It’s probably a combination of fitness, experience and self belief. Flexibility – I work to put myself in the best position physically…That’s the foundation. Then comes the experience of playing more than 15 years in Slams and many best-of-five matches. That gives me a confidence and releases me from all that additional pressure. You are confident you can do it, so it’s all about a mindset – how you perceive things on court. I just somehow manage to find a way. Everyone is different, everyone has their own way. Everyone is authentic.”

And that’s not so bad. 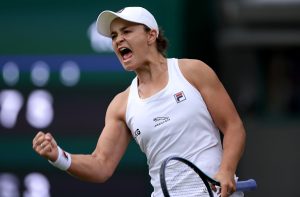 The All-Around Game and Goodness of Ash Barty

Early in her career, young Barty was burned out on tennis and sought refuge in professional cricket. There, she soon got the locker room camaraderie she craved, and drew praise as a gifted all-rounder. That is, a player who could do it all, both batting and bowling. Now, as a tennis player, she’s the greatest all-rounder in the women’s game.

No, we’re not talking about her unique 2021 around-the-world “Gee, I wish I had her mileage points” jaunt that over nine months should be taking her from Brisbane to Miami, from Charleston to Madrid, from Paris to London. Then to Japan, America, Europe and possibly back to Asia before she finally returns to Brisbane. What a road warrior!

When we talk about her being an all-rounder, we’re primarily referring to her incredibly versatile and all-around game. Ash does it all. The Miami Open champ is good on all continents and all surfaces. She won the 2020 French Open on clay, but many say grass is her best surface. She uses her strokes, her mind, her experience and her guile to put her foes on the defensive. Finesse and flow draw our attention.

Her backhand slice is a wide-ranging stroke she uses to move her foes to the corners, to lure them in, or simply as an adept defensive tool. Her forehand is a power weapon. She had 38 winners today and blasted 8 aces. Her underrated serve has pop.

All the while she called on virtually every tool in her toolbox to down the resurgent three-time Slam winner Angie Kerber 6-3, 7-6 to reach Saturday’s Wimbledon final. There she’ll meet Czech Karolina Pliskova, who outlasted Belarusian Aryna Sabalenka 5-7, 6-4, 6-4.

Kerber conceded that in today’s semi, Barty had the upper hand. “She always had a good answer. Her game suits the grass really well. She played great in the important moments. That was the key at the end…She’s really intelligent and she knows how to play with her slice, and then she’s going forward with her forehand. She really served well…She has a lot of confidence. She’s played a lot of big matches. She’s the No. 1 player.” Kerber added, “Only two or three points made the difference, but Ash was willing to take risks and go for it.”

Barty’s first-ever Wimbledon final will have an historic undertone. Fifty years ago, in 1971, Wimbledon champ Evonne Goolagong became the first, and still only, Aboriginal to win a Slam. Barty is wearing a FILA dress to honor the beloved Evonne, who was known for her graciousness. How fitting it would be if Barty, who is of Aboriginal heritage and a spokesperson for Aboriginals, took the title. You could say it would be one heck of an all-round triumph for the all-round star of women’s tennis.