A long while ago some British singers told us “All you need is love.”
In this sometimes harsh world, it’s still true. And may be more than ever.

The bottom line is that every child deserves a home and love. And fate is involved in all of this. Actress Nicole Kidman said, “Somehow destiny comes into play. These children end up with you and you end up with them. It’s something quite magical.”

Also quite magical is the 57-year run of the Roy Emerson Adoption Guild Classic, which is held on three days over Memorial Day weekend. A labor of love put on by the guild in support of Holy Family Services, the tennis happening is at Newport Beach’s beautiful Palisades Tennis Club and The Racquet Club of Irvine. The always-fun event has $15,000 in prize money and a wide range of singles and doubles competitions for different levels and age groups, including a new 50 and Over division. Plus, there will be the always wonderful talk by two-time Wimbledon champ Roy Emerson, as well as a lovely champagne brunch and raffle. To enter go to adoptionguild.org. 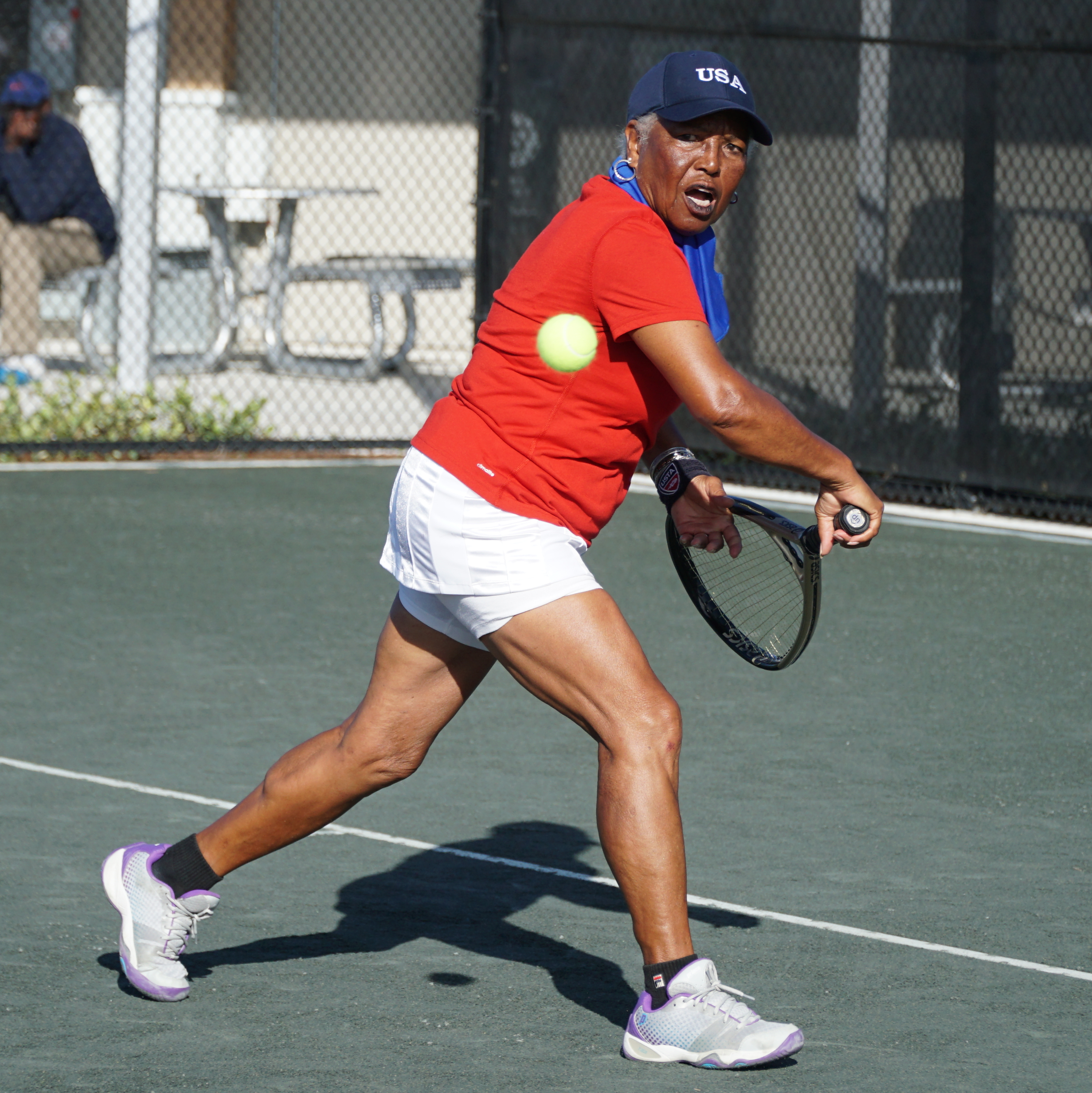 SoCal players won gold balls in every age division from 35 to 90, and several family events. Twenty SoCal players represented the US internationally, with half winning medals. At the top of this pyramid stand Roz King (see Player of the Year) and Tina Karwasky, winner of eight national titles, including a Gold Slam in 65 singles. Karwasky lost a mere 20 games in winning all 12 singles matches she contested en route to the Slam. She also won the 65 Hard, Indoor and Grass doubles and the 60 Grass doubles.

Oren Motevassel (Rancho Mirage), dominated men’s 50 singles nationally, winning the the Clay, Hard and Indoors. He was a doubles finalist twice. Mike Fedderly (Palm Desert) and Bill Moss (Malibu) took different approaches to winning gold medals at the ITF World Championships. Moss played No. 2 on the USA Austria Cup (M55) that won the ITF Worlds. Fedderly missed the Cup but won the 128-player individual singles and was a doubles finalist with Mike Tammen (OR). Fedderly won gold balls at the 55 Hard and Clay in doubles (with Tammen). Lloyd Goldwater (Pacific Palisades) won the Hard Courts, beating Lester Sack (LA), though Sack turned the tables in the Clay final. He was an Indoors singles finalist. Saul Snyder (San Diego) won the 85 Hard singles and doubles (with Roger Hing, Fountain Valley).

For Millie Yablonicky (Encinitas) it was a year of firsts: first Cup team; first time winning two gold balls in a year (the 35 Hard with Mariel de Young (Carlsbad) and 40 Indoor doubles); first year in the 40s. Dina McBride (Stevenson Ranch) won the 45 Hard singles only nine months after severing her achilles in the final of the 40 Hard Courts, and was a finalist in 35 Hard doubles and Mother/Son Hard (played in May). Ros Nideffer (San Diego), 57, won the 50 Hard singles and doubles (with Debbie Spence-Nasim, Carlsbad) and led the US to runner-up in the Maria Bueno Cup (W50)i. She was a Worlds finalist in 50 singles and doubles (with Gretchen Rush, TX).

Nathalie Herreman-Bagby (Pacific Palisades) won her first gold ball, with Alissa Finerman (Santa Monica) at the 50 Indoors. Finerman teamed with Ralph Finerman (Pacific Palisades) to win the Father/Daughter 80+ Hard for the second time, over Carolyn Nichols (Rancho Santa Fe)/Graydon Nichols (NorCal). Nichols won the Clay and Indoors doubles (with Susan Wright, CO) and Hard with San Diego’s Robin Harris and was a Hard and Clay singles finalist. Suella Steel (La Jolla) won two singles and three doubles gold balls in the 75s (singles and doubles at the Hard (with Charleen Hillebrand, Harbor City); singles and doubles at the Indoors and the Clay doubles (with Hillebrand). She captained the winning USA Queens Cup (W75) and won a silver (with Hillebrand) and bronze (with Karel Placek, Del Mar).

The Settles family (Claremont) was hugely successful: Kathy and Christian won the Mother/Son Hard while Paul and Kathy won the 100+ Husband/Wife at the Hard, Indoor and Grass.

ROZ KING, PLAYER OF THE YEAR
Six gold balls, two world gold medals…what a year Roz King had! The vibrant nearly-80-year-old described 2017 as a year where everything fell into place. King won the singles and doubles at the three USTA nationals she played, the Clay, Hard and Indoors, and won the ITF World Team and Individual Championships. She beat her good friend and doubles partner Dori DeVries (Reno) in the final of the Clay, Hard and Worlds.

King compares her year to 2013 when won the ITF 75 singles, saying she has a “better understanding of the game, of what I need to do” and more “belief.” Her goal is to be playing into her 90s. In between tourneys, she drills frequently and plays league doubles. When not playing tennis, she plays bridge competitively and gardens. 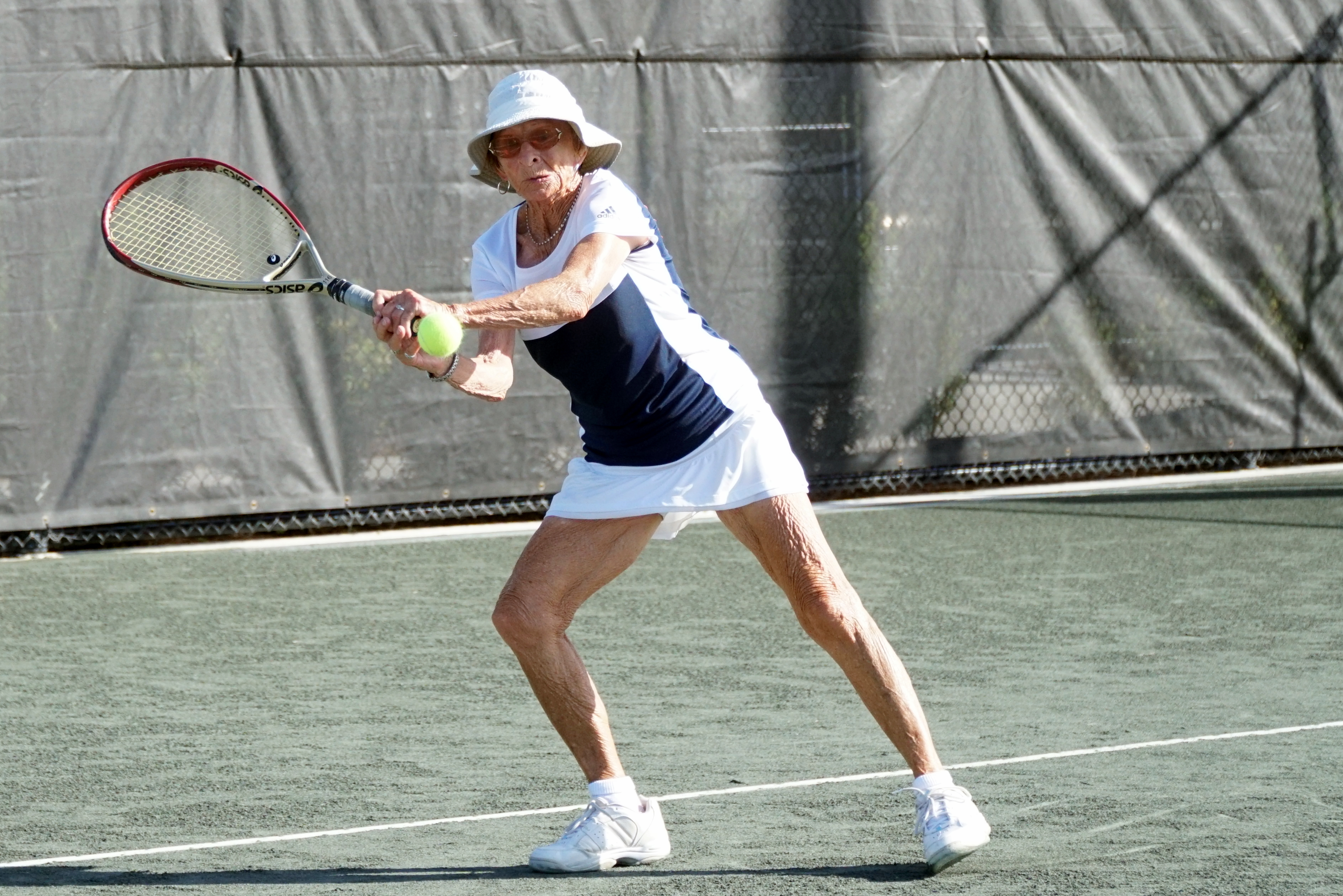 NorCal players traveled far and wide in 2017. Dori DeVries returned to NorCal (Reno) from SoCal, scooping up three gold balls and a gold medal (see Player of the Year). Betty Cookson (San Mateo), 95, and playing with a new knee, won all three 90s doubles crowns (with Rita Price, CO) and took a bronze at the 85 clay. Betty is a living example of tennis being a lifetime sport.

MEN: Daniel Grossman (Tiburon) won his first world title in Orlando, teaming with Andrew Rae (Australia) in the men’s 65. The next week Grossman and Rae won the Clay 65 doubles. Internationally Grossman won 55 doubles titles with Polo Cowan (Tiburon) in Spain, Italy, Peru and Chile and ended the year ranked No. 2 in the world in 65 doubles. Cowan is No. 2 in 55 doubles.

Doug Ditmer (San Ramon) teamed with Randy Berg (SoCal) to win the 60 Hard. At the World Championships he earned a bronze medal (with SoCal’s Andrew Stanley) in 60 doubles.

MIXED: Kurt Chan (Gold River) dominated the two nationals he played in 60 mixed, the Hard, with Susan Wright (CO) and the Indoors, with Jennifer Shorr (WA) against Wright and her partner. Linda Bucklin (Mill Valley) won the 70 Hard with Frank Zebot (SoCal).

FAMILY: Charlie Hoeveler (Ross) had his usual success in Super Senior (70+) Father/Son. This year he won the Hard with Justin (San Francisco) and was a grass finalist with Charles (Ross). Also successful in family events were Brent Abel/Mai Ichikawa-Abel (Moraga), taking home silver balls from the Clay and Grass in Husband/Wife 100+. Mai also won bronze at the 40 Indoors doubles. Graydon Nichols (Hanford) (with Carolyn Nichols, SoCal) finished second at the 80+ Father/Daughter. Graydon is 92. He also won the Asics 90 singles.

DORI DEVRIES, PLAYER OF THE YEAR

Dori DeVries is 80 years young. She won a Gold Slam in 2016 (all four 80s national championships in singles) and followed it up in 2017 by winning three gold balls (including the Grass singles) and reaching the finals at the Hard and Clay, where she was thwarted by her friend and doubles partner, Roz King (San Diego). For DeVries, 2017’s highlight was helping the USA win the Doris Hart Cup. She won her singles point and the deciding doubles with King to clinch the title.

DeVries is motivated by a pure love of hitting the ball, and the fun and camaraderie she experiences with her tennis friends. On a typical day she spends an hour exercising before hitting the court. And after a tournament? She has a margarita, and King a martini. 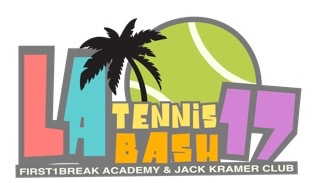 The historic Jack Kramer Club in Rolling Hills Estates plays host to this year’s Los Angeles Tennis Bash on the morning of Saturday, December 9, with a series of clinics and games for juniors and adults to raise money for SoCal-based First Break Academy.

As its name suggests, First Break Academy gives children an initial experience with tennis while also allowing for other forms of play. “For the past few years, First Break Academy has brought children to tennis who might otherwise not have been exposed to the sport,” says Shriver. “Multi-sport play like basketball is merged into early tennis instruction with great success. it’s a win-win model.”

First Break Academy’s Executive Director Peggy Bott is grateful for the contributions of this year’s renowned volunteers, and she has her eye on the organization’s future. “We have made tremendous strides in a short time,” she says, “and wish to build and continue to fund scholarships for dedicated youth who attend our tennis and learning programs.”

After 40 competitive seasons as the Head Women’s Tennis Coach at Loyola Marymount University, Jamie Sanchez is taking his wealth of experience and everlasting passion for the game to its sister institution, Marymount California University.

Since 2006, both the men’s and women’s tennis programs at MCU have been inactive. Enter Sanchez, who will rebuild these programs and take over as the head coach for both teams. “I am really excited about starting two tennis programs at such a great university,” he says. “I hope the part I take in establishing these programs in the greatest sport ever can mirror the growth and insight that the University has for lifelong learning.” 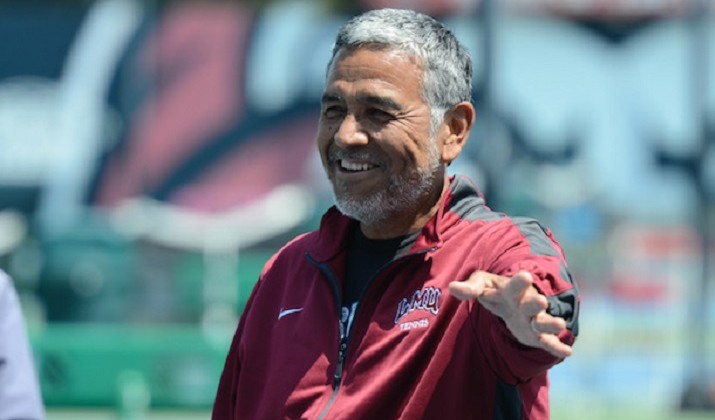 Ironically, this role comes full circle to Sanchez as he implemented the women’s tennis program at LMU those many years ago. The 2017-2018 season at MCU will be dedicated to recruiting, with the official launch of both programs in the fall of 2018. “I’m actively reaching out to all the junior colleges,” says Sanchez. “My emphasis is on connecting with the tennis community in Southern California and more prominently the Catholic schools and any and all high schools in the 30-mile radius, without excluding anyone else. Community colleges in SoCal are part of the outreach.

“I’m also going through the channels of the SCTA, reaching out to the players through that conduit – all of the tennis families, and kids that are involved in tennis in general. It’s a combined effort – we’re trying to start two programs, but we also need to inform people that Marymount California is starting a tennis program. People are still finding that out.”

Embracing that “growth is a part of change,” Sanchez is an ideal figure for this type of outreach because his love for tennis runs so deep. “Here’s the thing about tennis – I’ve always had a passion for the sport itself,” he says. “I’m an unlikely candidate for the sport because I played football all four years of high school and didn’t play tennis until senior year, I was a late arrival to the game. I played college football and tennis all four years of college. It’s a lifelong sport – at no matter what level you partake, it’s enjoyable and rewarding. That’s been the catalyst and I find it very exciting to be doing it here.”

Sanchez is looking forward to forging new connections, both in and out of the new programs, and he welcomes hearing from all those who are interested. “There are so many ways to reach out and make sure the word is spread,” he says. “I’m open to and I’m really looking forward to people contacting me. They may not end up coming here and that’s ok. Just reaching out and making the communication is of utmost importance for all those who have a common bond, and that’s the game.”

ABOUT US
The award-winning Inside Tennis, now in its 39th year, is published seven times annually and is known for its creative, cutting-edge content and superb photography. The San Francisco Chronicle called Inside Tennis "the most informative tennis publication in the English-speaking world," and tennis commentator Wayne Bryan said the magazine is "No. 1 in writing, insight, class, heart and love for the great game."
Read more...
FOLLOW US
© 2017 Inside Tennis.