It was a night for the ages. Two young African-American sisters named Venus and Serena faced off in a prime-time battle under bright lights before a packed, celebrity-laden crowd at the 2001 US Open final.

60 Minutes broadcaster Ed Bradley captured the moment: “You’ve got this sport that used to be so lily-white, and you have two African-American women playing for the title in Arthur Ashe Stadium, and the stadium next door is Louis Armstrong Stadium. That says it all. Arthur Ashe is smiling.”

David Dinkins was smiling, too. After all, this was just one marker in a sport in which Blacks and African-American culture have played a huge role.  From Althea Gibson and Arthur Ashe to the Williamses and Coco Gauff, Black lives have mattered mightily.

As a young aspiring politician, he helped the USTA move from Forest Hills to Flushing Meadows. New York entrepreneur extraordinaire Skip Hartman noted, “In a city where parkland is as sacred as Indian burial grounds, David vastly increased the land available to the US Open and established a 99-year lease.” Now the Open could breathe. “Without him,” noted Hartman, “There would be no US Open.”

Dinkins was the first and only African-American mayor of New York, and in his last months in office he negotiated a critical contract with David Markin of the USTA. At a time when other cities like Atlanta and Chicago were courting the US Open, Dinkins managed to get the Federal Aviation Authority to alter the invasive flight patterns from LaGuardia Airport that had long blasted the US Open. To this day the Open is known for its roar. But the explosive sounds of the jets often turned a pleasant game of tennis into an audio hell.

Dinkins quickly grasped the enormity of the flyover problem and made a big agreement with the FAA that essentially saved the Open for the Big Apple. New York City would get a portion of the US Open’s revenues, but the USTA would collect $300,000 for every flight that passed over the Open. The USTA has never collected that fee, while the Open has become a financial boon for New York, each year earning more than the Yankees and Mets together. 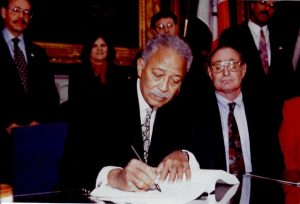 Still, incoming Mayor Rudy Giuliani bristled. A rabid Yankee fan, who wanted to distance himself from his mayoral rival (whom he’d lost to once and then beat), Giuliani battled to undo the $300,000 fine. Reportedly he insisted that if the clause calling for a fine was not rescinded, there would be no Open. He told the USTA he would not issue a permit and would go to the unions and have electricians do slow-downs. Giuliani failed. Still, he’s the only mayor in recent decades to never attend an Open.

Dinkins first got tickets to the Open when he helped move the tourney from Forest Hills in 1978. After that he was a fixture there, always receiving warm ovations from appreciative fans. He’d play with his pal, Monica Seles. Again and again, he’d joke from the President’s Box, “I’m Serena’s coach.” Williams playfully concurred.

A political pioneer, Dinkins emerged in an era when many an African-American mayor like Atlanta’s Andrew Young and Oakland’s Lionel Wilson were into tennis. But no politician has loved tennis more than David.

He played a little as a teen, and took it up again at 40. He and Skip Hartman would put up a net at New York’s Robert S. Wagner Middle School early in the morning and, to the wonder of an array of onlookers would play. Dinkins, who was taught by Dennis Van der Meer, eventually upgraded his suspect backhand. He was often spotted on Big Apple courts, from Central Park to Roosevelt Island to down by Gracie Mansion.

He loved kids, and his wallet bulged with photos of children who weren’t even in his family. He asserted, “I maintain that we don’t own this planet. We hold it in trust for our children.” He was a dear friend of Arthur Ashe, and backed the icon’s NJTL initiative, that has changed tens of thousands of lives.

He was a strong, bright politician, yet always had a quiet smile. When I spoke with him about Ashe, or who he thought was going to win the final, he always seemed so comfortable in his own skin.

Incredibly, Dinkins served on the USTA Board for 12 years and worked hard within the group to heal rifts between its professional and recreational sides. He was long a mentor of Katrina Adams, the first African-American USTA President, who headed the group for four years.

After his passing this week at age 93, Adams tweeted, “This man was the most #supportive #inspiring #motivating person that I knew. He was my 2nd father and my biggest cheerleader…You gave us your all.” Billie Jean King called him “a champion of the people.” Chanda Rubin noted he was “a true warrior and a gentleman.” 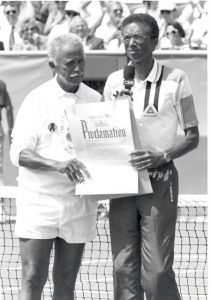 Former USTA President Alan Schwartz noted, “Very few other people cared more about tennis and saw it as a vehicle for serving underserved youngsters. And very few did more for the game, with his decision to help us go forward with the US Open, despite Giuliani.”

At Ashe’s memorial service, David said, “Fact is, Arthur was just a plain better person than the rest of us.” For tennis lovers, there was no better politician than a one-term mayor who seemed to be by our side forever, a man who cherished children and adeptly promoted the game he so loved. The Open will not be the same without him.