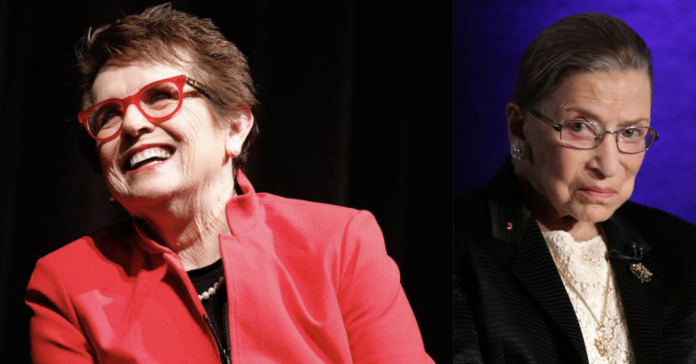 In Court and On Court, the Supreme Gifts of Ruth Bader Ginsburg and Billie Jean King Transformed Our World

“I ask no favor for my sex. All I ask of our brethren is that they take their feet off our necks.” – Sarah Grimke, 1837

Both Billie Jean King and Ruth Bader Ginsburg were feisty young girls with a vision that women could perform on or in a court.

In the 70s, men’s tennis made clear its broad understanding. Billie Jean knew well that gals would be paid only one-twelfth of what guys got. Bobby Riggs would later tell King she should stay in the kitchen.

To young Ruth Bader Ginsburg, the legal system was rigged. Women weren’t getting enough credit to get decent jobs as lawyers, let alone their own credit cards or loans. Not only sports, but the legal, economic and political systems of the 70s were, in large measure, closed to women. But a couple of trailblazers, Kiki and King, had other ideas.

In Los Angeles, 12-year-old Billie Jean had an epiphany. She told her mom that she wanted to fight for equality the rest of her life. Her mother said, “Fine. But first finish the dishes.”  Soon a powerful tennis boss told the tomboy to forget about being in a group picture because she didn’t have a proper tennis dress. Then again, back then women were often out of the picture.

In Brooklyn in the 40s, Ruth’s mother taught her appropriately nicknamed daughter Kiki to always be a lady and always be independent. The Cornell-bound, frequently rejected girl eventually morphed into “the Notorious RBG” who used her words and intellect to turn American law on its stuck-in-the-mud, patriarchal head. Eventually she left New York for Washington DC and went on to become the second female Supreme Court Justice.

BJK would end up living in New York, but not before stirring up a barrel full of “good trouble.” Out of nothing, she forged a tennis circuit for women that, beyond anyone’s wildest hopes, thrives to this day. When she prevailed in the most hyped match in tennis history, humbling that perfect chauvinist foil, Bobby Riggs, the gender landscape shifted. After that, whenever there was a battle to be fought – defending Title IX, equal pay, same-sex unions or Black Lives Matter – King was at the barricades.

While Billie Jean became known for her snappy three initials, BJK, and her edgy nickname, “Mother Freedom,” Ginsburg became known as RBG, and later as the cheeky moniker she relished: “The Notorious RBG.”

A brilliant legal mind, the aspiring lawyer said she faced three hurdles: being a woman, being a mother and being a Jew. Similarly, King, a painfully outed lesbian who’d been reared by a conservative Methodist family, was a fireman’s daughter trying to rise in a country club sport who repeatedly faced daunting obstacles.

Back then, women were told to just get along. As a collegian, Ginsburg was savvy. At first she hid her smarts. King did the same thing. The duo, as pioneers holding up lanterns in the darkness, always saw their situations as opportunities to slowly, patiently and – very carefully – teach. Ginsburg quipped, “I did see myself as a kind of kindergarten teacher, because the judges didn’t think sex discrimination existed. One of the things I tried to plant in their minds was to think, ‘How would you like the world to be for your daughters and granddaughters?’” And no one in tennis has taught us more lessons than King.

King’s message was that women could excel at sports. They weren’t against men, they just wanted the opportunity to show their skills and prove their merit. In the 70s, King became the first athlete to reveal that she’d had an abortion. It was devastating. For her entire career, Ginsburg clearly asserted women’s right to choose.

One morning when I was covering the Indian Wells tennis tournament I walked into a local gym and there was Billie Jean working out. I was surprised. Then I thought, “Of course, this woman has endured eight knee operations. Naturally she works out.”

RBG’s longevity was a political issue in itself. Her fierce fitness regimes were legendary. And though far from being a storied athlete, she had a remarkable sports connection. In 1972, a year before King won The Battle of the Sexes, Ginsburg won her own tennis battle.

Abbe Seldin, a fine 15-year-old player, had been banned from Teaneck, New Jersey’s high school men’s tennis team. Ginsburg, then a volunteer ACLU lawyer, was part of a team that filed a lawsuit claiming the rules banning girls from competing alongside boys violated the equal protection clause of the 14th Amendment.

But the chief of the New Jersey State Interscholastic Athletic Association claimed there were physical, psychological, and practical issues with having a girl play with boys. For example, he argued, it would be difficult to treat a girl for injuries, like leg cramps, if there were no other women around.

Seldin recently told the New York Times that she’d had four long phone interviews with Ginsburg that were full of “probing questions, gentle reassurances and generally positive feelings.” Seldin said, “She asked me, ‘How do you feel about going through with this?’ And I said: ‘I want to do this. I really want to do this. I want the competition.’”

The State of New Jersey reversed its position and, in an ironic twist three years later, none other than tennis pioneer Althea Gibson became New Jersey’s State Commissioner of Athletics, and served from 1975-85. Seldin went on to play for Syracuse University and became a teaching pro.

Of course, Ginsburg and King had their differences. While RBG’s legal opinions reverberated loud, she was the essence of an introvert. Reserved and quiet, she was as chatty as a law library. Big ideas, not small talk, were her currency.

Billie is an effusive, curious and unsinkable extrovert who invariably lights up a room, whether it be a CNN studio, a 23,000-seat New York arena or Wimbledon’s oh-so-proper Royal Box. RBG famously asked probing questions of the Supreme Court bench. Billie Jean constantly asked questions. In 40 years of covering tennis, I’ve never encountered a more curious and restless mind. No wonder a magazine headline once blared, “Go for it, Billie!”

Not surprisingly, in a time when many crave heroes, the legends of these dynamic and adeptly branded cultural icons have been exploding. Goodness, how many public figures become rock stars in their eighties? And just last week, the prestigious international Fed Cup renamed itself. It’s now the Billie Jean King Cup. While Ginsburg was once banned from the Harvard Law Library, Long Beach California’s 300,000-book library is named for King.

While both RBG and BJK were singular game changers, they never stood alone. Both Ginsburg’s husband and enabler Marty and King’s longtime partner and backer Ilana Kloss were bedrocks, essential to their success. And while Ginsburg said, “Fight for the things that you care about, but do it in a way that will lead others to join you,” Billie Jean has fought forever to make tennis a team sport, and she’s long collaborated with many key allies, from Rosie Casals, Gladys Helman and Joseph Cullman to the Williams sisters and ITF chief Dave Haggerty.

Neither BJK and RBG had time for wasted anger or needless divisions. While liberal Ginsburg was famous for her mind-boggling across-the-aisle friendship with the conservative kingmaker, Justice Antonin Scalia, the supposedly bra-burning King became dear pals with that most endearing of all male chauvinist pigs, Bobby Riggs.

Ginsburg claimed, “The gender line helps to keep women not on a pedestal, but in a cage,” and then went on to construct an entirely new legal arena. King changed the very nature of sports. Yet both were feet-on-the-ground realists and brick-by-brick gradualists who insisted on taking one step at a time. Still, they were also sublime, big-time performers who lit up mighty stages and seized the moment to change society. Billie Jean’s motto is, “Pressure is a privilege.” Can there be anything more nerve-wracking than a 40-year-old woman arguing her first case before an all-male Supreme Court?

Both were competitors who won. Ginsburg prevailed in five of the six cases she argued before the Supreme Court, and King not only collected a record 20 titles at tennis’ supreme court, Wimbledon, she’s the namesake of America’s supreme tennis center, the Billie Jean King National Tennis Center.

Just after RBG passed, BJK tweeted, “My Shero, Ruth Bader Ginsburg, has died. To pay tribute, those who believe in equality & freedom must fight for the ideals she championed. For her. For us. For generations to follow.”

Ultimately what drew us to this dynamic duo was their indomitable spirit, their will, their unrelenting ferocity, and a clear, unwavering vision that led the way and wouldn’t be denied. They used their brilliant skills and an awareness of the moment to step up and hit winning volleys or argue winning points. And, whether in a legal court or on a tennis court, there’s hardly a more supreme gift than that.