It was just one of those fun conversations that fills the gaps in long matches. After John McEnroe went on about how linespeople were no longer needed, Chris Fowler then spoke up, so to speak, for humans. He said having real people out there is “part of the theater.” But men’s Slam tennis has never seen shocking theater quite like Novak Djokovic’s stunning default today.

Of course, we can hardly forget that we are now living in a surreal world where reason has lost all its muscle. Halfway through a mind-boggling, game-changing Slam without any fans, one thought nothing weirder could happen at the tourney. Still, from top officials to fans and the media, there was an uneasy feeling. We were only half way through the strangest tourney in tennis history. Could the weird get even weirder?

All of tennis knew well that No. 1 Novak Djokovic, who has won five of the last seven Slams, was undefeated this year. The best hardcourt player of our era and the only major winner left in the draw was more than a prohibitive favorite. Except for Rafa at the French Open, there had never been a clearer shoo-in.

Then again, no other player since founding mother Billie Jean King has so stretched tennis’ limits. Djokovic helped oust former ATP chief Chris Kermode and was said not to have been transparent about what  happened. He was the target of an extraordinary statement of  conscience by Stan Wawrinka relating to how he handled the Justin Gimelstob incident. He promoted the Adria Tour that went off the tracks and he and his wife got COVID-19. After a prolonged effort, with Vasek Pospisil, he created a new player association. And in the US Open warm-up tourney, he also threw a racket. Had the man who grew up at a Serbian ski resort become a superstar who somehow found himself ahead of his skis?

Pam Shriver noted, “You can only do so much as a human being before you get stretched too far, and what I’ve noticed…is that Novak has been angry, and has been not quite himself. Even though his game has been quite on point, I never felt his temperament or his mindset was quite right, which is understandable, given all of us are trying to get a hold of our mindset and stay on course.”

Novak twice said that, due to the Adria tour, there was a witch hunt against him. Still, through all the noise, Novak seemed to thrust his chest out and confidently navigate in his bumpy world. Apparently the man was on cruise control en route to not only gaining his eighteenth Slam, but continuing his historic journey to become the GOAT. The conventional wisdom was that only Novak could beat Novak.

Earlier in the tourney, fan darling Naomi Osaka flung her racket across the court. No harm, no foul. She played on. Sunday, in his fourth-round match today Djokovic hit a ball in anger at a side wall far from people. Nothing happened. But later, when with his foe Pablo Careno Busta was about to serve for the first set, he struck a ball to the back wall of Ashe Stadium that struck an unsuspecting lineswoman in the throat. She fell to the ground. Gasping for air, she cried out in agony. Not since Monica Seles was stabbed in the back in Hamburg by a crazed Steffi Graf fan in 1993, or since Denis Shapovalov blasted a ball at a 2017 Davis Cup match has there been such a shocking, big match moment. Then again, this is New York. Here, a Stefan Edberg serve knocked over a linesman, who would soon die from his injuries. And the 2018 Serena-Osaka final was as dystopian as a match could get.

Djokovic pleaded his case. “You can give a game penalty, you can give a set penalty, you have many options.  She  doesn’t have to go to the hospital or anything. Why are you   going to choose to default for a situation that  happened to me for the first time in my career, in a Grand Slam, on Center Stage? 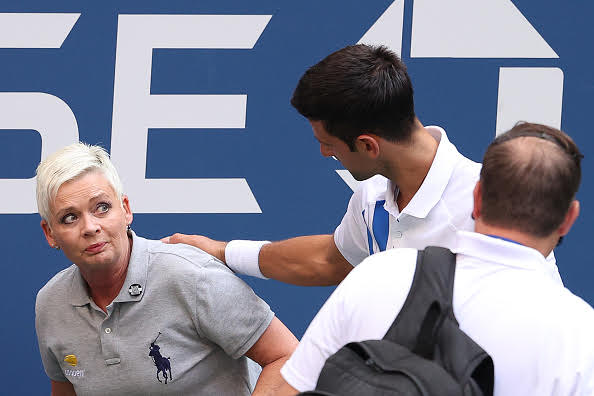 Now, the US Open has a totally different complexion. A player outside the Big Three will prevail. No Slam champions remain in the draw. The top seeds in both women’s doubles (Kiki Mladenovic and Timea Babos were withdrawn for COVID related reasons) and the top men’s seed will not be able to play for the title. Ironically, Djokovic’s departure not only opens the draw for the long frustrated German, Alexander Zverev, but for Shapovalov himself, who might have had to face Djokovic in the quarters. Novak will lose all of his ranking points and the $250,000 he would have earned and he has been fined   $10,000.

Journalist Jose Morgado said, “This is one of the most incredible things we’ve ever seen on a tennis court.” Jon Wertheim claimed, “This was a potentially historic unforced error.” James Blake contended, “Playing with fire can be dangerous. Even if it’s just a small chance, that is the chance you take and those actions have consequences.” Chris McKendry noted, “This will never be forgotten by Novak – or by journalists.” Rennae Stubbs said, “All players have to realize their tennis environment.”

It was a terrible lapse by the 17-year veteran. But the rules are crystal clear. You cannot violate an official’s space, let alone hurt them. Billie Jean King spoke for everyone: “First, I hope the line judge is okay.” Stubbs added, “The moment you hit a ball in anger, if you hit someone, you are done.” Cliff Drysdale said he had “an empty feeling.” Some asked whether the incident will affect the presence of linespeople on courts.

“I’m just gutted right now,” confided  Bethanie Mattek-Sands. “For me it hurts because it’s tennis. We all love seeing Novak with this winning streak…He’s charismatic. His game style’s great to watch. It’s more about being sad for the tournament – what a tough situation…Tennis is a sport where you don’t have a lot of outlets…We internalize a lot of things…At the end of the day, you just know you don’t go whacking balls around the court. We’re all still in shock.”

Michael Mewshaw contended, “This is one of the proudest moments in tennis history…I could tell you of over a dozen incidents when the Code of Conduct has not been enforced and where players have not been defaulted. Too bad it had to happen to the Joker, but bravo for tennis.”

John McEnroe said, “It sucks, is the bottom line…it was a rookie mistake…It’s amazing how frustrated he’s been…the pressure just got to him…Whether he likes it or not, he’s going to be the bad guy the rest of his career…this is a stain he is not going to be able to erase…I”m amazed he did something as boneheaded as that…it’s inexplicable…I don’t understand why he didn’t go to the press…You got to man up there. I can’t imagine that this won’t hit him hard.”

McEnroe noted that a rule is a rule. Then he waffled, saying that since the lineswoman was now OK, and Djokivic didn’t intentionally hurt her, you would think they would “figure out a way to keep an all-time great player going after history on the court.” Chris Evert strongly disagreed, and James Blake added, “I appreciate the effort for equal treatment to all players.” Alexander Zverev said, “Novak is going to be a little bit upset, I think.” The whole tennis world is. After all, as Chris McKendry said, “This changes the course of history.”

For his part, after refusing to talk with the media, Novak immediately went to JFK Airport. He issued a reflective statement that said many fine things. Although, in a key part, critics noted that it referred to his “disappointment.” “The whole situation,” Novak wrote, “has left me sad and empty…Thank God she is feeling OK…I‘m extremely sorry to have caused her such stress. So unintended. So wrong…I need to go back within and work on my disappointment and turn this all into a lesson for my growth and evolution as a player and a human being. I apologize to the US Open and everyone associated for my behavior.”