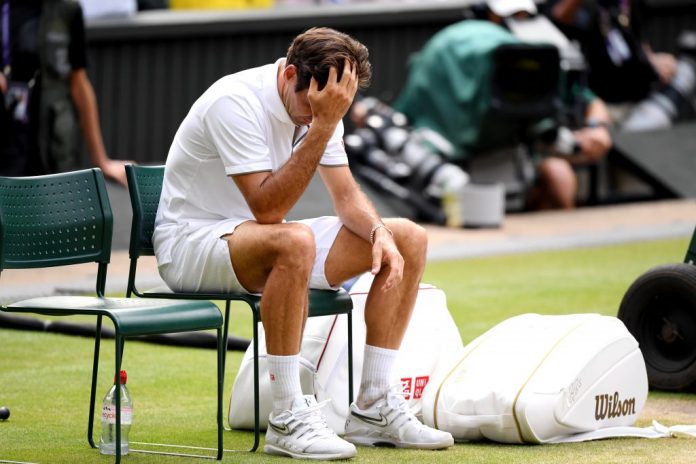 Wimbledon this year had already given us so much high drama: a kid named Coco had brought magic, Sir Andy Murray had returned, Simona had scampered to victory, Serena had failed to hold serve against history, and a Roger-Rafa semi had soared. But now the old place was outdoing itself.

The still-marvelous-after-all-these-years All-England Club gave us the ultimate – a Wimbledon final that went into a fifth set. Tennis’ highlight reels are packed with images of unforgettable matches from this place. There was Andy Roddick’s “coulda, shoulda, woulda” 16-14 shortfall to Federer in 2009. Goran Ivanisevic beating Pat Rafter in a raucous Monday final in 2001 in front of rabid fans right off the street. And, of course, there was the best match of all time, Nadal’s “Strokes of Genius” 2008 win over Federer in the dusk.

Today the light was golden, and two bright beacons of this golden age battled in a back-and-forth brawl that, according to Radio Wimbledon, will “be right there in the pantheon of tennis’ greatest matches,” maybe somewhere just behind Nadal-Federer, Borg-McEnroe or Don Budge-Gottfried Von Cramm.

Novak Djokovic’s epic 7-6(5), 1-6, 7-6(4) 4-6, 13-12(3) win ebbed and flowed. The longest match in Wimbledon made it clear: this is the best tennis has. The sport gave us stunning exchanges, dazzling shot-making, steely nerves, razor-thin margins and more reversals of fortune than the most inventive soap opera.

Amidst stab volleys and deft drop shots, an age-defying icon, who in jolly old England seems to be worshiped with an almost religious fervor, controlled much of the tempo and rhythm of the match. But it was the high-torque dash, twist and blast of Novak Djokovic, with his uncanny returns and laser backhands, who won four straight points to gain the first set tiebreak 7-5.

You thought the Serbian would now defend his title. He was not only well on his way to winning the fourth of the last five majors and his sixteenth Slam overall, he would probably now gain his fifth Wimbledon trophy to tie Bjorn Borg.

His effort seemed superhuman. But actually the shorthaired fellow with the long resume is human. He slipped and fell to the turf and then his game plummeted too. Federer unleashed a flood of winners, twice broke and raced to a 6-1 second-set win – match on!

Federer gained a crucial set point in the third set. So maybe the 37-year-old would become the oldest Wimbledon winner ever and tie Martina Navratilova’s record of nine titles here? But Djokovic was clutch. He hit a service winner, grabbed the momentum, punched the sky, blasted backhands and defended like a demon as he captured the third-set tiebreaker 6-4.

As the plot thickened, the atmosphere was electric. Proper royals in blue, shrieking Federerians, Serbian loyalists, stern soldiers all relished a show like few others. A duchess gasped. Roger’s wife tried to keep her cool. Henman Hill exploded as Federer roared back to force a fifth set.

Djokovic was ready. He had the upper hand against Roger in a cluster of statistical categories. In the 47 matches they’d played before – in Grand Slam matches, in finals and here at Wimbledon – Novak had prevailed. Still, he knew playing Roger on grass is a kind of a nightmare. He hits out to the lines, he draws you in with soft slices, his volleys frustrate, his serve keeps you guessing. Novak explained that with Roger, “It’s a lot of constant pressure because he stays close to the line…He blocks the shots very well. He anticipates very well. He’s so talented. He’s got a perfect game for this surface.”

Federer grabbed the fourth set. Soon the match became a peak experience. Federer’s variety, power and speed dazzled. Novak’s steel will and sublime craftsmanship made it evident why he’s the best in the world. And he was ready for war. His old coach Boris Becker always said the fifth set is all about the mind.

“Visualization is part of the mental preparation,” Novak explained. “It’s very, very important. I do it all the time…[I] try to play the match in my mind before I go on court. I just told myself before the match, ‘I’m going to try to switch off as much as I can from what is happening around us, and just be present.’…[That’s what] probably allowed me to come back and win…The mental stability in those moments…There is always this self-belief. You have to keep reminding yourself that you’re there for a reason and that you are better than the other guy.”

But the pro-Federer crowd howled in delight. Their bounding boy was in ascendance. At 8-7 in the final set, he gained not one but two championship points. A historic victory was in the great man’s grasp. Yet Djokovic had been down two match points to Roger twice before in Slams and survived.

Then the GOAT blinked. His forehand went wide and Novak hit a brave crosscourt winner. The Serb, so to speak, had cheated death. The players soldiered on to 12-12.

Old court, old stars, new twists, unflinching drama – now traditional old Wimbledon would be settled by a tiebreak, US Open style. And Novak is a wonder in tiebreaks in deciding sets – Roger not so much. Right from the start, Federer faltered. He botched the kind of subtle half-volley that long ago had gained him adoration.

The error doomed him – he fell behind. One of the most dazzling matches soon ended, not in glory, but with a whimper. Roger shanked a forehand. The ball flew up to the eighth row of the stands. In a flash a breathless radio reporter told his Indian audience, “This will go down as one of the greatest matches of all time.” Tennis’ fallen hero was soon being told he was an inspiration to 37-year-olds everywhere. “I gave it all I can. I can still stand,” Roger quipped. He told reporters that it came down “to one shot, I guess – [I] don’t know which one to pick – your choice.”

The first player since 1948 to have more Championship points and still lose Wimbledon was reminded of his 2008 battle with Nadal, and that now he was part of two of the greatest matches of all time. Roger didn’t care. “I am the loser both times. That’s the only similarity I see.”

But not really, Roger. Just like that 2008 battle that has long been memorialized, today’s breathtaking journey of wonder will long be celebrated. After all, as Boris Becker said, “This match gave us everything. It’s why we love the sport.”