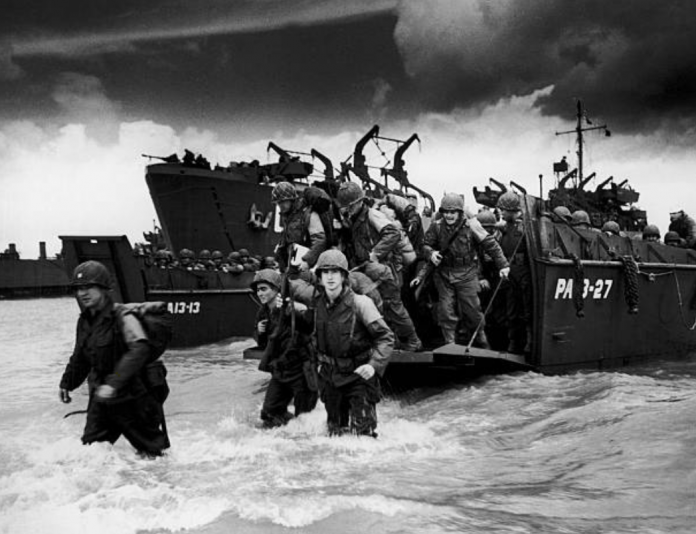 On D-Day, 76 years ago, our nation rose up to combat an evil march of madness, a grip of hatred. That same American tradition of hope and idealistic courage that prevailed 76 years ago on a forbidding Normandy shore has reemerged on the streets of our land as many again try to unravel a daunting wrong. Here is our appreciation of the still informative heroism of D-Day.

Lazy lagoons capture still water. A gull swirls free, the sparrow offers a morning song above cruel hills. Waters, so murky, cling to their secrets by this flat, too-wise beach, where a mighty tide was turned.

The surly crimson pools are unseen; still, the knowing sands harbor a bitter truth, beyond our grasp.

This morning, steel clouds hide a horizon like no other; a horizon that wrought a vast gray armada for the ages: 5,423 ships, one goal.

On that day — “The Longest Day” — boys from Moline and Mobile, the sons of Brooklyn and Burbank, Phoenix and Philly, huddled cold in shivering clusters. Wide-eyed, bone-wet, tossed woozy by the uncaring sea — they puffed their last soggy smokes and whispered muted prayers, final invocations before destiny’s dawn.

What unforgiving fear did they feel? What gut-wrenching terror shook their souls before they strode forth — each one to meet his fate?

Some never reached shore. Packed heavy with battle gear, they sank, a fatal stone descending to an unsparing depth.

Some managed just a single step, dropping to that hard beach. Others scaled storied cliffs, subdued bunkers, or trudged on to wage war in the hedgerow maze, emerging to tell tales— a generation’s pride.

Today, the morning wind is cool. But nothing like the chill of horror that gripped the boys of Omaha on that wide, too wide, beach below cruel hills. Wretched little rises that had turned into imposing peaks; impenetrable bastions raining fire, fierce explosions, tearing flesh — the sea ran red.

Such agony — dreams and destinies ripped asunder — and a shout of death heard by that distant steeple. The mourning dove flees – the world ablaze – chaotic flames tell of the madman’s fury, a potent poison.

So step by terrible step, the battle is fought, the beach is won, a continent is conquered. Step by step, the Nazi knot is undone, and we wake from a twisted dream to again embrace that elusive thread, life’s fragile gift.