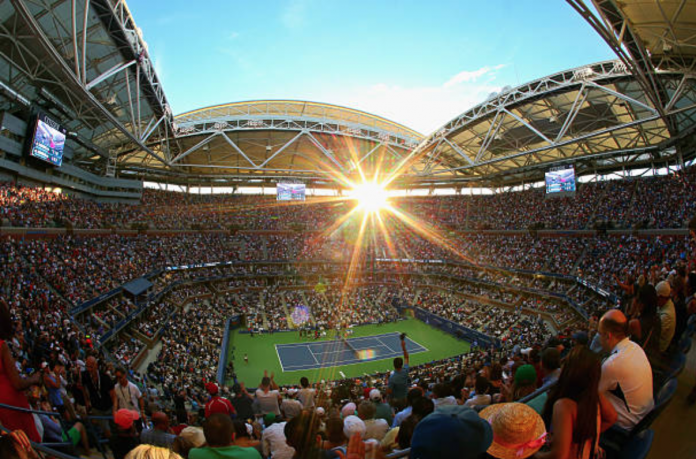 Everybody wants to know. What’s the fate of the US Open? Will there be an open Open, a closed Open or no Open? Will it be in New York, Indian Wells, Orlando or elsewhere?

From the outset, US Open officials were exploring many scenarios. But few gave credence to holding the Open without fans.

Now IT reports that the prime scenario being considered is to hold the Open without fans. Players would have to quarantine for two weeks. They would have vastly reduced support teams. There would be few or no media on hand and press conferences would be held virtually. Gyms and locker rooms would be spread out throughout the facility and seeded players might use luxury suites as locker rooms. Players would go from an inner bubble to an outer bubble – from their hotels to the site and right back.

There would have to be close coordination with the Department of Homeland Security and New York political entities. But that, to a degree, has already been happening. The USTA Billie Jean King National Tennis Center was used for weeks as a medical center.

Of course, this would mean that a tennis tournament would be happening in New York, America’s epicenter of COVID-19. Until recently, the conventional wisdom was that the chances of the Open being staged were slight indeed. But now the thinking is more optimistic. And those percentages might be higher if leading players like Roger Federer and Serena Williams clearly agreed to come. Already, defending champion Rafa Nadal has been reticent about playing for the rest of the year and Novak Djokovic has expressed his much-discussed doubts about taking a vaccine.

As Jon Wertheim noted, a key reason to go forward with the Open is TV revenue. Reportedly, ESPN pays millions more in broadcast rights than the $57.3 million the Open paid last year in prize money. Plus, there are tens of millions more that come in from global broadcast rights and there would be at least some income from sponsors. So even if the Open pays the same prize money as last year, it would be financially worthwhile. The revenue would be a critical factor for regional tennis sections throughout the US. It also would mean that tennis wouldn’t be left behind as other major sports move forward.

These updates are just part of an ongoing, often shifting narrative.

On April 30th top USTA officials told Inside Tennis that the group would be open to holding the Open in Indian Wells. But Twitter reports emerged out of Southern California suggesting that BNP Paribas Open owner Larry Elison would not hold a tournament in Indian Wells until there was a COVID-19 vaccine. Now, many feel there is no chance for the Open to be played in Indian Wells, no matter how appealing the idea might be.

Earlier this week, USTA spokesperson Chris Widmaier said,    “The USTA’s goal is to hold the 2020 US Open in New York on its currently scheduled dates. We understand that there is a great deal of speculation regarding the USTA’s planning for the 2020 US Open. We would like to clarify that while we are exploring every possibility around the US Open, the potential to shift the event location or date is not at the forefront at this point in time.”

Previously, there had been great behind-the-scenes activity. There was a conference call with major league sports leaders and President Trump to discuss the future of sports. But tennis wasn’t in the conversation. Then, according to Wertheim, thanks in part to tennis fan and Trump advisor Lawrence Kudlow, there was a call with tennis leaders, broadcasters, tour leaders and tournament directors and the liaison between the White House and sports programs, Andrew Giuliani.

The leaders, who were seeking federal support, explained what they were doing to help tennis return. Wertheim said that on the call, “There is a range of opinion here. There are some tennis tournament directors who say, ‘Look, until there is a vaccine I can’t have the risk of having an event.’ There are other tournament directors who are very eager to stage their event, even if that means no fans. But again, this was a consultation with the White House and it does seem as if the White House is in favor of tennis going forward under the right circumstances.”

All the while, there are no ATP events through August 2nd and the WTA is postponed through July 20th. The Rogers Cup in Montreal has been canceled and Toronto may well not be played. The Madrid and Rome Masters may be scheduled in the two weeks in September between the US Open and the start of the French Open. And the Asian tour and the critical year-end championships that the ATP and the WTA were planning to hold in London and in Shenzhen are very much in limbo. Australian Open officials, who had to deal with devastating bushfires last January, have long been working on four different models for 2021. But apparently the event will only be held with domestic fans and players would have to quarantine for two weeks beforehand.

While Major League Baseball, golf, Nascar and other sports are taking steps to return, the immediate future of tennis is most uncertain. TV money is not really enough for regular circuit events to thrive. And they require large numbers of fans to support them.

The French Open’s savvy but abrupt unilateral decision in March had the unintended consequence of bringing the men’s and women’s circuits closer together. Now, there is a chance that the ATP and WTA will cooperate more in the future or even unite, but all of that is a long way off since the ruling bodies have to navigate the games’ emergence from this crisis. And, of course, if there is another wave of the pandemic, needless to say all bets would be off.

In the meantime the question remains: will the Open be open, closed or not at all?