The guy in the outrageous pants was a pioneer, a punster, a barefoot contender, a google before there was google, a quipster and comforter who embodied joy.

Bud was the prime pioneer and pied piper of tennis, Collins drew millions to the game. So it was hardly surprising that in 2016 hundreds of devotees descended on Boston to honor the inspiring trailblazer who gave so much.

There were the icons we know well – Billie Jean, Chrissie, Rod Laver, Stan Smith and Pam Shriver. There were voices we recognize in a flash – Carillo, Costas and Enberg – oh my. There were master writers and august publishers and the mighty who rule the game. It was hard to miss the executive directors of the USTA and the Hall of Fame having a ‘pew-side’ chat with the Chairman of Wimbledon’s All-England Club. And there were plenty of ordinary folks too. “I grew up listening to that good man,” said a gray-haired lady from nearby Newton. “I had to be here.”

The celebration was a symphony of sound, emotion and insight. There were harps and violins, prayers and anthems and a well-robed chorus that sang “Swing Lo Sweet Chariot.” Yes, we knew that when they lifted their voices to offer the familiar “Amazing Grace” it wasn’t to honor Federer’s elegance. And when a lady sang “Ave Maria” we presumed they weren’t referring to Ms. Sharapova. Still we chuckled – quite silently.

The throng soon was riveted. It mused on Shakespearean wisdom: “We are such stuff as dreams are made on, and our little life is rounded with a sleep.” And we were reminded of Biblical truths: “To everything there is a season, and a time to every purpose under heaven.”

And in this spirit, just as the service began to tilt, a tad heavy, a rollicking version of “This Little Light of Mine, I’m Gonna Let It Shine” corrected the tone. A cross-court winner at break point – pitch perfect. Sublime vocalists and exquisite flute and saxophone sound meditations inspired the spirit. Then there was old reliable. Tales of Bud’s outlandish pants never to fail to delight. One speaker drew laughs when he recalled that Bud’s outrageous trousers “gave new meaning to the old phrase ‘color TV.’”

Journalist Lesley Visser told the tale of how Bud seamlessly went from print to broadcast journalism, “from being a scribbler to a babbler.” We heard the puritanical yarn of how – when Bud was trying to describe how ecstatic teens were squealing at the sight of tennis heart throb Bjorn Borg, he desperately wanted to use the incendiary term “Borgasm” in his copy. No way – back then the thought police were impenetrable.

It was that he empowered people – whether it was the 400th ranked player in the world, a blind Korean woman he sponsored or that anonymous boy who each night cleaned up the mess we writers left in the Wimbledon press room. Bud was appreciative and the London lad wrote a letter. “Dear Mr. Collins, you are the first person in my life that ever made me feel worthwhile. Thank you, I will never forget you.”

Bud’s friend, writer Tim Leland, asked a simple, but telling question. “Was there ever a kinder, more friendly, funnier or more delightful person?” Chris Evert seemed to answer, saying, “Bud was larger than life, but he had a playfulness and kindness.” She painfully recalled the seven times she suffered devastating defeats in Wimbledon finals. But each time she knew Bud would understand. The man was comforting. He put things in perspective.

Seemingly, without effort, Collins got people to laugh. He embodied joy. Rare was the day that he offered a disparaging word about anyone. Whether on Wimbledon’s Centre Court or in Bhutan or New Zealand – he always seemed to be having a wonderful time. One sensed there was no other place he’d rather be. His delight was infectious.

Yes, he had some mystery. Who doesn’t? Still his essence was a wonder. “His work was marked by a generosity of heart,” noted writer Simon Barnes. “[A] generosity of soul, I should say, perhaps. And that was the man.”

Collins was liberal. He spoke out against war, apartheid, gun violence, environmental silliness and divisive bullying – but often with a disarmingly light touch. When there was much deep thinking about the hirsute Bill Russell becoming the NBA’s first black coach, Collins joked, “Whoops, there goes the neighborhood, a coach with a beard.”

So what kept this man going for well over five decades? Tirelessly he traipsed about the globe seeking what he truly loved – the story. Musicians create their songs. Artists paint. Story tellers have to tell the tales of their days. Billie Jean noted that it was the media that brought the players’ stories to the people. For Bud, the story wasn’t so much about who won, it was about the struggle.

At the end of Bud’s Boston be-in, I felt an uplifting serenity. Appreciations of great people  do inspire. Then, for some reason, before I left, I took a final glance over my shoulder. There – as a jazz band belted out a particularly raucous version of “When the Saints go Marching In” – was Bud’s widow, Anita Ruthling-Klaussen, dancing a lively jig with Billie Jean. And I knew. I knew that certainly the soul of the good Mr. Collins had cycled to a good place. Game, Set and Match – Bud Collins. 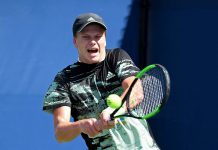 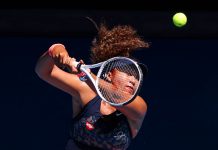