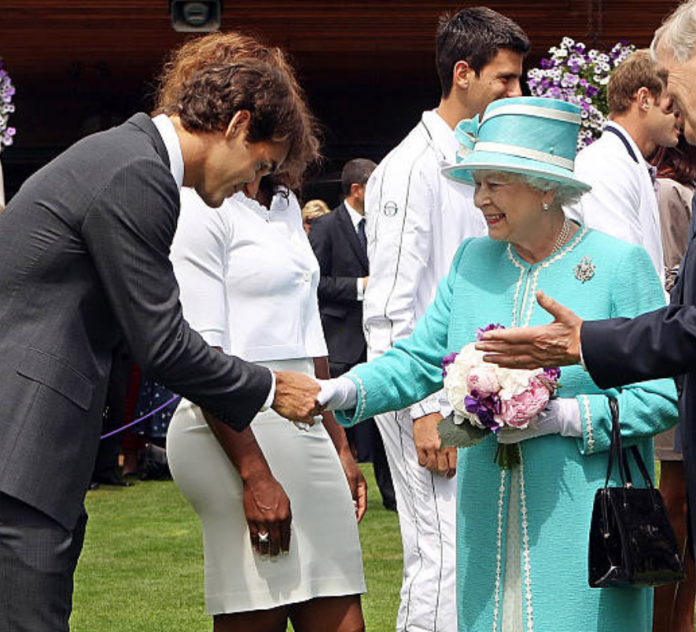 Today, Queen Elizabeth turned 94. Ten years ago, after a 33-year absence, she turned the  usually sedate sanctuary of Wimbledon into an unbridled hive of frenzy.

Maybe it’s the power of memory. Or perhaps it’s the sheer weight of time – 1100 years of unbroken royal rule. Maybe it’s social psychology. Scholars remind us we are all tribal beings. Studies inform us that, simply for survival, we are hard wired to embrace leaders who’ll resist whatever onslaught appears. Or maybe it’s just a matter of us being in an unrelenting celebrity culture and Her Highness delivers a gravitas and notoriety like no other.

So on an unusually warm Thursday morning, Wimbledon’s world of ivy walls and purple petunias is gripped by a royal fever. Gambling parlors announce their odds on everything from the color of the Queen’s dress to the 20-1 likelihood of a streaker while everything at the AELTC — the iconic ivy, the purple petunias, the plans for every move — was all set in place. After all, this is England and no one does pomp ‘n ceremony with such flair and certainty.

Everywhere a buzz excites. An aging solicitor from Cornwall asks his daughter, “can we go for tea up their?”

“No Dad,” the daughter scolds. “That’s off limits — just for Roger and the Queen.”

I presume Her Royal Highness will enter where all VIP’s do, by the Royal enclosure with its imposing Army guards in olive uniforms. But the Queen will foregoes the usual entry to make a grand circular entrance. “There’s a vast sense of anticipation,” noted BBC. Giddy kitchen helpers stare out from the media restaurant. Photographers on a bridge over St. Mary’s walkway joke that the Queen was “looking for her proper spot in the car park.”

While President Clinton came to the U.S. Open with an 11-vehicle convey of security vehicles, the Queen’s appearance was grand, but restrained. Arriving by herself in a small black limo with just modest visible securtity, she strolled by her adoring, deferential subjects. From the modestly rising Henman Hill, to Court 18 where, 13 hours earlier Isner and Mahut had battled so bravely, to the fabled St. Mary’s walk, the still-spritely-after-all these years, 84-year-old (in a bright blue outfit with white accents and a matching old-school blue and white bonnet to kill for and only modest jowls) offered her greeting to the masses, who crowded 14-deep. She chatted with eight-year old Kung Phimlee and ten-year old Alphie Fox of the Royal Tennis Initiative. She spoke with officials and ambled down St. Mary’s walk. The crowd was elated.

Then it was up to the Members Lawn just below the tea room where she greeted four young Brits and a handful of tennis icons. You may know the names: Billie Jean, Martina, Rafa, Venus, Roddick, as well as the Serbs Djokovic and Jankovic. And there, at the very end of the dignified reception line was Serena offering an incredibly deep, well-practiced bow and Federer in a flawless suit.

Then it was time for lunch in the clubhouse. Venus, Virginia Wade and Tim Henman were on hand. None other than the reigning king of tennis, Mr. Federer, sat by the Queen and had a proper chit-chat. The luncheon featured Salmon Millefeuille with Wye Valley Asparagus, a main course of Orange and Honey Marinated Chicken with Fruity Couscous and some Kentish Strawberries and Blackberries with Cornish Clotted Cream and Mint Syrup. Here was British haute cuisine at its cautious best.

For the featured match, Wimbledon passed on the game’s reigning champs and gave the honor to their still emerging, placid local hero Andy Murray, who would face Finn Jarkko Nieminen. When the good Queen, promptly on time, walked in, she got a proper reception – hearty, yet hardly overdone. There was pleasant chatter in the Royal Box and a pleasant straight set win delivered by her loyal subject Mr. Murray. Few imagined he would become a knight. With Tim Henman, Virginia Wade and many a starchy official by her side, Her Highness sat rather stiffly and didn’t applaud until the end when in one zealous outburst she broke out with 50 claps in a row. How emotional can you get?

On this glorious summer day, the Queen readily displayed why she is the stately woman everyone loves to love. As the BBC analyzed Andy Murray’s bows to her in slow motion, Serena admitted she had violated protocol terribly. When meeting her, she just said, “Hey, nice to meet you.” The star-struck Williams added that, “You meet presidents, you meet people, but never the Queen. She’s the Queen.”

Federer reported that the monarch, “was very friendly, very relaxed. You could tell she’s done this a million times. She made everybody feel very special at the table, one of those things you’ll never forget…She knew about my tough first round…She knew about the Isner-Mahut match.” Roger than delivered one of his best lines, claiming the Queen “said I should hit more backhands down the line.” Certainly, that made sense. Just about every royal not named Harry or Meghan, likes to play things down the line.

Eventually, the famously insulated Queen pulled away from the Royal Entrance by herself in her limo – another day at the royal office. To me, there was a hint of loneliness.

“Long live the Queen,” whispered a grandmother from Islington. And Elizabeth has. Ten years later she seems just as spry and just as royal as ever, and even more beloved.