[Reader advisory – it’s best not to take this editorial misadventure too seriously.]

A BNP Paribas press release revealed that the beloved tourney would not be played. Fans were shocked. But Inside Tennis’ fake news department found out that the announcement had been a hoax. The tourney was actually played. Here’s what happened.

• The tennis world fell off its axis when, in an interview with Swiss reporter Rene Stauffer, Federer’s coach Ivan Ljubicic inadvertently revealed that Roger had decided to immediately retire. Tennis imploded. There was so much panic and sorrow that Federer immediately went on a teleconference with the media gathered at Indian Wells to reassure his millions of fans that he’d be playing on. Eventually the frenzy subsided.

• Surprise visitor Margaret Court had a summit meeting with Martina Navratilova. Their “Can’t We Just Get Along?” head-to-head went so well that the fundamentalist minister insisted that her new friend come to her Perth, Australia church and give a guest sermon.

• French Open officials profusely apologized for their unilateral, some would say arrogant, move to change the dates of Roland Garros. Their sudden reversal of the decision to claim the September 20-October 4 time slot prompted fans in the courtside restaurant Nubu to break into a sarcastic version of La Marseillaise. “Hey,” quipped one movie-wise fan from Palm Desert, “This is just like the scene in Rick’s Cafe in the movie Casablanca.”

• The grudge match between archrivals Rafa Nadal and Nick Kyrgios was a colossal, one-sided dud until the Aussie suddenly lost it midway through the third set and topped off his snit-fit by kicking over all of Rafa’s exquisitely aligned water bottles.

• It was bad enough that Ash Barty made a shock announcement. After her opening-round loss to wildcard Canadian Leylah Fernandez, she said she’d had enough of the fierce individualism of tennis. She confided that she craved the embracing, locker room camaraderie of cricket and would immediately be leaving the WTA to return to Australia to play the game she really loves. But that was nothing. Sixteen-year-old Coco Gauff announced her retirement. She gushed, “You know, I always want to be the first. It’s kind of cool to be the first ever teenage tennis superstar to retire.”

• Novak Djokovic’s inspired idea to bring tennis together for a fundraiser for COVID-19 relief was a hit. It raised $6.2 million – what’s not to like? But after about 90 minutes of feel-good fun it became more and more tense as John McEnroe amped up his tone-deaf rants about Hawkeye’s curiously questionable calls. As Mac became increasingly offensive, a courtside fan yelled, “I’m Tony from Chicago. This is just an exhibition, jerk!” Eventually, even McEnroe’s doubles partner, ice-cool Bjorn Borg, had had it. The Swede smashed his vintage Donnay wooden racket, barked at the New York legend, “You can’t be serious!” and walked off, bringing the fundraiser to an abrupt ending.

• Incredibly, in the fourth round, Serena and Kim Clijsters again faced each other, in a replay of Indian Wells’ most controversial match – their 2001 final in which fans booed Williams. But this time, the oh-so-sweet Clijsters lost it. Inexplicably, she snapped a towel out of the hands of a shocked ball girl and repeatedly barked at the ump. Fans were not pleased, and promptly booed one of the most lovable players in history. As Williams did in 2001, Clijsters ignored the cascading howls and went on to save five match points en route to a thrilling 4-6, 7-6(5), 7-6 (8) win that didn’t finish until 1:07 AM.

• Clijsters then continued her magic. The 36-year-old was dominating Sofia Kenin 6-2, 5-1, and seemed poised to reach the semis, when she heard her 11-year-old daughter Jada call out from the Friends Box, “Mom, this is boring! I’m outta here!” The embarrassed Belgian promptly lost twelve games in a row. In her press conference, Clijsters confided that when she was 11, she was just as strong-minded as her daughter. She sighed: “Yeah, Jada was my inspiration to make this comeback, but forget it. I’m never going to bring my kids to a match again.”

• After the electronic scoreboard on Stadium 1 featured fan Fred Fuddraker in section 118 making out with his mistress, the prominent Palm Springs attorney filed a $12.2 million invasion of privacy suit in the Riverside County Superior Court.

• Speaking of lawsuits, after the ITF officially anointed the BNP Paribas Open as the sport’s fifth Slam, the ATP’s other eight Masters tourneys protested vehemently and filed a class-action lawsuit.

• Guess what? The non-stop campaign of tennis’ most charismatic couple, Gael Monfils and Elena Svitolina, worked. Tournament officials announced that in 2021 Indian Wells would include a mixed-doubles championship (plus the first-ever $1 million pickleball championship).

• Political analysts were dumbstruck. Why in the world would Democratic Socialist Bernie Sanders come to the Republican hotbed of Indian Wells to announce he was ending his presidential run? Before thousands of feel-the-Bern fans in Stadium 1, the senator explained he wanted to give his last speech as a presidential candidate in Indian Wells because he so loves tennis. Then he rambled for 16 minutes, telling endearing tales of playing tennis on the hardscrabble public courts of Burlington, Vermont.

• Other desert developments included the appearance of the much-celebrated 49-year-old Andre Agassi with hair, the announcement in a courtside interview by Prince Harry and Serena pal Meghan Markle that they’ve already had it with independent living and would be returning to the royal family, and the stunning decision by Bob and Mike Bryan that, on the eve of their retirement, they’ve broken up and will be playing the rest of the season with their new partners, Rajeev Ram and Jamie Murray.

Other than this, Indian Wells was pretty uneventful. 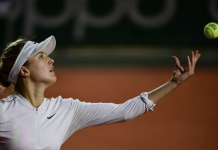