It’s certain. The wave of retirements coming to tennis’ shore is about to hit. In Australia, Caroline Wozniacki stepped aside. The Bryan brothers will quit at the US Open. Now Maria Sharapova, 32, has announced her retirement after a dazzling, complex and sometimes controversial career in which she became No. 1, captured a career Slam, twice won the French and famously overcame injuries and a suspension – but not her fiercest rival.

For 15 memorable years she was her very own, unique brand – as Russian as vodka, more American than Starbucks. She was tennis’ Ninotchka, a loyal native with Mother Russia deep in her soul. At six she ventured to the West and soon was intoxicated by it all – glitz, glamor, glory, and freedom.

Of course, other notable Russians have come to our shore – dancer Mikhail Baryshnikov, writer Aleksandr Solzhenitsyn and tennis goddess Anna Kournikova. But no “ova” so adeptly bridged and embodied the prime geopolitical reality of the past 75 years – the Russian-American divide.

Sharapova was born in the Soviet Union two years before the Berlin Wall fell. Her parents lived 80 miles from Chernobyl and fled the nuclear plant’s implosion. Was there a greater symbol of Soviet failure? They went to Siberia. Is there a region that so evokes totalitarian dread? And then Maria’s Dad, with less than $1,000 in his pocket, left his wife and country and took his daughter to Florida, the land of tennis factories.

Soon Maria morphed into an American. Her American English was bright and lyrical. Her blithe lifestyle was easy and free. She looked like a Vogue model, her mind was keen. She drove a Porsche, hosted disco parties and chatted with Paris Hilton. She became a social media force and the most successful sports businesswoman in history. The 6’ 2″ blond seamlessly fused her ability to hit deep down-the-line backhands with her good looks, her relentless entrepreneurial drive and savvy smarts that once enabled her to become the world’s wealthiest woman athlete. Twenty-five million dollars a year – that works.

Rolling Stone Magazine observed, “Sharapova is tall, white, and blond, and, because of that, makes more money in endorsements than Serena, who is black, beautiful, and built like one of those monster trucks that crushes Volkswagens at sports arenas.” Maria’s agent predicted she would become “a brand as universally recognized as Calvin Klein, BMW and Rolex.” Her roots were in communism, but few athletes were more capitalist. At the end of her career, her $325 million in earnings ranks second in women’s sports, just behind Serena. She’s estimated to be worth between $135 and $195 million.

She was the American dream incarnate, but Masha (as her friends call her) always insisted that inside she still was very much a Russian. In Moscow, massive billboards once blasted her image. She was a FOP – friend of Putin. She jogged with an iconic torch in the Sochi Olympics stadium and played for Russia’s national teams.

The Wall Street Journal said that Sharapova was the “most public face of the new Russian woman – talented, self-assured, ambitious and independent. Until recently, there were almost no such women in Russia.” More than anything, Maria often spoke longingly of her beloved Russian food, family and heritage.

Okay – but you could have fooled us. Sharapova loved American pop culture and stylish Audrey Hepburn-like black frocks. Sequins and elegance – strike a pose. She lived in LA by the warm Pacific, dated a hot Laker and a young Bulgarian, Grigor Dimitrov. She shot cold penetrating glances to those who crossed her, and was about as sizzling a CEO as any MBA could imagine.

From the get-go, her gruff, pushy, but oh-so-successful dad Yuri envisioned she would be a winner. “My baby’s a champion,” he gushed after her first great triumph at Wimbledon in 2004. “She was born to be a champion,” he told me.

Encouraged by Martina Navratilova, Papa Yuri came to America to seek his family’s fortune through his slim kid. He washed dishes and pedaled with her on his bicycle to Florida tennis lessons. Then, he took her to Southern California where the Dutch drill-meister Robert Lansdorp perfected her punishing groundstrokes. Flat and fast – they were as good or better than those of Jennifer Capriati or Lindsay Davenport. Okay, her movement was suspect. Her serve was a riddle she never really solved. Rarely comfortable at net, she famously admitted that when she played on clay she was like “a cow on ice.” Simon Barnes asserted that with Maria, “There is a strange kind of awkwardness about her. She’s a rare mixture of grace and clumsiness, like a young horse that forgets how to count up to four in legs.”

Some dismissed her. After all, before Maria, blond supermodels didn’t win too many Slams. But Maria insisted, “If people want me to be a tennis babe, I’m sorry. I’m not going to be one…I’m not the next Kournikova – I want to win matches!”

But there was no escaping the most controversial grunt in tennis. John Newcombe said it was “legalized cheating.” The tabloids said it was louder than a lion’s roar. Mary Carillo once noted that Maria was “not hitting as hard as she’s sounding. She’s over-grunting.” At one French Open, Ben Rothenberg claimed she sounded “yelpier than usual, like a Bichon Frise when the postman comes.”

From the outset, analysts sensed Maria had the potential to deliver. In ’04, IT’s Matthew Cronin predicted, “Sharapova has all the tools to make it big: more than a little ‘tude and a seemingly unswerving commitment…[If] Sharapova goes deep in ‘04, she’ll nudge the likes of Olga Morozova, Natasha Zvereva and Kournikova into a certain Gulag of oblivion.”

Maria did just that. Just months after Cronin’s prediction, the stamp-collecting 17-year-old scored the greatest breakout win in women’s tennis history, when she shocked Serena to claim the 2004 Wimbledon. After that win, in an interview with Inside Tennis, future president Donald Trump made a now controversial comment: “Sharapova to me is very beautiful, her gait is magnificent, and those shoulders. You don’t often say, ‘Gee, she has beautiful shoulders,’ but her shoulders are…” Trump also contended that Serena, “looked across the court and said to herself, ‘I’m playing against a supermodel.’ I think it had an impact.”

Maria’s heady impact drew doubters. Writer T.J. Simmers complained that the 17-year-old was too young to appear in a sexy WTA ad. Martina Hingis wondered, “What will happen when her first great love comes along?” Carillo suggested that, in the future, Sharapova will “screw it up, not personally, but she’ll screw it up the way Capriati did and Kournikova did. Phenoms tend to get their lives screwed up, whether they want to or not.”

But the steely Sharapova insisted, “It’s Maria time!” as she went on to have one of the great careers in WTA history. A social media juggernaut, she was on the cover of hundreds of magazines. Few others have brought more attention to the game.

The toughest of three generations of fierce Russians, she was the first from her nation to be No. 1. She reigned for 25 weeks. She could score quick knockouts, or grind in marathons, and she adeptly avoided many an upset. During matches we saw her world-class poker face as she became engrossed in her own private universe. Her focus rarely wavered. Maria didn’t so much “stroke” her way to victory, she willed herself. You’d sense it, see it, hear it. Claw, grunt, fist-pump – she was always in the moment. One withering stare after another, cold and penetrating, said it all: “Don’t mess with Masha.” Her ferocity was louder than her grunts.

Her father said he didn’t care about the world or his wife – just himself and his daughter. But Maria’s imperious ways, her wealth, her sound and her beauty drew criticism. Russian Alla Kudryavtseva said, “It was very pleasant to beat Maria. I don’t like her outfit…It was one of the motivations to beat her.” Conchita Martinez contended, “What girls like Sharapova want to do is sell at any cost…If they told me that I must play in a bikini, I wouldn’t do it.”

Sharapova countered, “Beauty sells…I’m not going to make myself ugly.” Fair enough. While some like Kim Clijsters went out of their way to make friends, Maria did little to ingratiate herself. To her fellow Russians, she was an American with an insufferable father. Anastasia Myskina said she wouldn’t play Fed Cup if Maria was on the team.

Maria defended her lone-wolf ways, saying, “It’s tough playing tennis and being Mother Teresa at the same time and making everyone happy.” Serb Ana Ivanovic said, “It’s strange, Sharapova doesn’t say a word to anyone, whereas I talk, smile, laugh.”

But no one laughed her way to the bank more than Maria, a profitable practice which didn’t please all. Brit Dan Jones harshly charged that Maria was too corporate and had “as much ethical integrity as a bag of salt.” Still, few had more pride than hard-working Maria. In 2008, when she suffered a devastating shoulder injury, many agreed with broadcaster Annabel Croft, who observed, “I can’t see her coming back.” When she bravely returned,  Maria said, “If I was mentally weak, I wouldn’t be here. I’d be on some island, with a nice, cold piña colada and a nice, cold towel by the pool.”

Yes, she endured a lopsided 2-20 record against Serena. She never broke Willams’ imposing code, and off-court there were spicy clashes. Maria admitted that she was “a stubborn piece” and soldiered on. She confided that if it weren’t for tennis, “I’d be back home helping my mother pick raspberries.”

Of course, many have given her the raspberry. We won’t dive into the controversial matter of a role model like Maria creating a sugar-laden candy – Sugarpova. More to the point, Maria was suspended for 15 months in 2016 for the use of energy-boosting meldonium. Many insisted she broke the rules and it was simple – she won by cheating. Plus, they are quick to note that when she returned, while she was treated royally, she won just one tourney and only once got past the fourth round of a major. Maria proclaimed her innocence, played on through the noise and spoke of the shoulder issues that had long plagued her.

Mary Carillo said, “If you expect anyone to die with their boots on, it’s Sharapova.” Maria confided, ““I’ve played tennis since I was 4 years old, so the idea of not playing and not having anything to do at all actually scares me.” 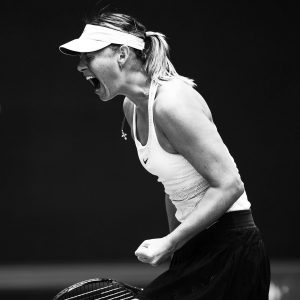 Masha’s backers brushed aside the fact that she hadn’t won a Slam match in more than a year and fell off a cliff in the rankings – she’s No. 373. They noted that few ever worked harder than Sharapova and she greatly boosted the game, gained more appeal than most any star in the history of women’s athletics not named Williams, became a UN Goodwill Ambassador, was a major force for healing at the Chernobyl nuclear site, and shined bright on magazine covers, on center courts, on runways and in boardrooms. She had sizzle. And what other Russian-American has come close to doing all that? Maria wrote, “My path has been filled with valleys and detours, but the views from its peak were incredible.”